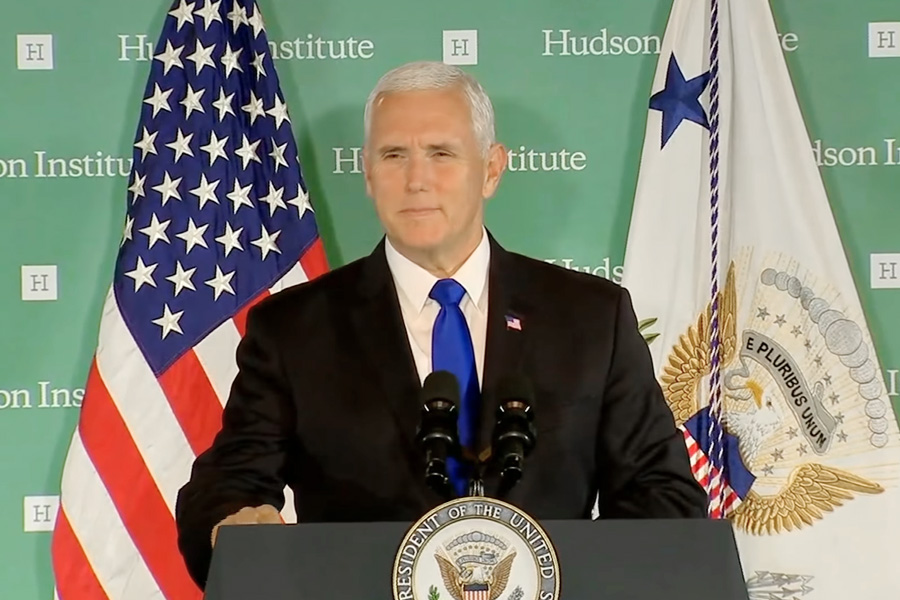 ◎ “Strategic competition” between America and the PRC has stepped up several notches.

Heading into the final quarter of 2018, it has become clearer that “strategic competition” between the United States and the People’s Republic of China (PRC) has moved up several notches.

On the U.S. side, President Donald Trump called out the PRC’s attempt to interfere in the November midterm election, while Vice President Mike Pence laid out how the Chinese Communist Party (CCP) has been undermining America in recent history. On the same day as Pence’s speech, Bloomberg News reported that the PRC had infiltrated nearly 30 American tech companies, including Amazon and Apple, through tiny microchips mounted on server motherboards. Other U.S. news media outlets report that the U.S. Pacific Navy Fleet is planning operations in the South China Sea and Taiwan Strait in a week in November as a global show of force to the PRC. Taking U.S. action and remarks on the whole, the CCP is being put on notice.

Meanwhile, the CCP continues to misread the Trump administration and America’s resolve in standing up to the Chinese regime’s pernicious behavior, including economic aggression and expansionism, military build-up, influence operations, and human rights abuses. Instead of negotiating trade in good faith with the United States, the CCP has denied its misdeeds and claimed “victimhood.” At the same time, the CCP has sought to influence U.S. business and intellectual elites into rejecting President Trump’s China policy, while running propaganda in American newspapers to achieve similar purposes. The CCP’s strategy, as we analyzed in August, is likely a gamble on the outcome of the U.S. midterm election in November shaping out “in a manner that allows it to avoid a consequential clash with America.”

The rules of the game in China-U.S. relations have fundamentally changed. The Trump administration is operating in the framework of a new geopolitical reality, while the CCP and others seek a return to the status quo of the past two decades. The difference in operational framework will strain bilateral relations in the days to come, and will result in a prolonged trade war.

Our take
SinoInsider has correctly identified trends in Sino-U.S. relations since the start of the year:

We have been able to accurately read and anticipate developments in Sino-U.S. relations partly because we have a deep understanding of CCP elite politics and its operations. To paraphrase Sun Tzu, knowing the enemy is at least half the battle won.

What’s next
We believe that the “new Cold War” will not turn into hot conflict, and neither the PRC nor the U.S. desire that outcome. In his recent speech, Vice President Pence noted that “competition does not always mean hostility, nor does it have to.” Meanwhile, the PRC is struggling to cope with a continually weakening economy, and is still in the process of modernizing its military and preparing it to be combat-ready.

A weakened tiger, however, is desperate and dangerous. The CCP could resort to asymmetrical hybrid warfare tactics and rely on its propaganda apparatus to escape mounting U.S. pressure and try to come out ahead in the era of strategic competition. The Bloomberg article on Chinese microchip infiltration and Pence’s comments about the CCP’s attempt to exploit divisions hint at the regime’s potential to cause disruption (we explored the CCP’s military threat here).

It is unlikely that Sino-U.S. tensions will be resolved even if the CCP “caves” after the U.S. midterm election, tries to be more conciliatory, and makes some tangible concessions on trade.

The CCP would view “strategic competition” with America as a life-and-death struggle, especially if the Trump administration increasingly ties human rights and ideological issues with trade. Xi Jinping also will not likely give up too much on trade due to internal resistance and Party culture. That being said, we analyzed that Xi ended presidential term limits because he wants to reform China, so it would not surprise us if he does proceed with genuine “reform and opening up” against difficult odds. Indeed, there is the precedent of an ethnic Chinese dictator (Taiwan’s Chiang Ching-kuo) voluntarily turning his country into a democracy, but not before a period of power consolidation and intense domestic repression. China may yet see tremendous positive change depending on Xi Jinping’s future actions.

We believe that the Trump administration is approaching trade with China in a similar fashion as North Korean denuclearization, that is “maximum pressure” and no compromise until the other party takes tangible steps to change their behavior. Behavior change could lead to other logical outcomes. In analyzing the U.S. National Security Strategy, we wrote in January that President Trump is in a “strategic chess match” with the PRC and is “aiming for an endgame that could potentially surpass Ronald Reagan’s most significant foreign policy accomplishment.”

Another factor to watch is Trump’s different treatment of Xi Jinping and the PRC. Despite making an offhand comment that they might not be friends anymore, Trump has been consistent in talking about his respect for and good friendship with Xi. The friendship between Trump and Xi may prove to be a catalyst for change in China if Trump sticks to his “maximum pressure” campaign.

Get smart
SinoInsider predicted a trade war six months before it became official. Our other predictions on China, North Korea, Taiwan, and Sino-U.S. relations are in the process of being verified as developments unfold.

Businesses and investors that rely on our insights into China and its geopolitics have a good amount of time to adapt to the new global environment and turn potential pitfalls into opportunities to lead the competition. For more about our services, contact us.