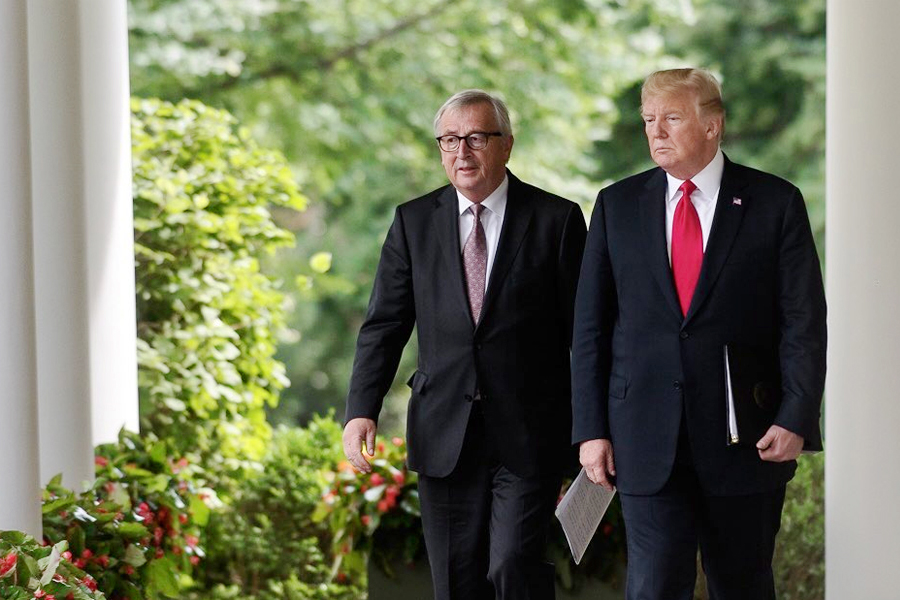 ◎ The new U.S.-EU trade agreement, while still being finalized, would likely come to be seen as a watershed in Trump’s effort to rebuild the global order.

United States President Donald Trump and European Commission president Jean-Claude Juncker announced a new U.S.-EU trade agreement after meeting at the White House on July 26. Trump and Juncker both indicated that the goal was to “work toward zero tariffs, zero non-tariff barriers, and zero subsidies on non-auto industrial goods.”

The new deal will see:

In an interview with Fox News, Larry Kudlow, head of the National Economic Council, said: “The United States and the EU will be allied in the fight against China, which has broken the world trading system, in effect. President Juncker made it very clear yesterday that he intended to help us, President Trump, on the China problem.”

Also on July 26, U.S. Treasury Secretary Steven Mnuchin told CNBC that he had discussed “very significant WTO reform” in conversations with his counterparts at a recent G20 meeting. Mnuchin called the reform “WTO 2.0.”

The big picture:
President Trump first announced tariffs on Chinese imports in March this year. The first wave of tariffs on $34 billion worth of Chinese goods went into effect on July 6. In an interview with CNBC on July 20, Trump said that he is willing to impose tariffs on all $505 billion Chinese exports to the U.S.

Meanwhile, the Chinese regime has been courting Japan, South Korea, the EU, and other countries on trade since Trump threatened tariffs. According to Reuters, Beijing had pressed the EU to form an anti-America trade alliance with China in early July. Other news outlets later reported that Europe had rejected Beijing’s proposal.

Our take:
1. Since his election, President Trump has been taking actions which suggest that he is withdrawing America from the post-WWII world order and creating a new world system. Notable actions include pulling out of the Trans-Pacific Partnership and the Paris climate accord; starting trade conflicts with allied nations and China; withdrawing the U.S. from the United Nations Human Rights Council; and forging closer ties with Taiwan.

The new U.S.-EU trade agreement, while still being finalized, would likely come to be seen as a watershed in Trump’s effort to rebuild the global order. Trump said on July 26 that the U.S. and the EU account for “more than 830 million citizens and more than 50 percent of the global GDP. In other words, together, we’re more than 50 percent of trade.” The size and scale of the new U.S.-EU trading bloc mean that other countries would naturally gravitate towards it. Put another way, a successful U.S.-EU trade deal has potential to be the foundation of a new global economic alliance and a substitute for post-WWII world organizations like the UN and the World Trade Organization (WTO).

2. If President Trump is indeed hitting the reset button on the existing world order, he has an excellent reason for doing so. The Chinese Communist Party (CCP) has been gradually hijacking the post-WWII global system since the People’s Republic of China (PRC) was admitted to the UN in 1971. Human rights groups and other organizations have long pointed out the CCP’s efforts to interfere with the UN human rights mechanisms, such as intimidating UN officials and independent experts involved in specific human rights issues, and limiting visits by UN experts to China. In one notable case, the PRC challenged and blocked a ruling by the UN Human Rights Council president called for by NGOs to allow a moment of silence for Chinese activist Cao Shunli after she died in detention.

Also, the PRC recently came to head the Task Force on Donation and Transplantation of Human Organs and Tissues of the World Health Organization (the WHO is a specialized agency of the UN). That the PRC would now offer WHO member nations “policy advice and technical support on improving regulations and protecting human rights” is hugely ironic given that the CCP is harvesting the organs of still-living prisoners of conscience, the bulk of whom are Falun Gong adherents. In 2016, the U.S. House of Representatives unanimously voted to pass legislation condemning the Chinese regime organ harvesting. U.S. lawmakers have said that they are working on passing similar legislation in the U.S. Senate.

The Chinese regime’s efforts to undermine the U.S.-led, rules-based world order grew more vigorous and pronounced after the PRC joined the WTO in 2001. The PRC often seeks to constrain other nations using WTO rules by lodging complaints while it wantonly flouts them. Despite promising to lower trade barriers and pledging not to force foreign firms to transfer their technology, the PRC is guilty of both and the other unfair trading practices mentioned by Trump in his press conference with EU president Juncker. The CCP also resorts to propaganda, disinformation, and corruption when engaging in global trade, and its pernicious behavior has gradually influenced other countries in the nearly two decades since the PRC’s admission to the WTO.

Trump has frequently pointed out that China started a trade war long ago and the U.S. had already lost. Indeed, it would not be a stretch to say that the CCP was winning a new cold war against America until Trump took office. And the recent remarks by Larry Kudlow about the U.S.-EU trade deal and China seem to indicate that the foundations of a global anti-CCP alliance has been laid (we believe there were signs in 2017 that the U.S. could be forming a global anti-communist front).

3) We believe that Trump no longer wants America to be part of the CCP-hijacked world order and is seeking to build a new rules-based, reciprocal global trading system. Such a system could later become the foundation of a new intergovernmental organization, should there be a need. The new U.S.-led world order, when established, would almost certainly isolate the PRC and become the final nail in the coffin for the CCP, who is currently facing intractable economic and social problems on the mainland. China would see tremendous change when the CCP’s many problems (see here, here, and here) come to a head. To mitigate risk and seize opportunities before change arrives, businesses in China and would-be investors must account for political risk when planning ahead.