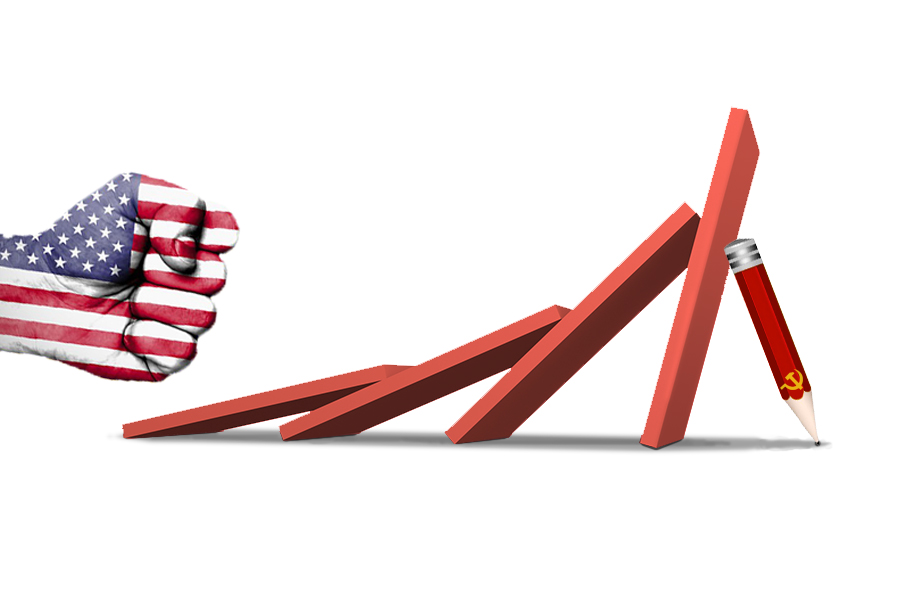 ◎ The Sino-U.S. trade war is proving to be a quagmire for the CCP propaganda apparatus.

Much reporting on China’s response to the Sino-U.S. trade dispute is focused on official statements and remarks from senior officials or scholars. Readers of those responses can be forgiven for believing that China as a whole steadfastly opposes trade action by the United States.

The sentiment on the ground in China on the trade conflict is the opposite of official rhetoric. Chinese netizens have been mercilessly mocking the Chinese Communist Party’s (CCP) propaganda ever since Party and state media started attacking the U.S. for planning to levy tariffs on Chinese goods in late March. Online chatter points out logical loopholes in CCP propaganda (“why is China only buying more from U.S. products for ‘the benefit of the people’ under American pressure, and not in the many years before?”). Netizens also poke fun at the CCP when it struggles to smooth out or reverse earlier propaganda that has become redundant or self-defeating with new and hard-to-predict developments in the trade conflict. Using allusions and backhanded logic (almost certainly to evade censors), Chinese netizens are even encouraging the U.S. to escalate the trade war to defeat the CCP. During the three rounds of Sino-U.S. trade talks, Chinese netizens expressed great skepticism over the CCP’s “win-win victory” rhetoric, and believed that China was the losing party in the negotiations (see our article).

After several rounds of shooting itself in the foot, the CCP shifted its rhetoric on the trade war to cope with the U.S. tariffs announced in mid-June (see our article). Several news outlets reported instructions from Beijing to the propaganda apparatus to refrain from criticizing U.S. President Donald Trump (but instead blame the U.S. government) and to soften commentary on American trade action. In July, the People’s Daily ran a three-part commentary series to criticize “pompous, arrogant writing” that it claimed inspired inflated sentiments in the population about China’s actual economic abilities.

Despite the change in propaganda strategy, the CCP continues to lose control over the narrative. Two recent examples are revealing of this phenomenon.

On July 10, state mouthpiece Xinhua published a commentary titled, “In Fighting the Trade War, China Has the Ability to Pay Part of the Price.” The article described the trade war as a “battle for the nation’s fate”; claimed that the Chinese people “deeply understand” that “the nation comes before family”; and asked the people to “endure the difficult period with a responsible government.” Chinese netizens pointed out that the trade war actually threatened the CCP’s fate more than China’s, and that “the country comes before family” idea was a perversion of Confucian teachings that ranked the family before the nation. Netizens also scoffed at the idea that the CCP was a “responsible government,” pointing out that the Chinese people have difficulties in affording healthcare and registering for schools, among a list of other problems. They also requested that Chinese officials should make public their assets, an oblique reference to severe corruption in the official ranks. As the criticisms mounted, Xinhua later retracted the commentary.

On July 12, China’s Ministry of Commerce published a statement criticizing the U.S. Trade Representative’s (USTR) Section 301 trade action on July 10. In six points and about 1,800 characters, the Commerce Ministry accused the U.S. of “distorting facts” and having “no international legal basis” for levying $200 billion worth of tariffs on Chinese products while portraying China as the victim of U.S. trade policies. Xiakedao, a commentary arm under Party mouthpiece People’s Daily, wrote a piece on the Commerce Ministry’s statement and published it on various portals like WeChat and Sohu. According to qnachina.com, a website that tracks and collects WeChat posts, the Xiakedao article on WeChat saw a “train wreck” of a situation when it was flooded with negative comments after it was posted 11 p.m. on July 12, or after the “Internet Water Army” (Chinese internet astroturfers) were not at work to “water down” the negative sentiment. Many of the negative comments noted that it was ridiculous for the CCP to rebut the USTR’s detailed 200-page report on China’s trade transgressions with a 1,800 character statement, with the implication being that the CCP did not bother to properly address the USTR’s findings before condemning it and the U.S. tariffs. At the time of writing, the WeChat comments under the Xiakedao article cannot be accessed. The over 1,000 comments under the Sohu version are mainly positive, but come from only 148 accounts. The Sohu version has been viewed 3.05 million times.

Why it matters:
Since Deng Xiaoping was in office, the CCP has come to rely on the gun (the military), the pen (propaganda), and the purse (economic prosperity) to maintain its political legitimacy and social order. With rule by martial law virtually out of the question and an economy that is fast worsening, the CCP only has propaganda left to buttress its authority and prevent regime-destabilizing social chaos. Political risks heighten greatly for the CCP when its propaganda apparatus can no longer control the narrative on the mainland.

Our take:
1. The Sino-U.S. trade war is proving to be a quagmire for the CCP propaganda apparatus, at least on the domestic front. The CCP loses face and sinks into the mess of its own creation if it says little or nothing, and sinks faster when it resorts to the standard “nation-building” rhetoric or goes on the attack. In other words, the CCP’s inability to cope with the trade war has caused it to lose control of the narrative at home, and as a result, control over society. Observers of the trade war who do not track the sentiment on the Chinese internet are missing a significant portion of the picture.

The CCP’s trade propaganda, however, seems to still have a certain effect beyond China’s shores. Official CCP response to the trade war is clearly aimed at depicting China and the Chinese economy as being robust enough to cope with a trade war. The Chinese regime’s statistics bureau has even published inaccurate economic data several times this year to bolster the impression that the Chinese economy is handling U.S. trade pressure well (see here and here). Yet Western and international media have been taking official Chinese data, statements, and remarks by officials at face value, and do not qualify that the data or comments are propaganda tactics, and hence are part of the CCP’s overall propaganda and disinformation effort. Indeed, the CCP might be in more serious trouble at this stage if the world realizes that the CCP has been bluffing about China’s economic abilities and capacity to withstand a trade war all along.

2. Social tensions in China would rise when CCP propaganda becomes more ineffective and the Chinese economy worsens, and the CCP and its leadership would face increased political risks. Foreign businesses in the mainland should pay close attention to the social situation to better gauge political risk in China when making plans.

3. The Sino-U.S. trade war has trapped the CCP propaganda apparatus between a rock and a hard place, a rare situation. If the U.S. government takes the opportunity to implement targeted counter propaganda and disinformation strategies, the CCP will find it hard to maintain its Potemkin village. And when CCP propaganda collapses, people in China and elsewhere would discover that the Chinese regime is a “plump-looking cancer patient.”