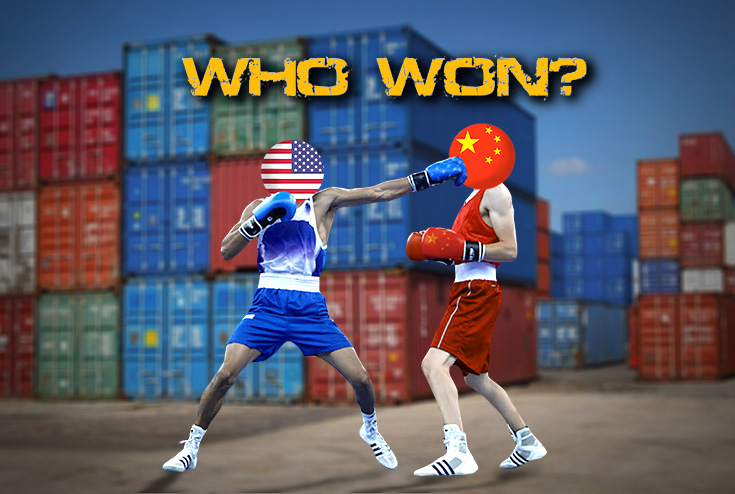 ◎ The U.S. is both winning the trade war with China and weakening the CCP regime.

China and the United States are split on which side has the upper hand in the wake of Sino-U.S. trade talks in Washington.

Western media outlets and scholars have nearly unanimous in the assessing that America has not won anything, and has, in fact, “lost” the trade discussions with China. Scholars and journalists say that the U.S. got nothing substantial from the talks despite getting China to agree to buy more American products and promising to make structural changes to the Chinese economy. China, they say, had previously made empty pledges to open up its economy, and China buying more U.S. goods is not a long-term answer to the trade and intellectual property problems America has with China. Meanwhile, scholars, journalists, and lawmakers also believe that the Trump administration should not grant a reprieve to ZTE on national security grounds. On May 22, the Senate approved an amendment which prevents Trump from easing sanctions on the Chinese tech giant without certifying to Congress that ZTE is complying with U.S. law.

In China, mixed messages are being sent on the outcome of the Washington trade talks. Before the joint Sino-U.S. statement, state publications like the Global Times and China Youth Daily cautioned the Chinese delegation led by State Council vice premier Liu He against signing an “unequal treaty” with America. After the joint statement was released, state outlets like Xinhua declared a “win-win” victory for China and America. Many Chinese netizens have since mocked Xinhua’s “win-win” assessment, and believe that China was the losing side in the trade discussions.

SinoInsider believes that at the current stage of trade negotiations, the U.S. is both winning the trade war with China and weakening the Chinese communist regime. We examine state media rhetoric and pessimistic sentiments on the ground, China’s actions to open up its economy, and offer our take of what the Trump administration might have in mind when talking trade with China.

Mixed messaging in China:
1. Two state publications, China Youth Daily and Global Times, created the impression that Liu He was going to sign an “unequal treaty” (a reference to unfair treaties that China signed with colonial powers near the collapse of the Qing dynasty) before China and America released a joint statement on May 19.

In a May 18 article, the Global Times explicitly warns the Liu-led Chinese delegation against bringing home an “unequal treaty.” According to the article, “the Sino-U.S. discussions can only have two outcomes: win-win or lose-lose.” Around the same period, the Communist Youth League shared on its official Weibo account a picture juxtaposing elderly Qing officials meeting Western powers to sign a 1901 accord to end the Boxer Rebellion with a meeting between Chinese and American officials at the recent trade talks. The picture, which implied the signing of an “unequal treaty,” was later removed from the Communist Youth League’s Weibo account.

As the Global Times and the Communist Youth League have long associations with the Jiang Zemin faction, there is a distinct possibility that Xi Jinping’s rivals were trying to hint to the Chinese people that the Xi administration could cave to the U.S. on trade issues.

2. All major state media outlets declared the Washington trade talks a “win-win” victory for China and America after the release of the joint statement. Global Times editor-in-chief Hu Xijin, however, wrote on his Weibo account that the Chinese delegation had made “so many concessions” and wondered if “the people feel hurt.”

3. Overseas Chinese language media like Duowei News and the Chinese edition of Radio France Internationale indicated that it was China, and not the U.S., that was the losing party in the Washington talks.

In a May 21 article, the Beijing-based Duowei wrote that the May 19 joint statement was “neither the Plaza Accord nor an unequal treaty,” and proceeded to make a strained argument that China was neither a “loser” nor a “big winner” of the trade talks. The article also noted that China had won “time and space” in the negotiations, and that America “had won more” if one was forced to keep score.

4. Chinese censors have been blocking or deleting comments that China has “lost” the trade war underneath Weibo posts on official state media accounts. For instance, a post on the May 19 joint statement attracted 648 comments as of May 22, but only 15 comments which expressed positive sentiments (“win-win,” “benefits both countries”) were visible. In other words, the 633 hidden comments almost certainly noted that China was the losing party in the trade talks. Many comments expressing similar sentiments on the People’s Daily Weibo account also appear to have been deleted. 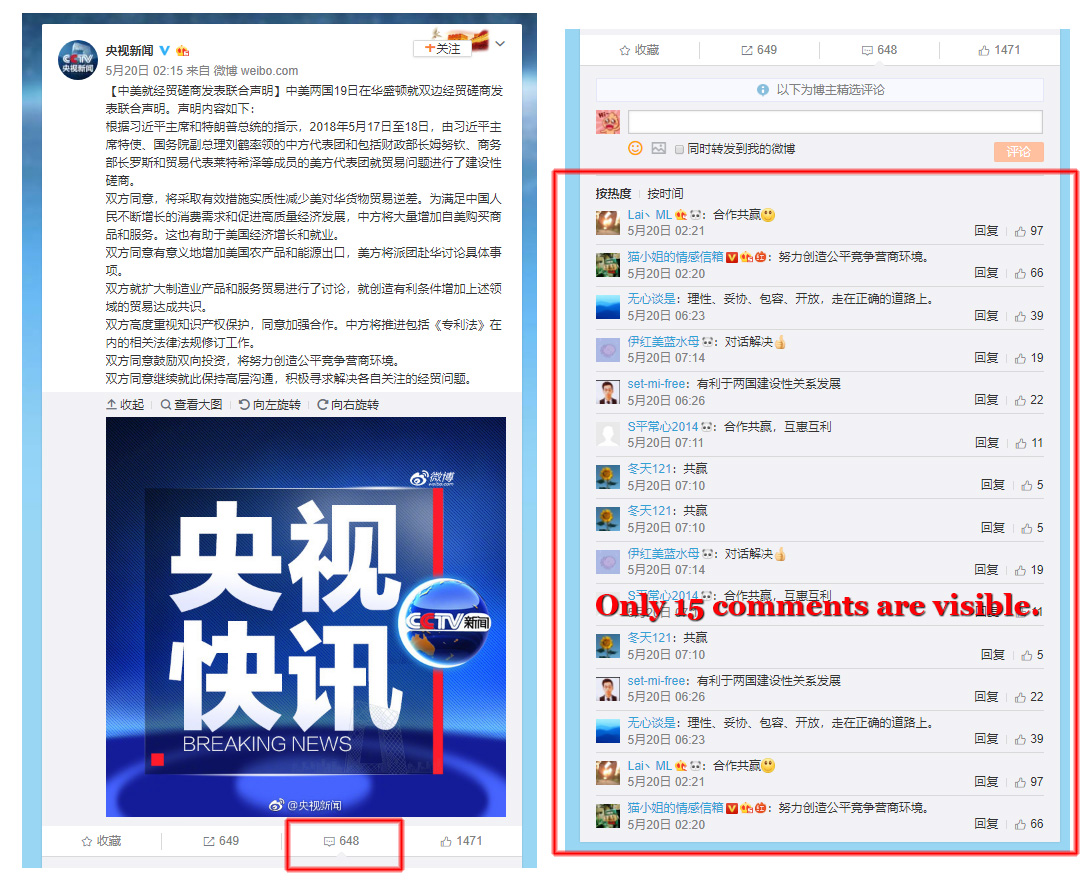 3. On May 13, Bloomberg reported that China’s commerce ministry said it was speeding up the review of Qualcomm’s purchase of NXP Semiconductors. On May 18, The Wall Street Journal quoted a Beijing official as saying that the deal was looking “more optimistic now.”

4. On May 15, China cleared Microchip’s purchase of Microsemi. Two days later, Chinese regulators approved of Toshiba’s sale of its chip unit to a consortium led by Bain Capital.

5. On May 18, the People’s Bank of China announced a series of measures to support cross-border renminbi flows.

6. Zhu Min, the head of Tsinghua University’s National Institute of Financial Research, said at a Beijing forum on May 19 that China is opening up its markets to create international financial markets that adhere to international standards.

7. On May 22, China announced that it is reducing its auto tariffs from 25 percent to 15 percent starting July 1. Tariffs for auto parts would also be slashed to 6 percent from 8 to 25 percent previously.

The American view:
1. President Donald Trump tweeted in April that America cannot lose a trade war with China when it is already “$500 Billion DOWN.” For the Trump administration to get Beijing to agree to buy more energy and agricultural products to reduce the trade deficit should count as a win for America. In fact, it is hard to make the case that the U.S. lost the trade negotiations so long as the current trade gap doesn’t widen.

2. Critics of the Trump administration appear to believe that ZTE and China must be punished now to safeguard national security and secure a win for America. But if ZTE collapses and trade tariffs cause problems which trigger widespread social and political instability in China, the U.S. and global economies would be immediately imperiled. A better way to preserve U.S. national security would be to grant ZTE a reprieve from the ban on buying American goods and services, but place it on strict probation and restrict its U.S. exports on national security grounds. Huawei, which is reportedly under U.S. criminal investigation, can also be put on notice in a similar manner.

3. Trump seems to be adopting a salami slicing, long-term strategic approach to dealing with the Chinese Communist Party (CCP) threat. Any sort of trade deal which forces the CCP to open up China’s economy would weaken its control over the mainland and its ability to carry out influence operations or military action abroad. And should Beijing fail to make sufficient progress in making structural changes to open up its economy, Trump can impose tariffs and start the trade war proper, or threaten to fully reinstate sanctions on ZTE and heavily punish Huawei. After China opens up its economy as per its WTO commitment, the U.S. would be able to better close the trade deficit between the two countries, and the world would enjoy fairer trade with China.

4. The Trump administration would unlikely be able to see a $200 billion reduction in the trade deficit by getting China to buy more energy and agricultural products, or by selling China whatever America is allowed to sell under current market restrictions. Trump may demand that China purchase U.S. cloud computing, internet, and financial services (with verifiable guarantees of IP protection) to hit the $200 billion figure. Beijing would have immense headaches in finding ways to fix its Great Firewall when it has no choice but to buy the above mentioned services.

5. Trump linking Sino-U.S. trade negotiations with North Korean denuclearization and peace talks hurts the CCP in the long-term. North Korean leader Kim Jong Un would likely edge closer to South Korea and America after denuclearization as it seeks to escape Beijing’s orbit. And should North Korea carry out successful reform and opening up measures, China would likewise be affected. Genuine economic liberalization in China and North Korea could result in a peaceful and controllable transition away from authoritarianism in both communist countries.

What’s next:
1. With both sides agreeing to “framework” to proceed with trade talks and the suspension of tariffs, China and the U.S. should work to pressure North Korea to agree to complete and verifiable denuclearization.

2. Expect more opening up measures and announcements from China. Of course, state media would sell all efforts to liberalize the economy as being part of the CCP’s plan all along, and not concessions made to America.

3. At his May 22 meeting with South Korean president Moon Jae-in, Trump told reporters that he was “not satisfied” with the Washington trade talks and that there remains “a very long way to go.” Expect trade to become a recurring issue between the U.S. and China going forward.