◎ Xi and the CCP can use the Hong Kong national security law for both offensive and defensive purposes.

The Committee’s membership sheds light on how the Chinese Communist Party’s secretive National Security Commission (NSC) apparatus is organized at the provincial government level and its jurisdiction. We believe that the CCP’s national security apparatus under Xi Jinping is a supra-authority organization (超級權力機構) aimed foremost at preserving Party survival against domestic and external “threats.” The new Hong Kong national security law also allows the CCP to impose its draconian national security regime on the world through Hong Kong and further its domination agenda.

Supra-authority organization
Many observers mistakenly believe that CCP leaders can simply snap their fingers and get whatever they want accomplished because theoretically, the “Party leads everything” in the CCP’s Party-state governance system. Reality, however, is more challenging. For instance, a CCP leader has to rely on his State Council premier to coordinate the various state ministries and departments to push through economic policies, and those ministries and departments are ultimately accountable to the premier, not the CCP leader, due to the organization of the Party-state system. In other words, it is possible for a CCP leader to want certain policies but have no control over their implementation due to bureaucratism and factional politics.

National security is traditionally understood to refer to the security and defense of a nation-state. For the CCP, however, “national security” means the security and survival of the Party, its regime, and its ideology. Thus, any individual, group, or country that the Party perceives to be a threat to its survival are fair game for retaliatory measures in the name of “national security.” Meanwhile, language in the Hong Kong national security law such as “secession,” “subversion,” “terrorism” and “collusion with foreign forces” are vaguely defined to facilitate the CCP’s targeting of regime troublemakers under the flimsiest of charges. “Show me the man and I’ll find you the crime,” Beria, Stalin’s security and secret police chief, infamously quipped. With the passage of the Hong Kong national security law (see Article 38 of the legislation), citizens of mainland China, Hong Kong, and even the rest of the world whom the CCP considers to be enemies/“national security threats” are now at risk of being subjected to arbitrary communist regime “justice” as defined by Beria.

Finally, the composition of national security committees in Hong Kong and at Party Central level hint at the membership of national security committees at the provincial level. News reports of a February 2017 CCP Central National Security Commission (CNSC) meeting identify Xi as CNSC chairman and Li Keqiang as vice chair. The meeting was attended by 12 members of the Politburo and its Standing Committee (including Xi), members of the Central Military Commission, as well as the heads of the diplomatic apparatus and the central bank—in other words, the persons-in-charge of Party or state organs that oversee the 11 areas of “national security” covered in the 2015 PRC National Security Law. While the full membership of the CNSC of the 19th Party Congress has not yet been unveiled, its membership likely corresponds with those in the Hong Kong National Security Committee plus positions unique to the PRC, i.e. top officials in charge of key portfolios like economics and finance, public security, foreign affairs, the military, propaganda, etc. (see the table below). The membership of national security committees at the provincial level in mainland China should also correspond to their Hong Kong and Party Central counterparts. With the heads of the key Party and state organs directly answerable to Xi Jinping on “national security” issues via the CNSC and provincial-level (including Hong Kong) committees reporting directly to the CNSC, it is clear that Xi has succeed in turning the national security apparatus that was created during his first term in office into a supra-authority organization. 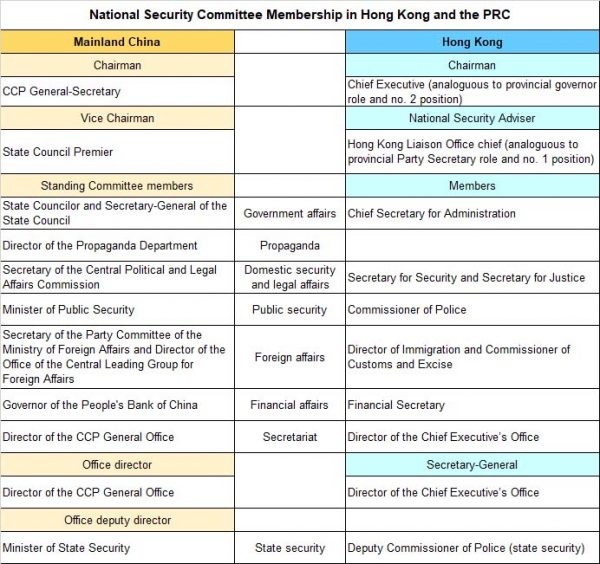 What’s next
1. The CCP factional struggle and political survival-domination drove Xi Jinping to establish the CNSC and consolidate control over the Jiang Zemin faction-controlled domestic security apparatus and intelligence apparatus during his first years in office. Now, the escalation of the factional struggle and the Sino-U.S. “new cold war” appear to have convinced Xi to “upgrade” the national security apparatus into a supra-authority organization and approve of national security legislation that imposes extraterritorial jurisdiction over the world so that he can better deal with the two major crises threatening his leadership.

2. A supra-authority national security apparatus, however, is a double-edged sword for Xi Jinping in the CCP factional struggle. On the one hand, Xi will unlikely be forced into ordering a Tiananmen-like suppression in Hong Kong that his factional rivals can leverage against him because the national security law has thus far proven highly effective in silencing the Hong Kong people and making it difficult for them to protest. On the flipside, Xi’s rivals can take advantage of the national security legislation and Party orthodoxy to undermine his leadership on the Falun Gong issue in Hong Kong and other sensitive human rights matters. Already, Falun Gong practitioners have been attacked and menaced by the triad elements and the Hong Kong police within a week after the national security law was passed; a Hong Kong police officer even threatened to send a Falun Gong adherent to mainland China to have her “organs harvested alive.”

Previous CCP supra-authority organizations did not survive factional struggles. The Cultural Revolution Group was dissolved in 1969 and its key members were purged. Meanwhile, the “610 Office” was criticized by the Central Commission for Discipline Inspection for showing “a disparity in comprehensively studying and implementing the spirit of the rule of law” and a lack of “political sensitivity” in 2016 and was formally disbanded at the 2018 Two Sessions with the rollout of sweeping Party-state institutional reforms (the persecution of Falun Gong, however, remains on the books). Xi’s national security apparatus may be all-powerful now, but will almost certainly be reconstituted in the event that he is ousted.

3. The Trump administration looks set to punish the CCP for passing the Hong Kong national security law. The administration has already begun ending preferential treatment for Hong Kong and the U.S. State Department has imposed visa restrictions on current and former PRC officials. According to a news report, lower level officials are supporting a proposal to target Hong Kong dollar’s peg to the U.S. dollar, as well as scrapping a U.S.-Hong Kong extradition treaty and cooperation with the Hong Kong police. We believe that the U.S. and other countries must get tough on the PRC in words and actions to force the CCP to think twice before abusing the Hong Kong national security law.

Strong U.S. and international actions against the PRC over Hong Kong will convince Xi Jinping that he is right to impose national security legislation over the territory to deal with a “new cold war.” While the Party will likely rally around Xi for now, things could change very quickly should U.S. and international retaliation prove to be too punishing and Xi is unable to handle the fallout. We believe that escalations in the CCP factional struggle will likely lead to political Black Swans in China and the arrival of a “Berlin Wall” moment for the CCP.