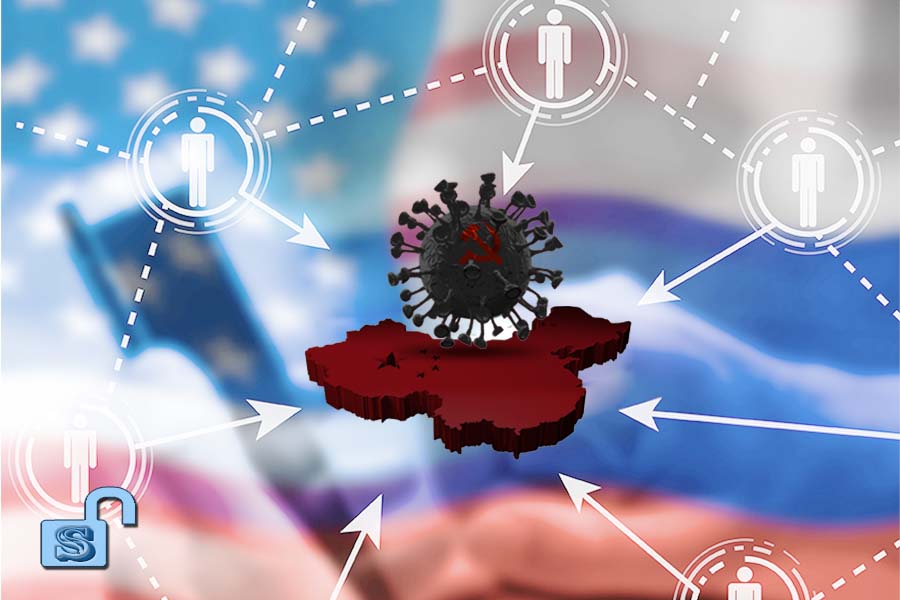 ◎ Ideological confrontation is anathema to today’s CCP because the Marxism-Leninism it enshrines is a bankrupt creed responsible for the killing and oppression of hundreds of millions.

After Lenin and the Bolsheviks seized power in the 1917 Russian Revolution, the Western powers took political, economic, and military measures to establish a cordon sanitaire around Soviet Russia. Communism, the Western democracies recognized, was a dangerous contagion that needed to be contained and stamped out lest the specter of violent revolution threatens the freedom and prosperity of all nations. Nearly three decades later, the American diplomat George F. Kennan advocated “containment”—an offshoot of cordon sanitaire—to check an expansionist Soviet Union in the wake of World War II.

A little over a century later, America’s top diplomat also drew on virus imagery to describe the Chinese Communist Party in a speech about the Party and its threat to the free world. “Perhaps we were naive about China’s virulent strain of communism,” U.S. Secretary of State Mike Pompeo said in his speech at the Richard Nixon Presidential Library. “We have to tell the truth. We can’t treat this incarnation of China as a normal country, just like any other.”

Pompeo warned that “communist China will surely change us” in the absence of efforts by the free world to bring about change in China first. Failure to act means that  “ultimately the CCP will erode our freedoms and subvert the rules-based order that our societies have worked so hard to build … our children’s children may be at the mercy of the Chinese Communist Party, whose actions are the primary challenge today in the free world.”

Pompeo’s concerns are well-founded. Most recently, the CCP’s coverup of the coronavirus outbreak in Wuhan led to a ruinous pandemic that Beijing further attempted to capitalize on in an attempt to advance its domination agenda. At home, the CCP has established a techno-totalitarian regime with sophisticated internet controls, mass surveillance, and a dystopian social credit score system. Cultural genocide is being carried out under the guise of “counterterrorism” in Xinjiang, where more than a million Uyghur Muslims are arbitrarily detained in reeducation camps. The CCP continues to forcibly harvest organs from still-living prisoners of conscience, the bulk of whom are adherents of the Falun Gong spiritual discipline. In the Indo-Pacific region, the CCP has gone back on its prior commitments and militarized the South China Sea, and aims to have a “world class” military by 2050. The CCP’s unfair trade practices and intellectual property theft (which is estimated to cost the U.S. $600 billion annually) is well-documented.

But the threat the CCP poses today differs from that of the Soviet Union in many respects. Strategies that worked for America in the 20th century may no longer be sufficient or appropriate for dealing with a People’s Republic of China far more interconnected with the rest of the world than the USSR ever was.

U.S. Attorney General William Barr observed how major American tech companies have “shown themselves all too willing to collaborate with the CCP,” citing examples of their compliance with the Party’s censorship. Hollywood and the National Basketball Association promote social justice at home but frequently self-censor on China’s human rights issues to appease the CCP. Meanwhile, U.S. corporations helped the CCP build and entrench its techno-totalitarian regime; Cisco took part in the development of the CCP’s “Golden Shield” surveillance and censorship technology that became the so-called “Great Firewall of China.”

“The kind of engagement we have been pursuing has not brought the kind of change inside of China that President Nixon had hoped to induce,” Pompeo said of the expectation that PRC economic reforms, started in the late 1970s, would lead to political liberalization and openness. Instead, China’s deep integration with the global economy and the Communist Party’s ability to translate economic might into political leverage means that the U.S. must think beyond cordon sanitaire as a strategy for the CCP threat. “This isn’t about containment,” said Pompeo. “It’s about a complex new challenge that we’ve never faced before. The USSR was closed off from the free world. Communist China is already within our borders.” Pompeo also recognized that the U.S. strategic approach to the PRC cannot “just be about getting tough.” America “must also engage and empower the Chinese people—a dynamic, freedom-loving people who are completely distinct from the Chinese Communist Party.”

The language used by critics of Secretary Pompeo’s “Communist China and the Free World’s Future” speech has been strikingly uniform. CCP propaganda outlets and PRC diplomats slammed Pompeo for showing “ideological bias” and inciting “ideological hatred” against the CCP. The CCP also insisted that the U.S. attempt to “reverse history” and move away from the engagement policy is “doomed to failure.” Meanwhile, members of the U.S. foreign policy establishment described Pompeo’s speech as a “psychotic” and “extended ideological rant,” and condemned him for committing the U.S. to a “path that is bound to fail.” While domestic complaints about the secretary of state’s rhetoric may largely boil down to partisan disagreement, the near unanimity of the criticism leveled against Pompeo by the Party suggests that the Trump administration is onto something in calling attention to the CCP’s ideology.

Ideological confrontation is anathema to today’s CCP because the Marxism-Leninism it enshrines is, as Pompeo notes, a bankrupt creed responsible for the killing and oppression of hundreds of millions. Laying bare the Party’s nature and history—as well as the abuses it continues to commit in pursuit of its ideology—threatens to shatter the narratives of “national rejuvenation” and “peaceful rise” that the CCP has promoted for decades. As people in the U.S., China, and the rest of the world come to see the Party clearly for what it is, rather than what it claims to be, and as economic downturn weakens Beijing’s social contract with the Chinese people, ideological confrontation will eventually result in an existential crisis of legitimacy for the CCP.

To stave off threats to its legitimacy and deal with U.S. ideological confrontation, the CCP taps into its propaganda apparatus and assets at home and abroad to deploy a range of offensive and defensive counternarratives. On the defensive and domestic front, the CCP sells the strengths of its authoritarian system, denounces the U.S. for showing “ideological bias,” and defends its mandate to rule over China. On the offensive and external front, the CCP accuses the U.S. of “hegemonic thinking,” having a “cold war mentality,” and wrecking the international order. Of late, the CCP has also denounced the Trump administration’s framing of the PRC as an ideological threat as being motivated by cynical political calculations (rather than by serious and genuine concerns of national security).

When the CCP is seriously endangered by U.S. ideological confrontation, it will double down on the “racism” card that it has thus far remained content to play subtly. The CCP has long found it convenient to conflate itself with China and the Chinese people so that it can cast all attempts to hold it accountable for its wrongdoing as “anti-China” rather than “anti-CCP,” or as racism rather than anti-communism or anti-authoritarianism. By claiming to speak for 1.4 billion mainland Chinese as well as overseas Chinese, the CCP holds the mainland Chinese people hostage while appropriating Chinese national identity and cultural heritage. By doing so, the CCP expects that countries and other foreign entities wishing to stay “politically correct” will continue allowing the Party a “free pass” to pursue its malign policies and be less inclined to join the U.S. in any endeavor that could be perceived as an “anti-China alliance.” Meanwhile, as the U.S. struggles with domestic turmoil over race relations, propaganda overtures by the CCP to openly accuse the Trump administration of “racism” have explosive potential. The CCP’s narratives and disinformation about “anti-China” forces will also alienate the Chinese people (including overseas Chinese) from the United States and American values, while drawing them closer to the Communist Party’s worldview, which is predicated on hatred and struggle. The “China challenge,” complex as it already is, will become even more tricky and costly for the U.S. to handle should the CCP level charges of “anti-China” forces and “racism” in earnest.

The Trump administration has been tough, strategic, and effective in dealing with the CCP, particularly on trade, technology, and human rights. The administration, however, has room for improvement when it comes to engaging and empowering the Chinese people, as well as in confronting the CCP at the ideological level. The Trump administration can consider bolstering the “culture” component of its strategic approach to the PRC. Carried out effectively, a “culture strategy” could prove instrumental in neutralizing the CCP’s ideological countermeasures, inoculating the general public against the Party’s malicious propaganda, and rolling back the CCP’s corrupting influence in America and around the world.

The American people, the Chinese people, and the rest of the world need to understand why the U.S. is engaging in ideological confrontation with the CCP. Hence, it falls to the U.S. to educate the general public, with a focus on the CCP, on what Marxist-Leninist regimes are, what they stand for, their political culture, as well as their atrocious human rights record and bloody heritage; the major China policy speeches by senior Trump administration officials are a good start. The U.S. would also do well to inform the general public that while Marxism-Leninism may have little currency as a political and economic creed, the CCP remains a distinct ideological threat via its subtle and pervasive promotion of Communist Party culture—individuals, organizations, and even countries that have extensive and long-term dealings with the CCP end up internalizing aspects of its culture, such as struggle, deception, corruption, censorship, and authoritarianism. Further, the U.S. needs to provide education on CCP propaganda and disinformation narratives, strategies, and tactics so that the general public can inoculate themselves against the Party’s influence campaigns. Finally, the U.S. needs to reacquaint the general public with what America stands for, including her founding principles and values, to serve as a contrast to the CCP. In this regard, Secretary Pompeo’s Commission on Unalienable Rights initiative is a step in the right direction.

To win over the Chinese people, the U.S. may consider showing appreciation for authentic Chinese culture and heritage. Chinese culture, as preserved in Taiwan and Hong Kong, is based on a rich heritage of moral thought, and is compatible with freedom, democracy, and the rule of law. The U.S. can use “creative and assertive ways” to remind the Chinese people they have, in Secretary Pompeo’s words, an “awe-inspiring civilization that has endured for thousands of years” that is completely distinct from the CCP and its malign Party culture, which is the product of discredited Marxist theory and decades of brutal practice. By expressing an appreciation for authentic Chinese culture and contrasting it with Party culture, the Trump administration can debunk the CCP’s skewed “century of humiliation” historical narratives and win the trust of the Chinese people, with grave consequences for the Communist Party.

The Trump administration’s emerging ideological confrontation with the CCP, far from being misguided or ineffective, strikes the CCP in its Achilles’ Heel. As ideological confrontation threatens a crisis of legitimacy for the CCP, it will fight back stubbornly against further developments that undermine the Party’s justifications for unchallenged rule over China. In the likely scenario that the CCP escalates the propaganda war with all-out accusations of “anti-China” racism against the U.S., the Trump administration can counter this ploy with a “culture strategy” of its own—emphasizing the distinction between the CCP and the Chinese nation, showing approval for authentic Chinese culture, and helping empower mainland and overseas Chinese to reclaim their identity from the Communist Party. Meanwhile, the U.S. should stay the course in its overall strategic approach to China, counter other propaganda offensives by the CCP, and inoculate America and the world against the corrupting influence of the Communist Party and its political culture while minimizing costs and avoiding unnecessary risks in the “new cold war.”