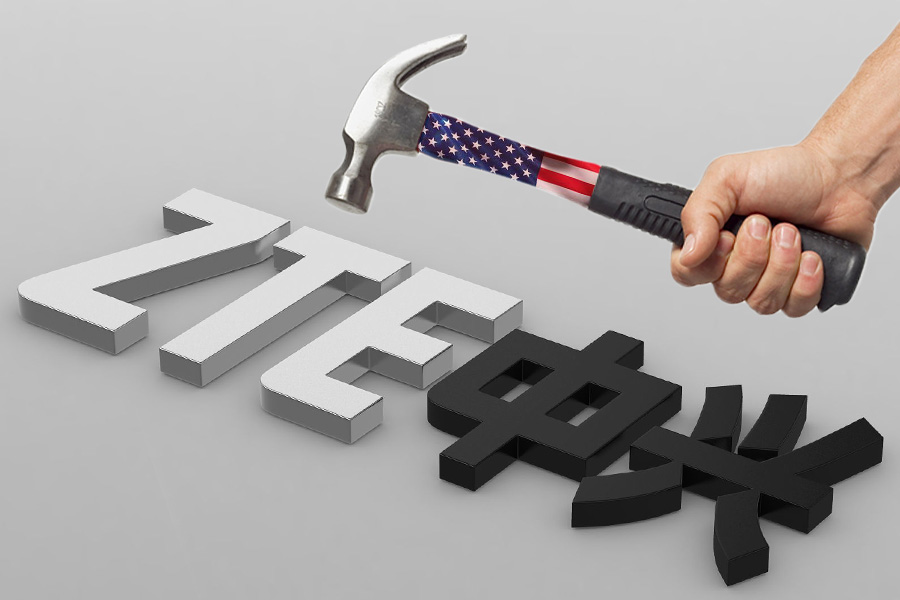 ◎ American action against ZTE and Huawei is in line with Trump’s National Security Strategy.

On April 16, the United States Department of Commerce banned American companies from selling services, software, or components to ZTE Corp, a state-supported Chinese telecommunications manufacturer, for seven years (until 2025, March 13).

The ban was imposed because ZTE broke an agreement reached with the U.S. government after it was caught illegally shipping U.S. goods and technology to Iran and North Korea. The Commerce Department noted that ZTE lied to the U.S. government about taking action against the 39 employees involved in the violations. Instead of punishing all the employees, ZTE had only fired four and gave the others full bonuses without disciplining them.

ZTE has already paid $890 million in fines and penalties. The U.S. government could impose an additional $300 million.

On April 17, ZTE suspended trading of its shares in the Hong Kong and Shanghai stock exchanges. Shares of companies in business with ZTE plunged that day.

The backdrop:
1. Huawei chairman Eric Xu said at a tech event in Shenzhen on April 17 that while 5G was faster and more reliable, consumers would experience no “material difference between the two technologies,” according to a Financial Times report on April 18. Xu’s remarks represent a departure of sorts from the state rhetoric of how the swift advancements in China’s 5G would see it overtake America and lead the world.

3. On April 17, the Federal Communications Commission voted in favor of blocking federal funds from being spent with companies that are considered a national security risk, such as Huawei and ZTE.

4. The U.S. trade representative office is considering a complaint under Section 301 of the Trade Act of 1974 against China’s restrictions of U.S. cloud computing providers and other high-tech services, according to The Wall Street Journal. Chinese companies like Alibaba could be hit if the U.S. moves for reciprocity.

5. On April 16, the United Kingdom’s National Cyber Security Centre warned UK telecoms providers that ZTE equipment and services could pose a national security risk. In February, the Australian Department of Defence confirmed that it is phasing out ZTE equipment and has stopped using Huawei phones.

Our take:
1. American action against ZTE and Huawei is in line with Trump’s National Security Strategy. Per our earlier analysis, the “Made in China 2025” strategy is part of the Chinese Communist Party’s (CCP) plan for economic expansion. The CCP is also pushing its 5G development and growing its high-tech industry (AI, Big Data, etc.) as it seeks new battlegrounds to best the U.S.

2. In our 2017 China semiconductor development report, we noted that China’s semiconductor industry vulnerabilities include lack of high-end semiconductor technology and talent; official corruption and immorality; and technology theft. The recent sanctioning of ZTE, China’s second largest telecom equipment maker and the world’s fourth largest, corroborates our analysis. ZTE is now on the brink of a disaster.

3. The ZTE ban exposes a major weakness in China’s tech sector—a deep dependence on the U.S. Because ZTE is reliant on American microchips and software (Android), it may have to redesign up to 90 percent of its product line, according to The New York Times.

4. The ZTE case has debunked CCP propaganda regarding the strength of China’s tech industry, and forced the propagandists to eat humble pie. Three days after the ZTE ban, the Propaganda Department’s sudden stopped promoting “Amazing China” (li hai, wo de guo, or literally, “My Country is Awesome”) a documentary film about China’s “glorious achievements” in tech over the last five years. The documentary also appeared to be censored, and is no longer available in cinemas or on video platforms in China.

5. Ironically, boisterous CCP propaganda about its tech primacy has alarmed the international community and put many nations on the defensive. Yet the CCP rhetoric was born out of necessity. As China’s economic and social problems pile up, the CCP can only turn to shallow nationalism to distract and deceive the Chinese people and safeguard its ruling legitimacy.

6. The CCP has perhaps grossly underestimated President Donald Trump’s resolve on matters of national security. When Trump ramps up the pressure and when American society at large is more aware of the threat the CCP poses to the U.S., the CCP’s past schemes would become ineffective.

7. We believe that the CCP will open up China’s markets further and provide more protection to intellectual property to stall for as long as possible stronger U.S. trade action. Also, Xi Jinping would likely push Kim Jong Un to accelerate the denuclearization of North Korea to secure a bargaining chip for use in Sino-U.S. trade talks.

Looking ahead:
Huawei, Alibaba, and Hikvision could be targeted next as America focuses on tackling national security risks.