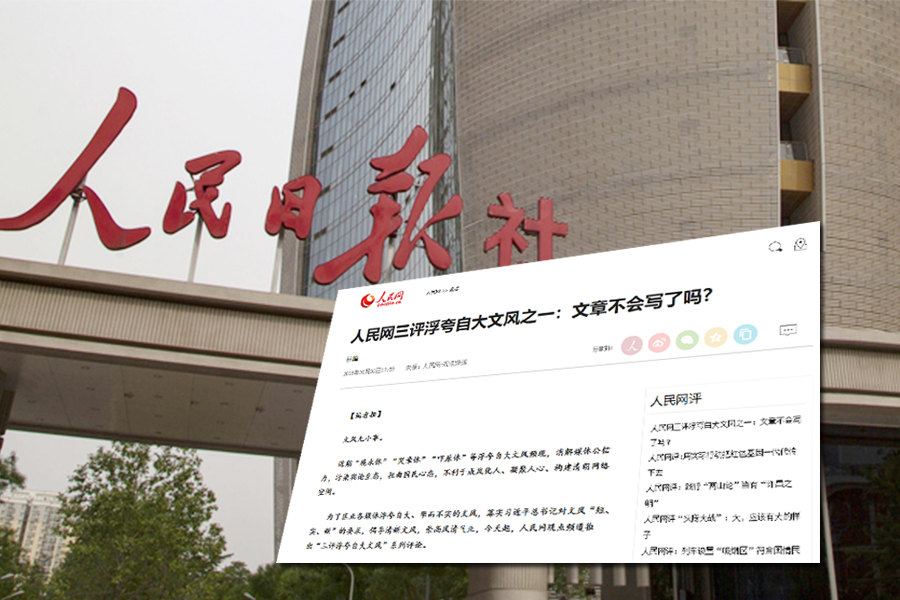 ◎ The CCP is adjusting its propaganda to lay the foundation for subsequent trade negotiations with America.

On July 2, Chinese Communist Party (CCP) mouthpiece People’s Daily published on its website the first article in a series aimed at critiquing “pompous, arrogant writing” and promoting Xi Jinping’s requirements for writing. Titled “Have We Forgotten How to Write Essays?”, the commentary piece criticizes articles that exaggerate China’s achievements and mock other countries.

The commentary took aim at the recent popularity of clickbait headlines such as “America is afraid…”, “Japan is terrified…”, and “Europe regrets…”, and described the trend and writing quality as “worrisome.”

The commentary also slammed articles that make “exaggerations and generalizations” (“China is Number One in These Areas! Nobody Challenges This”), “enthusiastically promote” ideas that are “ridiculous” (“Never Fear, Chinese Science and Tech Surpasses America, Reportedly the World’s Best”), and engage in “wishful thinking” by taking praises about China by foreigners at “face value” and “magnifying” the message (“China Takes the World’s Center Stage,” “China’s Economy is Now the World’s Leading Economy”).

The commentary adds that the articles it is criticizing “lack factual ‘skeleton,’ lack content ‘flesh,’ and lack thoughtful substance,” and have bred “arrogance” and “mistaken, egotistical self-aggrandizement” in the populace.

The backdrop:
The People’s Daily commentary series on writing style follows what seems to be an attempt by Beijing to downplay China’s programs or “achievements” in science and technology in the wake of escalating Sino-U.S. trade tensions.

After President Donald Trump announced plans to impose up to $450 billion worth of tariffs on Chinese goods (including $16 billion that specifically targets “Made in China 2025” goods”) on June 15 and June 18, several news outlets started reporting that China was softening its “Made in China 2025” propaganda messaging. For instance, CCP mouthpiece Xinhua mentioned “Made in China 2025” over 140 times between January to May 2018, but virtually stopped mentioning the tech manufacturing program since June 5.

On June 23, Liu Yadong, the editor-in-chief of the Ministry of Science and Technology’s official newspaper, said at a forum that it is “common knowledge” that China’s science and technology is very much behind America and other developed Western countries, but the real problem was that “some people” kept hyping up China’s “four great new inventions” or claim that China had overtaken the United States as world number one. These people, Liu said, were “deceiving the leadership, the public, and themselves,” and their arguments have “become a problem.”

On June 26, the nationalistic newspaper Global Times, a leading purveyor of the CCP’s boastings, carried an article exposing research fraud by Shandong Changlin Machinery Group. Titled “Investigating and Punishing Tech Fraud is a Must,” the article, written by a Beijing Jiaotong University professor, noted that Shandong Changlin had made 1.5 billion yuan over eight years by passing off research on hydraulic pumps by Japanese company Kawasaki as its own. The misappropriated research had supposedly passed the Chinese government’s appraisals.

On June 28, Zhao Jinping, the head of the Foreign Economic Research Department of the Development Research Center of China’s State Council, said at a forum organized by the government that China should “rationally refute” statements such as “China’s strength vastly exceeds the United States” or “China is number one in the world.” He also encouraged China to discard “dangerous thinking” and have an “objective grasp of reality.”

The big picture:
The “on again, off again, on again” nature of the Sino-U.S. trade dispute has left the CCP propaganda apparatus scrambling to repackage its official propaganda line and struggling to corral the national sentiment.

Our take:
1. Based on our observation, the CCP is adjusting its propaganda to lay the foundation for subsequent trade negotiations with the U.S.

Before and during the Sino-U.S. trade talks, the CCP ratcheted up its “tough guy” image very likely because it misread President Donald Trump’s intentions on trade. The CCP’s “fight to the finish” rhetoric and willingness to purchase more American goods make sense if it had presumed that Trump only wanted trade reciprocity but would not resort to levying tariffs.

After three rounds of talks, the CCP seemed to have realized that the Trump administration was never going to be satisfied by increased purchase deals and really wanted it to make structural changes to the Chinese economy. Meanwhile, the CCP’s bombastic propaganda was increasingly being mocked by the Chinese people with one trade setback after the other.

A glance at the headline of People’s Daily commentaries since Trump signed a memorandum on tariffs on March 22 is shows how the CCP lost control of its narrative:

March 23: “China Resolutely Defends its Legal Rights and Interests”
March 24: “In a Trade War, China Will Fight to the Finish”
March 30: “We hope that America Doesn’t Want to ‘Go it Alone’”
April 4: “China Has the Confidence to Win this Trade War!”
April 5: “America is Wildly Brandishing a Big Stick; China Will Fight to the Finish”
April 5: “To Prevent Losses, America’s Only Way is to Rein in the Horse at the Edge of the Cliff”
April 6: “The White House Wants to Play Bigger? Bring it On!”
April 6: “Resolve and Vigor is Hurting America”
April 6: “Who is Frightened by $100 Billion? Not China”
April 7: “America’s Trade War Reveals its Hegemonic Characteristics”
April 7: “Don’t Play with Fire, America, or the Consequences are Severe”
April 7: “Attack Precisely America’s Vital Interests”
April 9: “The Trade Protectionist Tiger Cannot Take a Hit”
April 12: “Let the Challenger Lose His Shirt”
May 5: “Let Mutual Benefits and Win-win Undo the Sino-U.S. Trade ‘Rancor’”
May 19: “Expanding Imports is Conducive to the People’s Livelihood and Well-being”
May 20: “China’s Energy Sector Continuously Opens Up to Foreigners”
May 21: “Sino-U.S. Economic and Trade Consultations Result in Win-win Choice”
May 21: “China and America Reach a Consensus, Won’t Fight Trade War”
May 22: “Experts and Scholars Say Expansion of Agricultural Imports Enrich the People’s Tables and Provide Them With More Choices”
July 2: “People’s Daily Online Three-part Series on Pompous, Arrogant Writing: Have We Forgotten How to Write Essays?”
July 3: “People’s Daily Online Three-part Series on Pompous, Arrogant Writing: Are the Chinese People Not Self-confident?”

2. China’s stock market and currency exchange rate have plummeted in the lead up to the imposition of tariffs by both countries on July 6. Meanwhile, China’s debt crisis appears to have been triggered, and local governments have started defaulting on loans. China cannot withstand a trade war with the U.S. under present circumstances, and Beijing would likely seek further negotiations with Washington to avoid a full-blown trade conflict.

In the meantime, the CCP appears to be defusing tensions by tuning down its over-the-top propaganda and finding “scapegoats” to blame for its past rhetoric. The latter move is almost certainly aimed at explaining away the CCP’s earlier aggressive propaganda to the Chinese people and America.

3. The CCP has long relied on propaganda and deception to maintain its power and grip over the Chinese regime. And CCP leaders craft political thoughts or seek to popularize certain concepts to stamp their authority over the country and the Party.

To establish his authority in the Party while consolidating power, Xi Jinping shifted the regime away from Deng Xiaoping’s “hide your strength, bide your time” strategy to the “strong country” strategy. Thus, Xi promoted slogans like the “China Dream,” “Strong Military,” and “Great Power Diplomacy” while seeking to grow the economy and expand China’s military presence abroad. Whether Xi actually believes the rhetoric is secondary to him sending the message that he is his own man and is forging a different path from previous leaders. Indeed, the importance of propaganda in the Chinese regime means that image building is vital for Party leaders seeking to buttress their authority.

Xi’s propaganda strategy, however, is a double-edged sword. While the strategy helps to consolidate his authority in the Party and the regime, it also leaves him vulnerable to pushback when the propaganda is exposed as hot air. For instance, Chinese people are discovering that China cannot actually “fight to the finish” in a trade war with America, while the U.S. is encouraged to go on the offensive to safeguard its national security in response to a China that is openly proclaiming its ambition to be a great power.

4. The CCP has long relied on its military and propaganda, the “gun” and the “pen,” to stay in power. After the Cultural Revolution bankrupted the communist ideology, the CCP based its political legitimacy on the “purse,” or economic development and prosperity.

Now the CCP’s “purse” is shrinking as China’s economy worsens, and it cannot casually mobilize the “gun” to deal with the social problems that are bound to arise (and are occurring) in a severe economic downturn. With the “pen” losing control over the narrative and in damage control mode, the CCP is struggling to maintain its political legitimacy.

The political risk of the CCP leadership is greatly elevated at present. CCP rule is also headed into endangered territory.