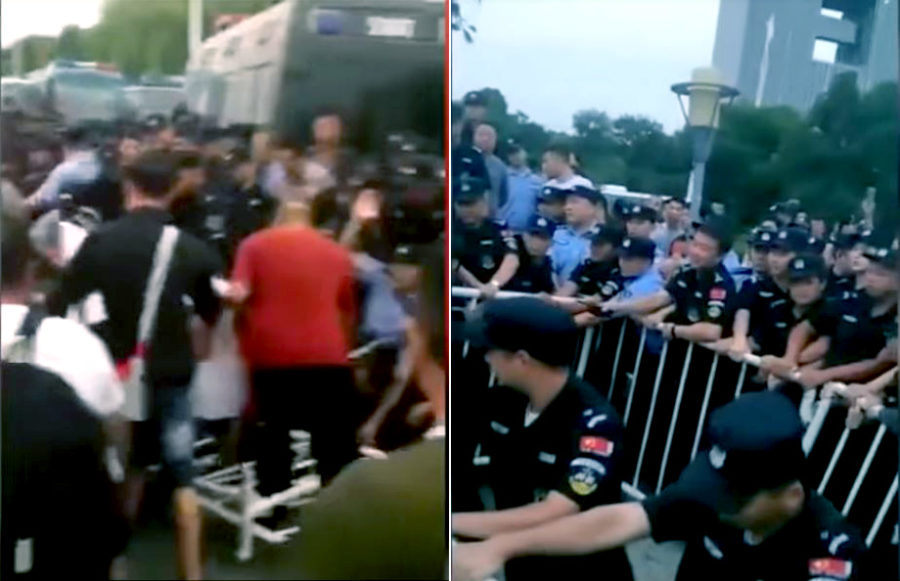 ◎ The rights and welfare of PLA veterans are often disregarded.

On June 19, over a thousand Chinese military veterans from across the country launched a protest in front of government buildings in Zhenjiang City, Jiangsu Province.

As the protests dragged on, the Chinese authorities went on high-alert and used violent measures to disperse the veterans. At the time of writing, the veterans appear to have scattered.

The Zhenjiang military veterans’ protest, aside from being a social issue, is another symptom of the Chinese regime’s financial woes.

The backdrop:
June 19: Over a thousand People’s Liberation Army (PLA) veterans from more than a dozen provinces (Sichuan, Hunan, Shandong, Liaoning, Jiangxi, Guangdong, etc.) gathered at the square in front of the Zhenjiang Municipal Government building in Jiangsu Province to protest the local government.

The veterans demanded justice for their fellows who were beaten up and wounded by triad members linked with local governments.

The veterans chanted slogans calling for the purge of corrupt officials and to severely punish corruption; an end to oppression; blessings for the Zhenjiang people; and their willingness to perish together with the local government (tong gui yu jin) if they are taken out. According to some reports, the veterans also chanted their support for Chinese leader Xi Jinping and to “believe in the Chinese Communist Party,” possibly as a means of self-preservation.

The Zhenjiang authorities would use a carrot-and-stick approach to dealing with the veterans. Early on, several provincial and city officials arrived on scene to persuade the veterans to leave to no avail. The local authorities also tried intercepting the veterans before they could make it to the square where the protest was held. 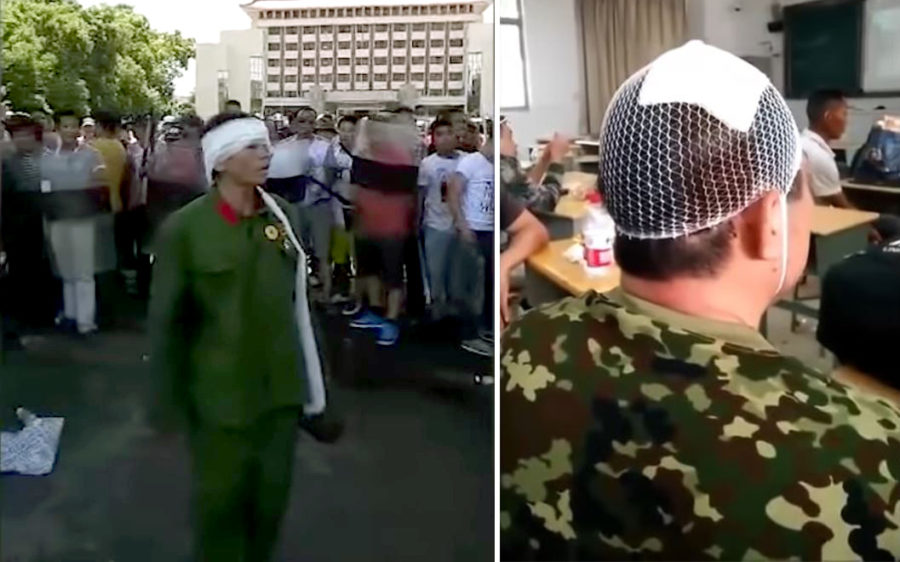 June 23: According to overseas Chinese language media reports, thousands of police and riot police surrounded the veterans at about 3:10 a.m. The public lights in the square in front of the government building were turned off, and the police proceeded to beat up the protestors brutally. Some of the veterans were driven away, and others were illegally detained in various school buildings.

Veterans told Radio Free Asia that over 9,000 police were unleashed on about 2,000 to 3,000 sleeping veterans and their relatives. They estimate that about 200 were injured.

Other reports say that two army brigades were mobilized, and armored vehicles were deployed outside Zhenjiang awaiting orders. The reports also say that the June 23 crackdown resulted in at least three deaths and 15 cases of coma. The police have forbidden visitors to the hospital, and mainland media has been barred from reporting on the incident.

By the morning of June 23, only litter was left behind in the government square. By the afternoon, however, veterans from other areas had started streaming into Zhenjiang.

June 24: The Zhenjiang authorities imposed a sort of martial law in the city. All trains were stopped from passing through Zhenjiang, and vehicles were only allowed to depart, and not enter, Zhenjiang on all highways. Military veterans from other regions got around the “travel ban” by entering the city on foot.

Veterans who fought in the 1979 war with Vietnam reportedly yelled: “We weren’t afraid of death in war! We have resolution and confidence! We will oust those who used violence to clear out the square!”

Meanwhile, a document supposedly by the Ministry of State Security (MSS) was being circulated in various WeChat groups. The document ordered the first two departments in the MSS’s Second Bureau to go to Zhenjiang and investigate the human rights allegations raised by the veterans.

June 25: According to various reports, military veterans from other regions were being held in their hotels and forbidden from leaving the premises for meals. More news of crackdowns and bloodshed as veterans and the authorities clash continue to surface.

The big picture:
Since 2016, large numbers of military veterans across China have made trips to Beijing to petition the government on issues ranging from lack of benefits, poor post-military job prospects, and various mistreatments. For example, tens of thousands of veterans surrounded the headquarters of the Central Military Commission, the Central Committee for Discipline Inspection, and other government buildings to demand fair treatment on Oct. 11, 2016.

The Xi Jinping administration has paid attention to military veterans’ petitions. At the Two Sessions this March, the State Council created a new department to handle veteran affairs. At the plenary meeting of the PLA and the People’s Armed Police on March 12, Xi talked about establishing a system to provide social safeguards for veterans, and said that “heroes shouldn’t be left to shed blood and tears.” Since the new veteran affairs department was set up, large numbers of veterans have shown up daily with their petitions and demands. Observers have spotted local government interceptors and cars with license plates from out of town near the veteran affairs department building.

The Zhenjiang veterans’ protest also comes at a time when China’s economy is worsening and the country is on the brink of a full-blown trade war with the United States. A White House statement on June 18 leaves China facing a potential $450 billion worth of U.S. tariffs. China’s stock markets plummeted after the Trump administration announced the planned tariffs; the Shanghai Composite Index fell by 2844.51 points (nearly 6 percent drop) between June 19 to June 26, and the renminbi exchange rate dropped to the 6.58 level.

China’s financial situation has led to other social problems. In early June, civil servants in Hunan’s Leiyang City held a protest to demand their wages for May, while the staff of Qiqihar Television, a local state media outlet, carried banners asking for their salaries in a protest outside the television station.

Our take:
1. There are about 57 million retired military personnel in China, according to state media. This figure is rising at a rate of several hundred thousand annually. However, the rights and welfare of PLA veterans are often disregarded. There is a long history of veterans taking to the streets to protest for their rights, and the scale of such protests has increased in recent years. The recent spike is closely linked with the tightening financial situation in China.

Central and local government financial affairs are not always synonymous. For instance, while the central government has policies on the handling of veteran affairs, these policies may not be carried out by local governments with limited budgets. Because veteran affairs is low in the list of benchmarks that determine the promotion of officials, the military veterans are the first to be ignored in times of financial difficulty.

Put another way, the welfare of military veterans have been ignored not just because of the nature of CCP authoritarian rule, but also because local governments are facing serious financial woes. In an article we wrote in May, we noted that Zhejiang was the only province out of China’s 31 provinces to make a fiscal surplus between 2012 to 2017, while Guangdong province saw a small surplus in 2017.

2. Being unable to finance veterans’ welfare should technically not be a problem for the CCP—if it was less focused on funding its expansionism. For instance, the CCP hands out billions in loans to many third world countries and sponsors generous scholarships for overseas students. The CCP also spends billions on united front and propaganda work each year, including financing united front work in Taiwan and preferential treatment to Taiwanese working on the mainland, as well as providing free medical services to children in Afghanistan. On the flipside, Chinese citizens have problems financing their schooling, finding a job, and visiting a doctor. Chinese who are aware of the CCP’s largesse abroad feel a sense of injustice when they draw comparisons with the domestic situation.

3. Xi Jinping’s sweeping 2015 military reforms have greatly impacted many interest groups in the PLA and political sphere. Backlash against Xi’s reforms is almost a certainty; we have observed the hand of the Jiang Zemin faction behind some of the veteran protests. Indeed, the protests and other social problems could escalate as Xi administration’s failure to defuse Sino-U.S. trade tensions creates an opening for the CCP factional struggle to ratchet up.

CCP political culture demands that it never admit to mistakes. And it is customary of the CCP to crackdown on human rights issues. As internal and external problems pile up for Xi Jinping, he would be forced to make fundamental (and even radical) institutional changes in China.