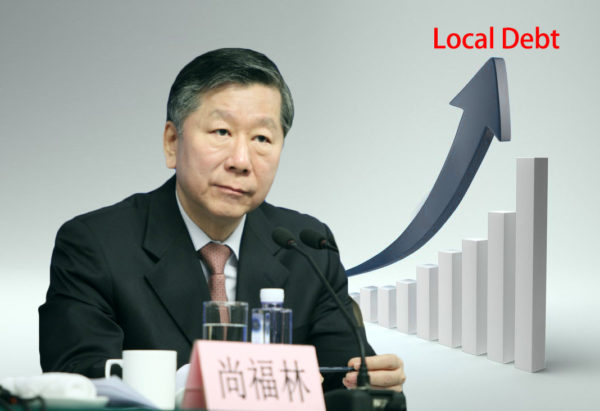 ◎ Shang Fulin said that more attention should be paid to local government debt, particularly the debt of administrations below the provincial level.

Shang Fulin, the former China Banking Regulatory Commission director, said that more attention should be paid to local government debt, particularly the debt of administrations below the provincial level.

He added that he had previously learned from city-level secretaries and mayors that he investigated that their regions were not ideal for investment and that returns were hard to come by in the short term. When new officials took over those regions, they were shocked to learn the financial situation that their predecessors had left them with. Shang said: “Those city-level leaders said that stalls have already been set up and the money is spent, but investments still have to be brought in. What is to be done?”

Shang made his remarks during a Chinese People’s Political Consultative Conference (CPPCC) regional group meeting at the Two Sessions on March 7.

The backdrop:
1. In recent months, a number of provincial and city governments issued notices regarding local debt liquidation inspection work.

For instance, a small town in Hulunbuir, a prefecture-level city in Inner Mongolia, was found to be 300 million yuan (about $47.8 million) in debt as of end 2017. However, the town had also accrued through non-government agency financing an implicit debt of 1.5 billion yuan, or an amount five times of its official debt.

A county in Ningxia Province had a debt of 696 million yuan as of end 2017, according to official data. But take the county’s implicit debt into account and its total liabilities rose to 2.828 billion yuan, a debt ratio that at once shifts its financial status from healthy to dangerous.

Why it matters:
China’s local government debt risk is very high, and Beijing is still trying to fully grasp the whole situation.

Our take:
1. Shang Fulin’s disclosure at the Two Sessions indirectly affirms our gloomy outlook on China’s economy in 2018. While the 2017 GDP figure reflects healthy economic growth, there is a sense that crisis could be just around the corner.

In January, some provincial governments confessed to fabricating GDP figures in previous years, while 21 provinces revised their GDP projection for the year downwards. These are not good omens.

2. The Xi Jinping administration’s deleveraging campaign and stringent financial regulation are aimed at removing risks and avoiding a debt crisis. To better manage risks in China, companies with businesses on the mainland need to be able to read the political tea leaves and extract valuable information from open source government documents.