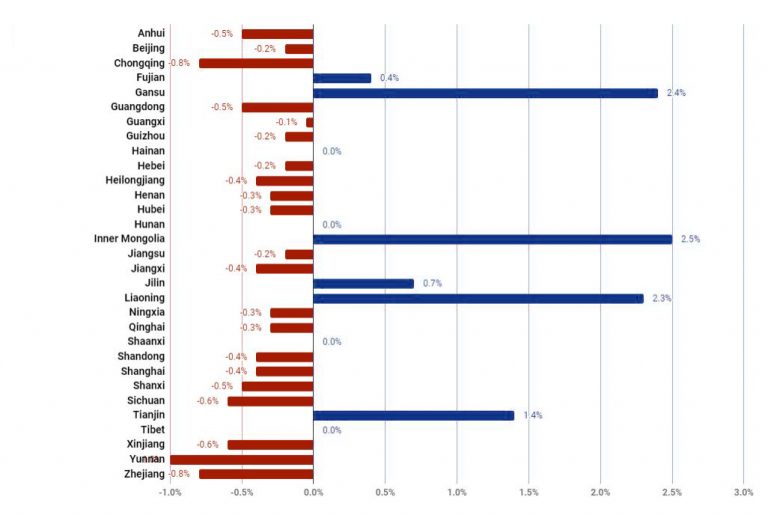 ◎ Twenty-one provinces are projecting lower growth as compared to their real GDP growth for 2017.

Chinese provincial governments have recently released their revenue targets for the year.

Twenty-one provinces are projecting lower growth as compared to their real GDP growth for 2017:

In particular, Yunnan projected a 2018 growth figure that is 1 percent lower than its actual 2017 GDP. Other provinces anticipating much lower growth this year include Chongqing and Zhejiang (both 0.8 percent lower).

Another four provinces are targeting similar revenue figures as the previous year:

In particular, Hainan removed targets for fixed-assets investment, industrial production, and GDP for some of its cities and towns.

In June 2017, the Central Leading Group for Comprehensively Deepening Reforms approved of a plan for the National Bureau of Statistics (NBS) to unify GDP calculation. The plan, which will be officially implemented in 2019, will see the NBS working with regional statistics bureaus to calculate regional and national economic data. Previously, regional governments and the central authorities compiled their data separately, resulting in sharp differences between the national GDP and the combined GDP of China’s provinces. The unified GDP calculation plan could further expose the problem of data fabrication in the provinces.

In July 2017, the twelfth central inspection group reported and criticized the governments of Inner Mongolia and Jilin of “falsifying economic data.”

In December 2017, the NBS revealed in a report that 10 towns and counties in Yunnan, Hunan, Jilin, and Chongqing had inflated their annual fiscal revenue by 1.549 billion yuan (about $245 million).

1. In 2017, 21 provinces cut their growth targets for the year as compared to their real GDP growth in 2016. This year, 17 of the 21 provinces that projected lower growth have been doing so for consecutive years. Among the regions that have cut growth estimates for two years include key economic contributors like Beijing, Shanghai, Guangdong, Jiangsu, and Zhejiang. This development suggests that local governments are not optimistic about the state of the Chinese economy.

2. The phenomenon of provinces lowering their 2018 growth targets lends further credence to our Jan. 14 analysis of why local governments are confessing to having fabricated GDP figures. Despite Inner Mongolia and Tianjin reporting that their 2016 GDP numbers were inflated by about 30 to 40 percent, a National Bureau of Statistics spokesperson insisted that the numbers fraud didn’t affect the official 2017 GDP growth figure of 6.9 percent.

3. We believe that regional governments are owning up to having falsified data and are now lowering their growth targets because they can no longer cover up the severe economic decline.

For instance, Shandong, the province with the third-highest GDP in 2017, issued an additional 97.8 billion yuan of government bonds that year. The Shandong government also secured 53.969 billion yuan in subsidies from the central government to cover up its fiscal gap.

4. The Chinese Communist Party, when faced with increasing danger, tends to repackage its danger as “opportunity” and pass the risk on to other parties. From this perspective, the CCP’s pledge at the 2018 Davos economic conference to open up China’s economy further to foreign investors is a sign that the economy is, in fact, not doing well.