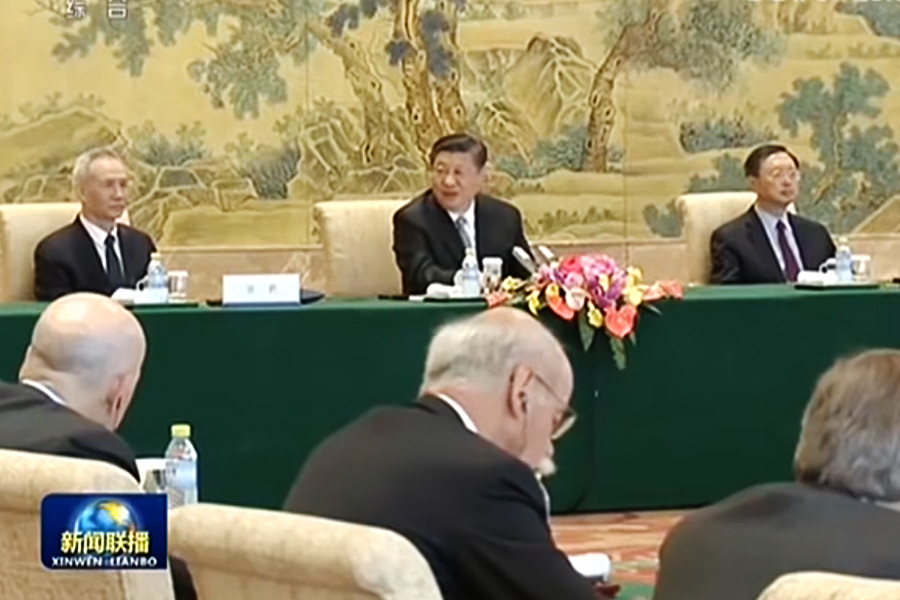 Geopolitics Watch: Will Xi Really Strike Back at the US in Trade Clash?

◎ Xi is posturing for the moment, but future action depends on U.S. action.

In a meeting with about 20 American and European CEOs of multinationals on June 21, Chinese leader Xi Jinping appeared to indicate that China would retaliate to the Trump administration’s recent escalation of trade tensions, according to The Wall Street Journal.

“In the West you have the notion that if somebody hits you on the left cheek, you turn the other cheek. In our culture we punch back,” Xi said, according to the report.

The Journal also cited a senior Chinese official as saying: “China is not going to yield to outside pressure and eat the bitter fruit. That’s the negotiation principle set by President Xi.”

“This latest action by China clearly indicates its determination to keep the United States at a permanent and unfair disadvantage,” President Donald Trump said in a statement on June 18. “This is unacceptable. Further action must be taken to encourage China to change its unfair practices, open its market to United States goods, and accept a more balanced trade relationship with the United States.”

From May to early June, U.S. and Chinese officials held several rounds of talks to resolve the trade dispute after the Trump administration first announced tariffs in April. The U.S. tariffs are aimed at cutting its massive trade deficit with China, getting China to change its unfair methods of acquiring American intellectual property and technology, and protecting national security. Concurrently, the Trump administration is pursuing initiatives to curb the Chinese regime’s “Made in China 2025” plan to become a global technology leader.

Our take:
1. China and the U.S. would likely seek opportunities for last-ditch negotiations before the first round of U.S. tariffs are levied on July 6.

According to Bloomberg, officials at the U.S. National Economic Council are reaching out to China experts and former U.S. government officials to weigh the chances for bilateral talks in the next fortnight, and are even considering inviting Chinese vice president Wang Qishan to negotiate.

We previously wrote that China would not be able to withstand a trade war with the U.S. A worsening economy and rising social tensions in China in recent weeks have made delaying a full-blown trade clash more imperative for the Xi Jinping administration. It is unlikely that China is not finding ways to restart trade talks before the tariffs deadline. And should both sides get a chance to talk, Xi needs bargaining chips to negotiate a favorable deal.

In this context, Xi’s talk of wanting to “punch back” against the U.S. and the unyielding attitude from the senior Chinese official are attempts at tough posturing before further trade discussions.

2. Regardless of whether Xi actually plans to “punch back,” he and other Chinese officials have to publicly present a hard-nosed attitude as per the political culture of the Chinese Communist Party (CCP). Propaganda is a crucial means for the CCP and other communist regimes to ensure regime survival. Authoritarians can never openly admit defeat even if defeat is a reality, and regime propaganda would say anything to spin defeat into victory to save face.

The North Korean regime is a case in point. Weeks before the June 12 summit between North Korean leader Kim Jong Un and President Donald Trump, North Korean officials and state media condemned U.S-South Korean military drills and remarks by U.S. National Security Advisor John Bolton using classic North Korean propaganda rhetoric. Yet it was clear (at least to us) that Kim was sincere about denuclearizing as early as March. In his first meeting with Xi Jinping in March, Kim said that he is committed to the denuclearization of the Korean Peninsula according to the “wishes of General Secretary Kim Jong Il,” his late father, according to Xinhua. In April, Kim announced that North Korea would cease nuclear and missile testing and instead focus on economic development. And in the lead up to Kim’s meeting with Trump in Singapore, the North Korean regime removed all its anti-American propaganda posters in Pyongyang and ceased selling anti-American trinkets in tourists shops. State media also ceased direct criticisms of Trump after he agreed to a summit with Kim in March. In Singapore, Kim and Trump signed a joint declaration where the former “reaffirmed his firm and unwavering commitment to complete denuclearization.” Despite having made concessions, Pyongyang never once publicly conceded that U.S. “maximum pressure” had brought it to the negotiating table where it basically agreed to surrender its nukes and shutting down its nuclear program.

A similar situation is happening with the Chinese regime. For all of the CCP’s macho rhetoric on trade, it appears to be quietly reining in its anti-American propaganda for fear of escalating the trade conflict. According to recent information from mainland China, state media organs have been instructed to stop mentioning the “Made in China 2025” plan, refrain from attacking Trump, and not carry reporting that would ratchet up trade tensions. Reuters also reported on June 25 that Beijing is “downplaying Made in China 2025” because it is “increasingly mindful that its rollout of the ambitious plan has triggered U.S. backlash.” Meanwhile, the Chinese State Council has been announcing plans for economic opening up, and Hainan Province even announced that it would allow tourists to circumvent the Great Firewall and access foreign news and social media websites (Hainan’s plan has since been taken down from its website and reporting on it has been scrubbed).

3. We believe that Xi and China’s response to Trump’s threat to impose tariffs of up to $450 billion worth of Chinese goods hinges on subsequent U.S. action.

Commerce Secretary Wilbur Ross said in a Senate Finance hearing on June 20 that the Trump administration has to put on “maximum pressure” if the U.S. is to have any hope of fixing the “big questions” of IP abuse and unfair trade practices. If Trump stays the course, the Chinese regime would unlikely escalate the trade conflict beyond the tariffs of $50 billion and would instead hasten the opening up its economy. Expect Xi and CCP propaganda to sell the opening up as a self-initiated “national strategy” and not a concession to American pressure.

If the Trump administration backs down, however, Beijing would likely “punch back” strongly. American businesses in China could even be targeted with fines, investigations, and other inconveniences.