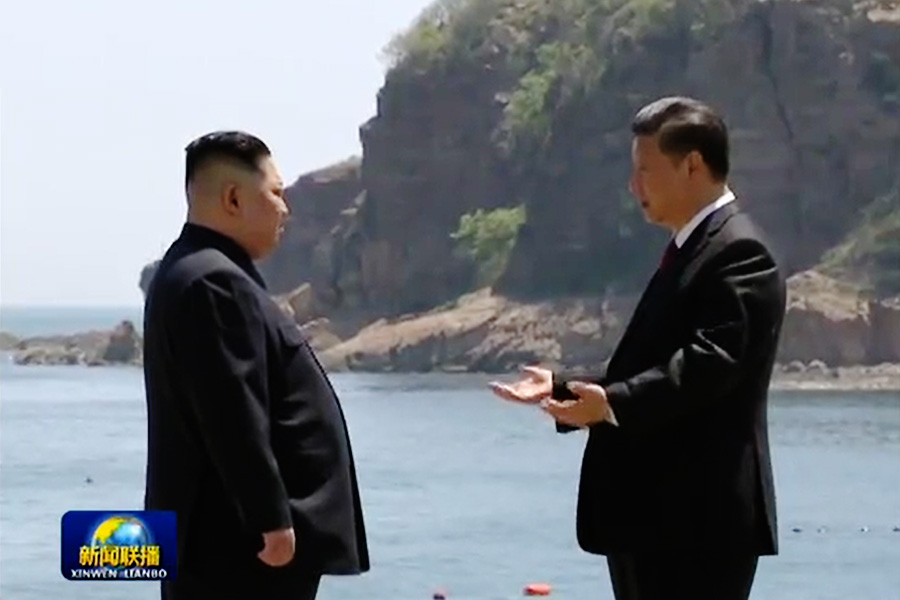 On May 16, North Korean state media KCNA said that North Korea is suspending high-level talks with South Korea scheduled for the day in light of a joint military exercise between the United States and South Korea.

KCNA claimed that the military drills, known as Max Thunder, was a “flagrant challenge” to the Panmunjom Declaration, and warned that the U.S. “will also have to undertake careful deliberations about the fate of the planned North Korea-U.S. summit in light of this provocative military ruckus jointly conducted with the South Korean authorities.”

State Department spokeswoman Heather Nauert said that U.S. officials received no notification that there would be a change in plans for the June 12 summit between President Donald Trump and North Korean leader Kim Jong Un.

The backdrop:
April 27: Both Koreas sign the Panmunjom Declaration, a statement of “peace, prosperity and unification” of the Korean Peninsula.

May 11: The annual Max Thunder joint military drills begin. The drills, which are held over two weeks, involve 100 warplanes, including eight F-22 advanced fighters and an unspecified number of F-15K fighters and B-52 bombers.

North Korea announces that it would be dismantling its nuclear test site between May 23 to May 25, and would invite international journalists from several countries to cover the event.

Our take:
1. North Korea’s “shock” move is hardly surprising. The North Korean regime had vacillated back and forth in past nuclear talks.

We have been analyzing developments on the Korean Peninsula from the perspective of the interests of the three key players, namely North Korea, China, and America. Based on current circumstances, the U.S. has nothing to lose if North Korea pulls out of the June summit. North Korea would face severe economic problems several months from now as it runs out of foreign exchange reserves.

Thus, we believe that North Korea’s latest move is more likely an attempt by Pyongyang to extract concessions from Beijing rather than a joint effort by Beijing and Pyongyang to outmaneuver the U.S. before the Trump-Kim summit.

2. We have written before that the PRC and the DPRK do not always see eye-to-eye historically. More recently, PRC and DPRK relations was in deep freeze and Xi never visited North Korea or met with Kim until their Beijing summit in March. We wrote that Kim likely decided to play the loyal vassal in visiting Xi after accounting for Trump’s “maximum pressure” campaign and Xi sidelining Kim’s allies in the CCP and consolidating power to a great degree in the Chinese regime.

Given the shaky new relationship between Xi and Kim, North Korea was always likely to deviate from script and attempt to play both China and America. This has already happened once with North Korean media claiming on May 6 that the U.S. was sabotaging the peace progress on the Korean Peninsula by “provoking” the DPRK. Xi appears to have tried to rein in Kim by summoning him for a two-day meeting in Dalian, where Kim again pledged to commit to denuclearization.

North Korea’s latest “about face” coincides with Liu He’s trip to Washington for trade talks. Given the impression that Beijing controls Pyongyang, the U.S. would be immediately suspicious of China’s commitment to getting North Korea to denuclearize and whether it would make concessions on trade. Kim Jong Un could be hoping that “reversal” gestures like those on May 6 and May 15 might give him leverage on Xi Jinping to extract a relaxation of sanctions and economic aid from Beijing.

3. The Trump administration is not pressed for time on settling the North Korean nuclear crisis, and can afford to keep up its “maximum pressure” strategy on North Korea and China indefinitely. Trump and officials in his administration have repeatedly stressed that they could walk away from talks at any moment should Pyongyang prove uncooperative.

Meanwhile, the clock is ticking for North Korea and China. Facing stringent sanctions, Kim Jong Un is running out of time to choose between keeping his nuclear weapons and risk regime instability, or denuclearize and set his country on economic reform to preserve his rule. As for Xi Jinping, U.S. tariffs are fast approaching while the “national champion” ZTE is crippled by a U.S. ban. Xi has to demonstrate China’s ability to get North Korea to abandon its nuclear program quickly or risk regime destabilization as U.S. economic action takes its toll.

Of course, there is a slight chance that Beijing is secretly cooperating with Pyongyang to play out the U.S. by using the June 12 summit as a bargaining chip. If so, then Beijing is taking an immense risk in creating a situation it cannot control just when Liu He is beginning crucial trade talks to rescue ZTE and pull China away from the brink of trade war with America. Indeed, the downsides to the gambit far outweigh any positive gains which China and North Korea can hope to extract from the U.S.

What’s next:
1. Xi Jinping is known to dislike Kim Jong Un, but appears to be treating him well to facilitate denuclearization on the Korean Peninsula. Kim’s latest stunt, however, may prove to be a bridge too far. Expect Xi to tighten sanctions on North Korea to bring Kim to heel.

2. Trump and Xi could clarify the North Korean issue over another phone call. Both sides could issue statements reiterating their stance on denuclearization. Trump might even comment on the “difficulties” that Xi faces.

3. Given the pressing need to gain a reprieve for ZTE and get the U.S. to rescind “Section 301” tariffs, China should not dare to push America too much in trade discussions. In fact, China may end up making more concessions to assure the Trump administration that it is not working with North Korea to sabotage the June 12 summit. Expect a resolution of sorts to Sino-U.S. trade tensions before June.