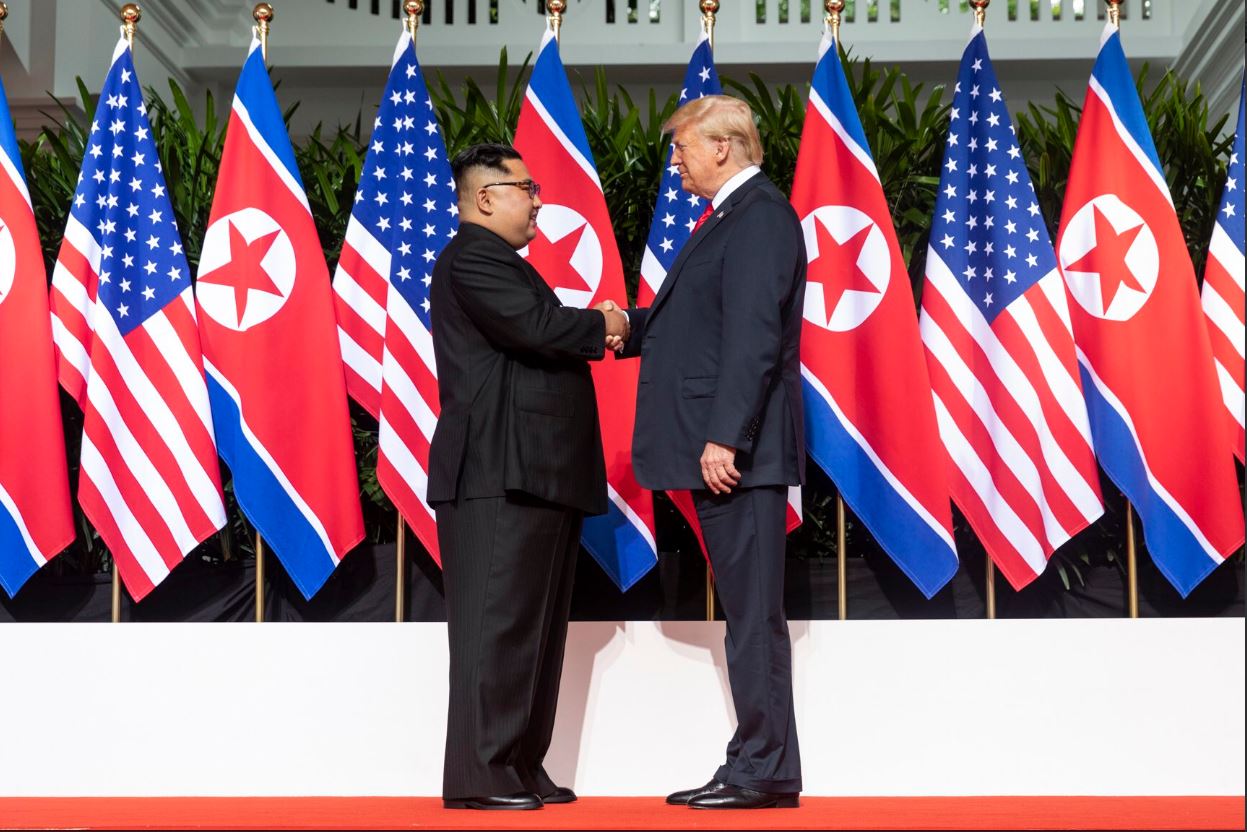 ◎ We predicted in March after Kim met Xi in Beijing that North Korea would denuclearize and a peace treaty to end the Korean war would be signed.

United States President Donald Trump and North Korean leader Kim Jong Un signed a joint statement at the end of their summit in Singapore on June 12. After signing the statement, Trump said that they would “take care of a very big and very dangerous problem for the world” while Kim said that they would “leave the past behind” and that the world “will see a major change.”

According to the statement: “President Trump committed to provide security guarantees to the DPRK and Chairman Kim Jong Un reaffirmed his firm and unwavering commitment to complete denuclearization of the Korean Peninsula.” The statement also noted that the U.S. and North Korea agreed to establish new relations; “build a lasting and stable peace regime on the Korean Peninsula”; reaffirm the April 27 Panmunjom Declaration signed between North and South Korea; and recover the POW/MIA remains of those killed during the Korean War.

Speaking at a press conference after the summit, Trump said that “some things were agreed and not reflected in the agreement,” including North Korea dismantling a major engine-testing site used for missiles. “This is complete denuclearization of North Korea’s — it will be verified,” he said. Trump added that the denuclearization process would happen “quickly and fast.” Kim “wants to get it done. I really feel that very strongly,” Trump said.

When asked about involving South Korea and China in signing a peace treaty, Trump said that it would be “great to have China involved and of course South Korea.”

Trump also thanked Xi Jinping and China for helping them get “to this very historic day.” He said that “making a deal is a great thing for the world, it’s also a great thing for China, I can’t imagine that China is happy with someone having nuclear weapons so close.”

When asked about the sanctions campaign and ensuring China’s continued help, Trump said that America has “tremendous leverage” over China. “We’re having tough talks on trade. I think that affects China,” he said.

At a regular press briefing on June 12, Chinese foreign ministry spokesperson Geng Shuang said that sanction measures against North Korea “can be adjusted, including to pause or remove the relevant sanctions.”

Secretary of State Mike Pompeo would have follow-up negotiations with high-ranking North Korean officials to implement the outcomes of the Trump-Kim summit “at the earliest possible date,” according to the joint statement. “Tomorrow Seoul, then on to Beijing to continue to build the team to achieve the denuclearization of the Korean Peninsula,” Pompeo tweeted on June 12.

While Trump scrapped the Singapore summit in late May after an “about-face” by North Korea, it was later rescheduled as originally planned when Pyongyang demonstrated sincerity in having the summit.

The summit also comes against the backdrop of a Sino-U.S. trade conflict.

Our take:
1. We predicted in March after Kim Jong Un met with Xi Jinping in Beijing that North Korea would denuclearize and a peace treaty to end the Korean war would be signed. The U.S.-DPRK joint statement at the Singapore summit brings our prediction another step closer to being fulfilled.

We would like to point out that SinoInsider never wavered from our March assessment of the North Korean situation despite the twists and turns (Kim unexpectedly meets Xi in Dalian, Trump cancels the summit, etc.) leading up to the Singapore summit. (Check out our analysis on North Korea here.)

Our analysis of North Korea is based on examining the interests and circumstances of the three major players, namely, North Korea, China, and the U.S. For in-depth reading, see our articles, “Why We Predicted Coming Peace on the Korean Peninsula” and “Yes, North Korea Will Give up Its Nukes and Kim Jong Un Is Crying to Prove It.”

Key to understanding Pyongyang’s willingness to denuclearize is the situation in China. And understanding China requires an accurate read of Chinese Communist Party elite politics, a SinoInsider specialty (we predicted the personnel reshuffle at the 19th Party Congress with over 80 percent accuracy and the Two Sessions reshuffle with over 70 percent accuracy, as well as the naming of former anti-corruption chief Wang Qishan as Chinese vice president). Put another way, an accurate reading of the goings-on in China allows for an accurate reading of geopolitical developments like Sino-U.S. trade issues and North Korea.

2. Many experts have derided the U.S.-DPRK joint statement. Their overwhelming negativity appears to be based on the lack of details in the statement and high expectations of what would follow. However, they would find much to be positive about if they would carefully consider the eventful path to the statement and the nature of the North Korean regime:

First, nobody would expect President Trump and Kim Jong Un to meet in the same room so quickly after they traded insults late last year. Yet Kim sought a summit with Trump barely six months later. They have since met and emerged with an agreement to move denuclearization forward and step away from war. This development in itself is an achievement.

Next, there was no guarantee that the meeting was going to take place at all, much less go smoothly. Trump canceled the meeting a little over a fortnight before it was due after he sensed insincerity from Pyongyang, and it took several gestures of good faith from the Kim regime before Trump resumed the summit. On the North Korean side, Kim and his high-level officials must have felt enormous pressure in having a face-to-face meeting with the “American imperialists” who they demonize in propaganda. Recall that the Korean War is technically not over because a peace treaty has not yet been signed, and that the North Korean elites would have legitimate fears and a deep suspicion of being disposed of by their enemy. Indeed, Kim Jong Un could have walked away from an agreement if he had felt uncomfortable with Trump and the Americans. In other words, the signing of an agreement itself was far from an empty gesture and a foregone conclusion.

Finally, the North Korea regime, like the Chinese regime, is very face-conscious. A detailed official joint statement would pose immense problems for Kim Jong Un when he sells the deal to his people. And if Kim’s authority is severely challenged, he cannot push through denuclearization, sign a peace treaty, and begin the liberalization of North Korea. Kim would very likely have made very specific concessions to the Trump administration behind closed doors; we believe that Trump had alluded to this in his press conference when he said that some things were “agreed but not reflected” in the joint statement. A hint that the North Korean made tangible concessions is Trump announcing a halt to “provocative” U.S.-South Korea joint military exercises while the denuclearization process is ongoing. We see a similar situation with the Sino-U.S. trade talks where Chinese officials bickered with their U.S. counterparts over the inclusion of very specific concessions in their joint statement. Of course, not releasing specific details in publicly released agreements with China and North Korea gives ammunition to critics who believe that the Trump administration achieved nothing in dealing with both communist regimes and gave up concessions when the situation could very well be the exact opposite.

What’s next:
1. Given the successful Singapore summit, there is a possibility that the Trump administration could again put tariffs on hold against China. However, the Trump administration should continue to call out the Chinese regime’s intellectual property abuses, demand trade reciprocity, and investigate Chinese companies that threaten U.S. national security. Meanwhile, to delay trade tensions for as long as possible, the Xi Jinping administration would very likely take unprecedented steps to open up China’s economy and market the reforms as “national strategy.”

2. If Secretary Pompeo builds up sufficient trust in follow-up discussions with the North Koreans and Pyongyang moves very rapidly in its denuclearization process, then the U.S., China, North Korea, and South Korea could sign a peace treaty as early as this July 27, the anniversary of the Korean War armistice. 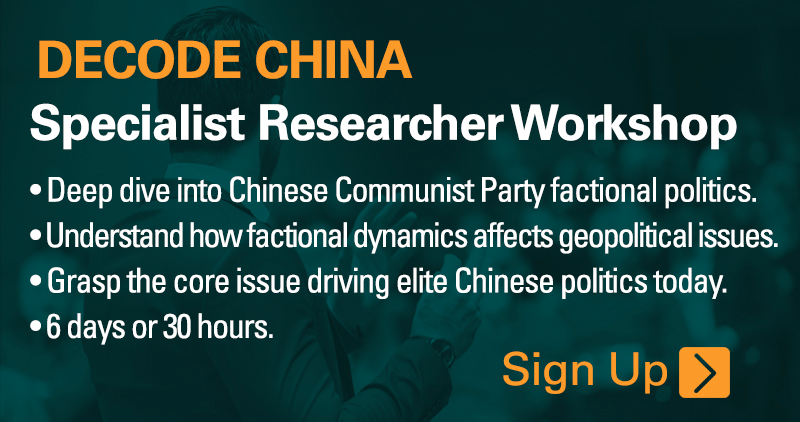