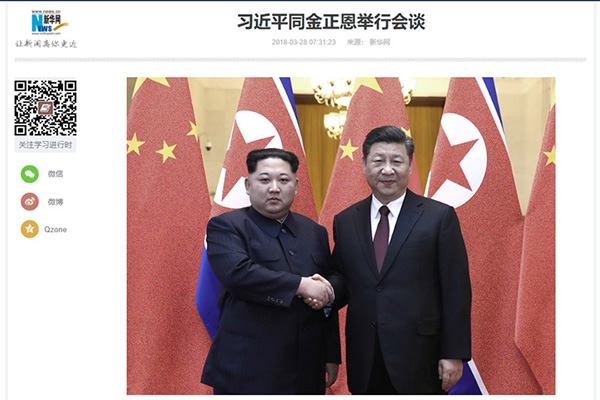 ◎ Trump could eventually get North Korea to sign a peace treaty.

According to the remarks of Xi and Kim as reported by Xinhua, Xi extracted a pledge from Kim to denuclearize North Korea. In return, Kim received affirmation of the “traditional friendship” between the PRC and the DPRK.

March 8: A South Korean delegation went to the White House and delivered a letter from Kim to President Donald Trump inviting him to meet. Trump agrees to meet Kim in May.

According to South Korean newspaper Chosun Ilbo, Chung was shocked that he was received with the “immense hospitality” more befitting of a head of state delegation. In the report, a source was quoted as saying that Yang Jiechi asked Chung to tell “all details about Kim Jong Un” during their talks.

March 22: Trump announces the appointment of John Bolton as National Security Advisor. Bolton is known for his hardline stance on North Korea.

Our take:
The state media account of the Xi-Kim meeting affirms our earlier analysis.

1. Kim Jong Un’s Beijing trip and statements suggest that he is willing to humble himself and play the loyal vassal to China and Xi Jinping. Kim’s sudden about-face after years of showing defiance to Beijing also indicates that his brinkmanship with big powers has very likely imperiled his rule, and he is forced to show obeisance to the friendlier power to preserve the Kim dynasty.

2. China now has North Korea’s promise that it will denuclearize, and Xi has kept the North Korean card in play for negotiations. The Xi-Kim summit and denuclearization talks could end up being China’s bargaining chip to get the U.S. to ease off on the trade war.

3. The rapid change in PRC-DPRK relations suggests that Trump’s “maximum pressure” strategy (economic sanctions and keeping the military option on the table) is very effective. Possibly fearing a military confrontation with America, Kim now appears to be willing to abandon his nuclear program even before meeting Trump.

4. In Beijing, Kim spoke of his determination to transform inter-Korea ties into a “relationship of reconciliation and cooperation.” If things on the Korean Peninsula continue along the current trajectory, Trump could eventually get North Korea to sign a peace treaty.