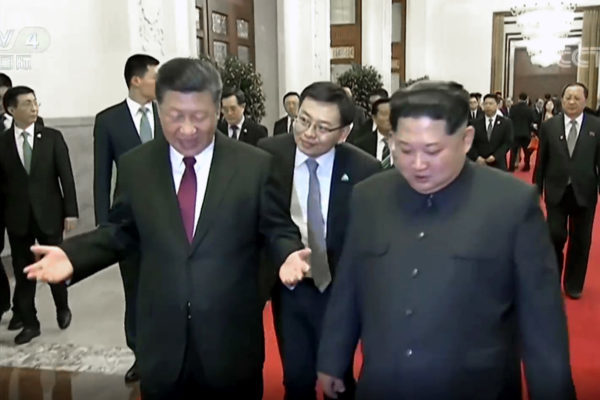 ◎ We believe that Trump won’t shift away from his “maximum pressure” strategy unless North Korea denuclearizes.

North Korean leader Kim Jong Un made a secret trip to Beijing from March 25 to March 28. News of his visit was only announced after the conclusion of his summit with Xi Jinping.

This is the first overseas trip Kim has made since 2011, and his first visit to China as North Korean leader.

Beijing broke with diplomatic conventions in receiving Kim:
1. Kim and his wife were treated to a state visit-level reception, a break from past visits by North Korean leaders.

2. Xi’s wife Peng Liyuan and Kim’s wife Ri Sol Ju accompanied their husbands for most of the proceedings. Neither Kim’s father or grandfather brought their spouse with them when they visited Beijing.

3. Both leaders and their wives watched an art performance, a gesture that is reminiscent of the treatment President Donald Trump received when he visited Beijing in November 2017.

4. Xinhua’s reporting of the meeting suggests that the Xi-Kim summit was a meeting between states and not the Chinese Communist Party (CCP) carrying out liaison work with a leader of a fellow communist country, as was the case with Kim’s predecessors.

According to a 3,400 character Xinhua communique, Xi and Kim discussed Party and state affairs between the two countries, as well as the situation on the Korean Peninsula.

The backdrop:
1. On March 28, Trump tweeted: “For years and through many administrations, everyone said that peace and the denuclearization of the Korean Peninsula was not even a small possibility. Now there is a good chance that Kim Jong Un will do what is right for his people and for humanity. Look forward to our meeting!”

2. Trump also tweeted: “Received message last night from XI JINPING of China that his meeting with KIM JONG UN went very well and that KIM looks forward to his meeting with me. In the meantime, and unfortunately, maximum sanctions and pressure must be maintained at all cost!”

The big picture:
1. Following months of “maximum pressure” by the Trump administration (stringent sanctions and threatening to use the military option), Kim Jong Un reached out to Trump for a meeting.

2. The Trump National Security Strategy identifies China as a “revisionist power” and a strategic “competitor.” In March, Trump fired the opening salvo in a trade war by announcing $60 billion in tariffs on Chinese imports.

3. Western countries are increasingly adopting a hardline stance towards China and Russia.

Our take:
1. We wrote on March 26 that neither China nor North Korea wants the United States to use the military option. Under Trump’s “maximum pressure” strategy and their respective domestic issues, however, both countries have no choice but to give ground to America.

2. We believe that Kim Jong Un is willing to be a vassal to Xi Jinping and abandon his nuclear program in exchange for being allowed to make a “state visit” to Beijing, to secure China’s promise of “friendship,” and ensure that North Korea’s interests are preserved when he enters into negotiations with Trump.

3. The odds of seeing peace on the Korean Peninsula are very high if America and China show Kim Jong Un sufficient “face” in exchange for him giving up nuclear weapons. For instance, Xi and Trump could allow Kim to stay in power, lift sanctions, and resume economic aid to North Korea.

Should the above scenario play out, Kim could sell to the North Korean people a propaganda tale about how his nuclear program has frightened China and America into recognizing North Korea’s status as a powerful world nation. His survivalist strategy achieved, Kim could proceed to develop North Korea’s economy and find other ways to improve the lives of his people to sustain the lie.

4. From the Chinese perspective, a denuclearized Korean Peninsula would greatly lower the threat of war breaking out in the East Asian region. The U.S. would have no reason to attack North Korea, and North Korea will be much less dangerous to South Korea and Japan, who will begin to rely less on American military support. Meanwhile, the CCP gets to retain North Korea as a buffer zone and be assured that its leadership will listen to Beijing.

5. We believe that Trump won’t shift away from his “maximum pressure” strategy unless North Korea denuclearize. So Kim Jong Un can only choose between abandoning his nuclear program and preserving his rule, or preparing for an American invasion.