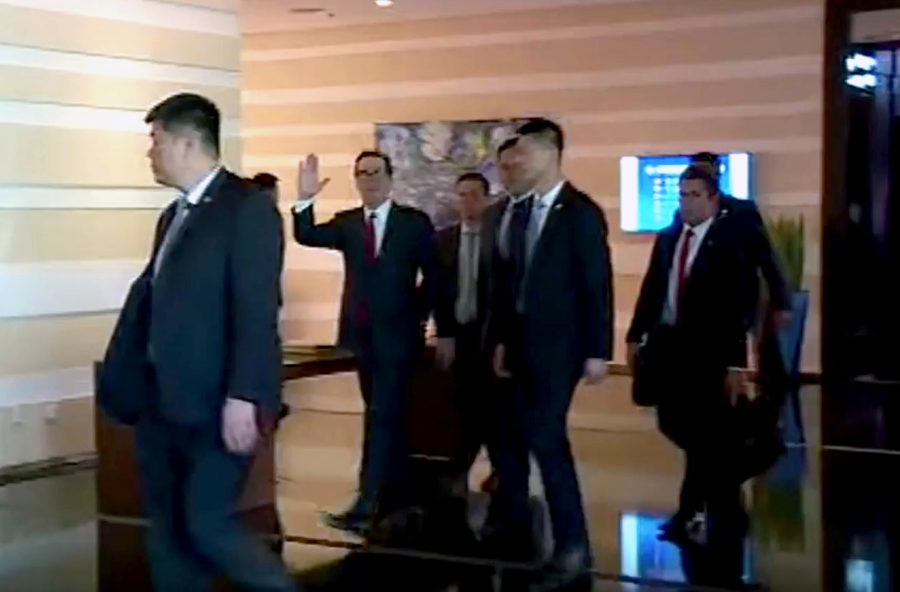 ◎ Should Beijing live up to its promises, the U.S. could eventually realize as much as 60 to 80 percent of its trade goals with China.

Two days of high-level Sino-U.S. trade talks in Beijing concluded on May 4. Neither side provided specifics on the outcome of the discussions.

Chinese state mouthpiece Xinhua said that the talks, which were led by vice premier Liu He on the Chinese side, were “constructive, candid and efficient,” but disagreements between the two countries remain “relatively big.” Xinhua added that there was “consensus” in some areas, and that a “working mechanism” would be set up to keep discussions going. Both sides remain committed to resolving trade disputes through dialogue, Xinhua said.

A White House statement said that the U.S. trade delegation led by U.S. Treasury Secretary Steven Mnuchin “held frank discussions with Chinese officials on rebalancing the United States–China bilateral economic relationship, improving China’s protection of intellectual property, and identifying policies that unfairly enforce technology transfers.” The statement added that President Donald Trump would decide the next steps. Speaking to reporters at the White House, Trump said: “I have great respect for President Xi. That’s why we’re being so nice.”

More details:
In the morning of May 4, Mnuchin told reporters that the U.S. delegation was having “very good conversations” as he was leaving his hotel to start the second day of talks.

According to The Wall Street Journal, both sides exchanged lists asking “sizeable demands” of each other.

The U.S. trade group’s in an eight-point trade and investment plan include:

Beijing’s demands were also presented in an eight-point framework, and include:

Meanwhile, according to a May 4 Radio Television Hong Kong report, China Banking and Insurance Regulatory Commission chairman Guo Shuqing said in response to a question that China was already opening up to a great degree and American pressure had no bearing on China’s economic liberalization.

Our take:
1. Most observers feel that little progress was made at the Sino-U.S. trade talks. We believe, however, that there was more progress than most assume despite the lack of outward agreement. America could have already secured Chinese pledges to make tangible concessions. Indeed, the U.S. could eventually realize as much as 60 to 80 percent of its trade goals with China, should Beijing live up to its promises.

Whether or not the U.S. suspends the imposition of tariffs is dependent on how much progress Beijing has made in actualizing its pledges.

2. Our optimistic outlook is based on three factors:

3. Based on our extended research into the Chinese Communist Party (CCP), we believe that it prioritizes regime stability above all, and would do anything or make any sacrifice to ensure survivability. If the CCP made heavy concessions at the Sino-U.S. trade talks, it would never admit to doing so publicly. Should observers later realize that China implemented reform measures that seem to be in line with U.S. demands, the CCP would simply claim that the measures were being made as part of its “ongoing” economic liberalization process and not due to U.S. pressure. And Chinese propaganda would seek to misdirect the Chinese people to believe that it was America, and not China, that made concessions. In the long run, the CCP would that hope to buy enough time to resolve its economic issues

The Trump administration probably already knows that importance of “face” to the Chinese regime, and appears to be playing along with Beijing to facilitate the implementation of concessions. The terse White House statement on the Sino-U.S. trade talks and Trump saying that he has “great respect” for Xi could be part of America’s trade strategy. As in handling North Korea, expect the Trump administration to proceed with great caution on Sino-U.S. trade issues, and maintain its “trust but verify” posture with China.

4. Presuming the points presented by both sides per The Wall Street Journal is accurate, we are predicting the following outcome: