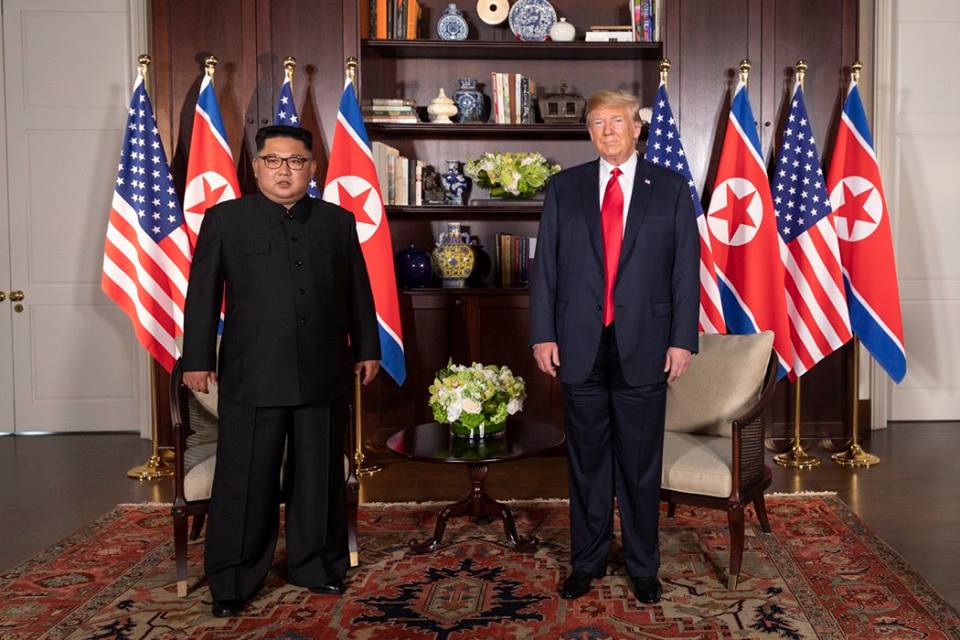 ◎ What we are seeing from Beijing and Pyongyang is textbook communist regime negotiation tactics.

Since the Trump-Kim summit in Singapore, signs have emerged which suggest that North Korea may not be working to denuclearize quickly. While United States President Donald Trump said that North Korean leader Kim Jong Un had promised to destroy a missile engines testing site, recent satellite images reveal no progress on that front. Instead, Pyongyang appears to have expanded a key missile-manufacturing plant and is stepping up production of nuclear fuel at several secret sites, according to reports in U.S. media.

There are also signs that Beijing might be giving Pyongyang incentive to slow-walk the process of abandoning its nuclear program.

U.S. Secretary of State Mike Pompeo told a Senate hearing on June 27 that China was “not enforcing control over their cross-border areas as vigorously as they were six or 12 months ago.” The next day, Pompeo brought up the issue of North Korean sanctions to Chinese Foreign Minister Wang Yi in a telephone call.

Meanwhile, Japan’s Yomiuri Shimbun reported on July 1 that Kim had asked Chinese leader Xi Jinping to “make efforts to get the sanctions lifted as soon as possible” during talks in Beijing from June 19 to June 20. Xi reportedly replied that he would “make my utmost efforts.” Kim also requested security guarantees from Xi and for economic help should the U.S. not provide any after North Korean denuclearization.

On July 2, South Korea’s Yonhap News reported that China appears to be slowing its tourist cooperation with North Korea after a U.S. complaint. North Korea’s Air Koryo canceled scheduled flights between Chengdu and Pyongyang on June 28 and suspended further flights. Yonhap said that the move embarrassed Chinese tour agencies which had sold tour group packages to Chinese tourists. An industry official was quoted as saying that the suspension was “caused by political reasons.”

The Trump administration seems to be taking the news of North Korea’s “backslide” in its stride. On June 27, The Financial Times reported that Secretary Mike Pompeo would be traveling to North Korea this week for talks about the country’s denuclearization plans. Speaking to CBS on July 1, White House National Security Advisor John Bolton said that Pompeo would discuss with the North Koreans “how to dismantle all of their WMD and ballistic missile programs in a year.” Bolton declined to comment on the intelligence leaks regarding North Korea, and said that the Trump administration is “very well aware of North Korea’s patterns of behavior over decades of negotiating with the United States.” On July 2, the White House confirmed that Pompeo would fly to Pyongyang on July 5.

“We know exactly what the risks are of them using negotiations to drag out the length of time they have to continue their nuclear chemical biological weapons programs and ballistic missiles. President would like to see these discussions move promptly to get a resolution,” Bolton said. He added that “there’s not any-any starry eyed feeling” in the administration regarding North Korean denuclearization.

Our take:
None of the recent developments have convinced us to alter our earliest assessment in March that North Korea would denuclearize. What we are seeing from Beijing and Pyongyang is textbook communist regime negotiation tactics. Also, the “backsliding” is taking place in part because of the Trump administration’s decision to go ahead with tariffs on Chinese goods.

Revisiting what we wrote on June 15: “Xi Jinping might not have a good relationship with Kim Jong Un, but the CCP has long had an influence over its brother communist regime in North Korea. In retaliation for tariffs, the CCP could opt not to cooperate with the U.S. in enforcing sanctions and instead find ways to aid Pyongyang, or drive a wedge between the U.S. and North Korea. The denuclearization of North Korea may not occur as easily as the Trump administration might expect post-tariffs.”

Again, we believe that Kim Jong Un is serious about denuclearization. U.S. pressure would see that Kim eventually accomplishes the task rather quickly. However, it should not be surprising to see several twists and turns, including more “backsliding” after progress has been made, before North Korea is nuclear-free.

Here is our country-by-country prognosis.

North Korea
1) It is natural for Pyongyang to draw closer to Beijing after the thaw in Kim Jong Un and Xi Jinping’s relationship. Both countries are neighbors, and the People’s Republic of China and the Democratic People’s Republic of Korea still have an alliance treaty. Further, one meeting between Trump and Kim is not enough to completely erase the decades of fear which North Korea feels towards the U.S.

Observers, however, should refrain from reading too much into Kim drawing closer towards Xi. Kim is trying to extract maximum benefit for North Korea from both China and America in exchange for denuclearization. Should China be unable to adequately support North Korea (possibly when the Sino-U.S. trade dispute takes its toll on the Chinese economy), Kim could easily pivot fully towards Trump to secure his interests.

According to the July 1 Yomiuri Shimbun report about the third Xi-Kim meeting, Kim noted that his positive impression of President Trump and said, “We can talk. He has a big heart.” Meanwhile, Xi Jinping “apparently tried to temper North Korea’s rapid moves to get closer to the United States” by saying, “rather than being hasty, I hope [North Korea] keeps up negotiations with the United States while continuing consultations with China.”

2) It is in Kim’s interest to drag out the process of denuclearization, his best bargaining chip, in the hope that China and America would grant North Korea more concessions over time. Beijing’s recent relaxation of sanctions allows Pyongyang to be bolder in putting off the abandonment of its nuclear program. Denuclearization should speed up, however, when Kim is faced with a situation where delays imperil his regime, i.e. the Sino-U.S. trade conflict disadvantages China to a point where Beijing caves to Washington’s demands and fully supports the denuclearization of North Korea.

It is also in Kim’s interest for North Korea to cease all hostile rhetoric against the U.S. to consolidate the results of the Singapore summit. Before the summit, Pyongyang had already been quietly erasing its anti-American propaganda.

China
1) We previously wrote that the Xi Jinping administration likely links its helping with North Korea to China’s trade dispute with America. In other words, Xi might be expecting Trump to ease trade pressures in exchange for bringing North Korea to the negotiating table. If our presumption is accurate (an examination of recent Chinese Communist Party propaganda and policies suggests that our guess is good), then the Xi administration would have discovered with the announcement of U.S. tariffs after the Singapore summit that it has grossly misread Trump. Official talk and actions since the tariffs suggest that Beijing has no strategy to cope with the situation.

For the time being, Beijing appears to be trying the gambit of “running out the clock” until the U.S. midterm elections in November. A “blue wave” would weaken the Trump administration’s ability to govern and possibly affect Trump’s China policies. Meanwhile, Beijing tactics like encouraging Pyongyang to delay denuclearization by relaxing sanctions or not immediately seek fresh trade talks would indirectly ramp up domestic pressure against the Trump administration. American businesses have already been petitioning Trump to drop tariffs (likely out of fear of a China “punch back”), while critics of the administration would undoubtedly latch on North Korea’s “backslide” on denuclearization to declare a U.S. diplomatic “defeat.” Beijing could be gambling that American domestic drama unfolds in a manner that gives it leverage in future Sino-U.S. trade talks.

Of course, the gambit, if there is indeed one, could go horribly wrong for Beijing. A “red wave” in November would empower the Trump administration to take further action against China and North Korea. And trust between Xi Jinping and Donald Trump, seemingly shaken after Kim Jong Un met with Xi unannounced in Dalian, could be severely eroded to the detriment of Sino-U.S. relations. A full-blown trade war could become unavoidable, and the odds of survival for the Chinese regime and its leadership would be extremely slim.

2) Gambit or not, it is in Beijing’s interest to see a denuclearized Korean Peninsula with Kim Jong Un running North Korea as China’s “buffer state.”

In the long-run, a nuclear North Korea poses a threat to China given the proximity of the two countries and the link between Pyongyang’s nuclear program and the CCP factional struggle. In the short-term, however, it appears that North Korean denuclearization, or lack thereof, has become a bargaining chip for China in the Sino-U.S. trade dispute.

3) Russia could end up playing a pivotal role to shift the current geopolitical balance. While Russian leader Vladimir Putin was feted on his state visit to China in early June, he could still shift his support to the U.S. if he senses that the geopolitical winds do not favor China. Indeed, Trump might do a reverse Nixon by forging an alliance of sorts with Russia against communist China. The forthcoming Trump-Putin meeting in July is a must-watch.

America
1) In our June 15 article, we wrote: “Trump and his administration might believe that they can deal effectively with North Korea without the support of Xi and China. This line of thinking, however, reflects a gross lack of understanding of how the CCP operates and retaliates.”

North Korea’s apparent “backslide” somewhat validates our prior assessment. However, the U.S. can still rein in North Korea and China at this stage of affairs.

Unless Beijing makes concrete efforts to immediately open up China’s economy (not gradual liberalization over three to five years), the Trump administration has to maintain, and even slightly ratchet up, trade pressure on China. China cannot withstand a trade war with America with its worsening economy and mounting social problems, and the Chinese regime could soon find that it cannot afford to relax sanctions against North Korea under sustained U.S. pressure. And when Beijing folds, Pyongyang folds. Put another way, the Trump administration’s best option would be to engage the two communist regimes in a game of “chicken” that the U.S. has no way of losing. Given Trump’s history of doubling down when faced with adversity, we do not expect America to be the party that swerves.

The CCP, however, would unlikely go down without a fight when pushed to the cliff’s edge. While CCP propaganda is currently acting on orders to de-escalate trade tensions, its direction can be immediately flipped in the extreme situation where the Sino-U.S. trade dispute puts China’s economy on the verge of collapse. In this scenario, there is a very good chance that the CCP propaganda apparatus would be mobilized to fan anti-American sentiments on the mainland, as well as play up social tensions in the U.S. and influence key communities to challenge the Trump administration. To guard against this outcome, the U.S. has to prepare to counter CCP propaganda and disinformation while keeping up trade pressure against China.

Read more:
The Potentially Dire Implications of US Tariffs on China