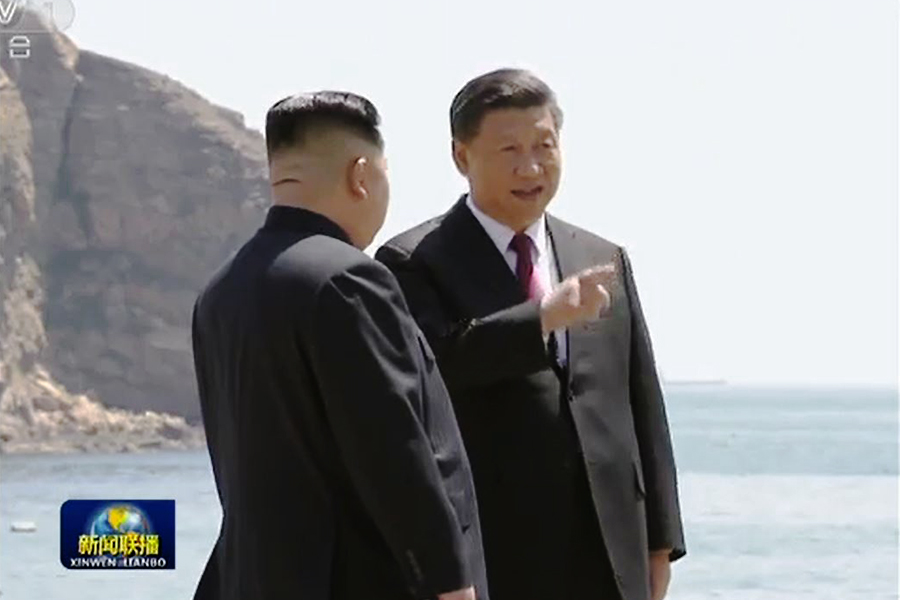 ◎ The Trump administration still has cards to play to keep pressuring the CCP.

After trade discussions between China and the United States in Beijing concluded on May 4, several geopolitical developments have unfolded which further affirm our analysis of positive Sino-U.S. talks on trade.

The backdrop:
May 6: A North Korean foreign ministry spokesperson was quoted by state media as saying that Washington was “misleading public opinion” by claiming that sanctions and other pressures led to Pyongyang’s denuclearization pledge. The spokesperson also accused America of disregarding North Korea’s efforts to pursue peace and “deliberately provoking” the DPRK.

May 7-May 8: North Korean leader Kim Jong Un traveled to Dalian by plane for a two-day meeting with Xi Jinping. He again called for “phased” denuclearization, and said that “so long as relevant parties eliminate hostile policies and security threats toward North Korea, North Korea has no need to be a nuclear state, and denuclearization can be realized.” State media said that Kim highly praised Xi’s “profound vision and extraordinary wisdom” and expressed gratitude for Beijing’s “long-standing and significant contribution” to realizing denuclearization on the Korean Peninsula.

May 8: The White House readout of a call between President Donald Trump and Xi said that both leaders “agreed on the importance of continued implementation of sanctions on North Korea until it permanently dismantles its nuclear and missile programs.”

The Xinhua readout said that Xi stressed China’s support for the Trump-Xi meeting and hoped for progress on the political resolution to the Korean Peninsula issue. Xi added that China is “willing to play an active role in realizing the denuclearization of the Peninsula and the long-term stability of the region.”

Later, Trump announced that the U.S. is withdrawing from the 2015 Iran nuclear deal and would impose the “highest level of economic sanctions” on the Iran regime. He added that Secretary of State Mike Pompeo was en route to North Korea to make preparations for the coming Trump-Kim summit. “Hopefully, a deal will happen. And with the help of China, South Korea, and Japan, a future of great prosperity and security can be achieved for everyone,” Trump said.

Our take:
1. We believe that North Korea’s criticism of the U.S. is chiefly for domestic propaganda purposes, and partly a ploy to gain some bargaining leverage. However, such rhetoric merely reinforces the negative international perception of the North Korean regime, and grants Trump’s critics ammunition to downplay his diplomatic achievements. And should the Trump administration take a more negative view of North Korea’s sincerity to denuclearize and abandons talks, Beijing stands to lose a crucial bargaining chip to help it with Sino-U.S. trade negotiations.

2. Kim Jong Un flying to Dalian for his meeting with Xi Jinping suggests that it was Xi who issued urgent summons. Kim’s father and grandfather only ever took the train to China out of fear of their security onboard an airplane (Kim Jong Il made an eight-days-and-eight-nights train trip to Russia in 2001). While Kim is less averse to air travel than his forebears, flying to nearby China is an especially rare and curious move. Dalian was perhaps chosen as the destination for Xi and Kim’s second summit because it is about halfway between Beijing and Pyongyang, and in considering the condition of North Korea’s old state-owned aircraft.

3. Likewise, Xi Jinping’s call for “phased” denuclearization and the mention of Trump “valuing” the Chinese position in the Xinhua readout of the Xi-Trump call caters to a domestic audience. The rhetoric projects the impression that Beijing is not being bullied by America and is the party urging restraint and goodwill on the North Korean issue. The U.S. is a free society, and the Trump administration can be forthright about its demands for North Korea to “permanently dismantle” its nuclear and missiles program.

4. Trump pulling out of the Iran deal and announcing that the “highest level of economic sanctions” would be imposed on Iran sends a clear message to North Korea that the U.S. is serious about its denuclearization demands, and that Kim Jong Un should not try to play tricks with America.

For a recap of our analysis on the North Korean issue, see here, here, and here.

The backdrop:
May 5: A People’s Daily commentary piece (“A Mutually Beneficial and Win-Win Resolution to the China-US Trade “Roadblock”) wrote that the “fog has been lifted” after a month of “stormy” trade issues. China and the U.S. have moved from “tit-for-tat tensions to having an exchange of views at the table,” a “positive signal for the stability of the global economy.”

Meanwhile, Xinhua’s commentary (“Honest Communications Till the End”) used courteous language to describe the meeting between the top U.S. delegation and the Chinese team in Beijing, and added that “bargaining is inevitable in negotiations.” The commentary also stressed that China wouldn’t give ground to the Americans and would instead continue with its national policy of reform and opening up.

May 7: The White House announced that Chinese vice premier Liu He would be visiting Washington the following week to carry on trade discussions with the Trump administration.

May 8: President Trump tweeted that he would be speaking with “my friend, President Xi of China,” on North Korea, “where relationships and trust are building,” and Sino-U.S. trade, “where good things will happen.”

The White House readout of the call between Trump and Xi wrote that Trump “affirmed his commitment to ensuring that the trade and investment relationship between the United States and China is balanced and benefits American businesses and workers.”

The Xinhua readout had Xi reminding Trump to “earnestly implement” a “consensus” they reached during their meeting in Beijing, and described the Sino-U.S. trade talks were “candid, efficient, and constructive.” The readout added that both parties should “maintain communications, strive to find solutions to existing differences, and achieve mutually beneficial and win-win results,” and the U.S. is willing to “handle the trade issue appropriately.”

Meanwhile, Xinhua positioned an article titled “Xi Jinping in 2018: Watchword for April—Opening Up” in a prominent position on its Chinese language website. On the same page, Xinhua reported that former Chongqing Party secretary and Politburo member Sun Zhengcai was sentenced to life in prison.

Our take:
1. We wrote previously that China cannot withstand a full-blown trade war with America (see here, here, and here). Also, tough U.S. action against state-backed Chinese telecommunications equipment makers ZTE and Huawei threaten to upend the CCP myth of high-tech dominance. So to preserve regime stability, the CCP would seek to pressure North Korea to abandon its nuclear and missile program in exchange for a lessening of American trade and tech pressure.

2. We believe that the results of the Sino-U.S. trade talks from May 3 to May 4 led to Xi Jinping summoning Kim Jong Un to Dalian, and Secretary Pompeo visiting North Korea. Given how the Sino-U.S. trade issue and North Korea are linked, if there was little or no progress made in Beijing, there would be little incentive on both sides to work together on reining in Pyongyang. The secrecy surrounding the recent developments also hint at the scale of what China and the U.S. are trying to achieve.

See here, here, and here for more of our take on the Sino-U.S. trade talks.

3. We wrote earlier that:

The May 5 commentaries in the People’s Daily and Xinhua corroborates our assessment of the CCP’s reaction to making concessions. While some tough language is used, phrases like the “fog has been lifted” reveals a 180-degree attitude change towards the U.S. on trade.

Also, Liu He’s impending trip to Washington suggests that the CCP wants to quickly realize the outcomes of the Beijing Sino-U.S. trade talks before American tariffs take effect in June.

4. The Chinese language Xinhua website on May 8 affirms our analysis of positive trade discussions between America and China.

The lead article, “Xi Jinping in 2018: Watchword for April—Opening Up,” adds to the impression that China is carrying out economic reforms on its own terms. Xi has been talking about “opening up” since the 19th Party Congress, but Xinhua only chose to spotlight the policy right after China had trade talks with America (previous “watchwords” include “leadership of the Party,” “struggle,” and “Two Sessions).

Announcing the sentencing of Sun Zhengcai underneath a call for reform sends a strong message to Xi’s Party rivals not to interfere with Sino-U.S. trade discussions and Xi’s North Korea policy—or else. Except for anti-corruption work, Xi was unable to implement most of the reforms proposed at the third plenary session in 2013 because he faced great resistance from the influential Jiang Zemin faction.

5. The differences in the White House and Xinhua readouts of the Xi-Trump call on the trade is due to the differences in the political systems in China and the U.S. The Xinhua readout uses language that gives face to the CCP and Xi Jinping without revealing the outcome of the Sino-U.S. talks. Meanwhile, the White House readout makes it clear that the “win-win” scenario is a balancing of trade relations with China in favor of American workers and businesses.

The backdrop:
May 4: Kenneth Juster, the U.S. ambassador to India, met the Dalai Lama at his residence in Dharamsala. Mainland Chinese media appeared to avoid covering this meeting.

May 7: The U.S. Embassy in China posted a translation of a White House press secretary’s May 5 on “China’s Political Correctness” on its official Weibo account. The statement describes the Chinese Civil Aviation Administration’s attempt to force airliners to change how Taiwan, Hong Kong, and Macao are identified on their website as “Orwellian nonsense,” and says that the action is “part of a growing trend by the Chinese Communist Party to impose its political views on American citizens and private companies.”

Chinese censors have since scrubbed the positive comments to the U.S. Embassy Weibo post, leaving only negative responses. Users can now only view part of the post. Weibo, a Twitter-like service, has also blocked sharing and forwarding of the post, but has yet to take it down.

Our take:
1. In our May 6 article, we noted that the Trump administration could spotlight the CCP’s human rights violations to consolidate the results of the trade talks. The administration’s recent moves somewhat verify our theory.

2. Since the 1989 Tiananmen Square massacre, the CCP has resorted to giving benefits (particularly the economic sort) to the international community in exchange for silence on its human rights abuses. The CCP has been very successful on this front, and has managed to marginalize the world’s attention to the issue of Tibet and the persecution of Falun Gong, for example. Meanwhile, the CCP tries to squeeze Taiwan out of the international community over the long haul, and frequently uses economic benefits to force countries to change their diplomatic stance towards Taiwan.

After the Sino-U.S. trade talks, however, the U.S. has come out strongly in support of Taiwan (airliner issue) and Tibet (visiting the Dalai Lama). The CCP’s relatively muted responses to American action suggest that it is very afraid of a trade war, and dares not pick a real fight with the U.S. on human rights issue in case it jeopardizes the trade consensus.

3. The Trump administration still has cards to play to keep pressuring the CCP. For instance, America could draw greater attention to H.Res 343, which condemns the CCP for the organ harvesting of prisoners of conscience, the bulk of whom are Falun Gong adherents. And the Falun Gong is the human rights issue that the CCP most fears receiving international scrutiny, as evidenced by its continued anti-Falun Gong united front tactics abroad and heavy censorship of “Falun Gong” as a term in Chinese search engines and social media.

To stop the Trump administration from escalating its confrontational approach to the CCP’s human rights violations, the CCP would likely be very accommodating in making trade concessions.