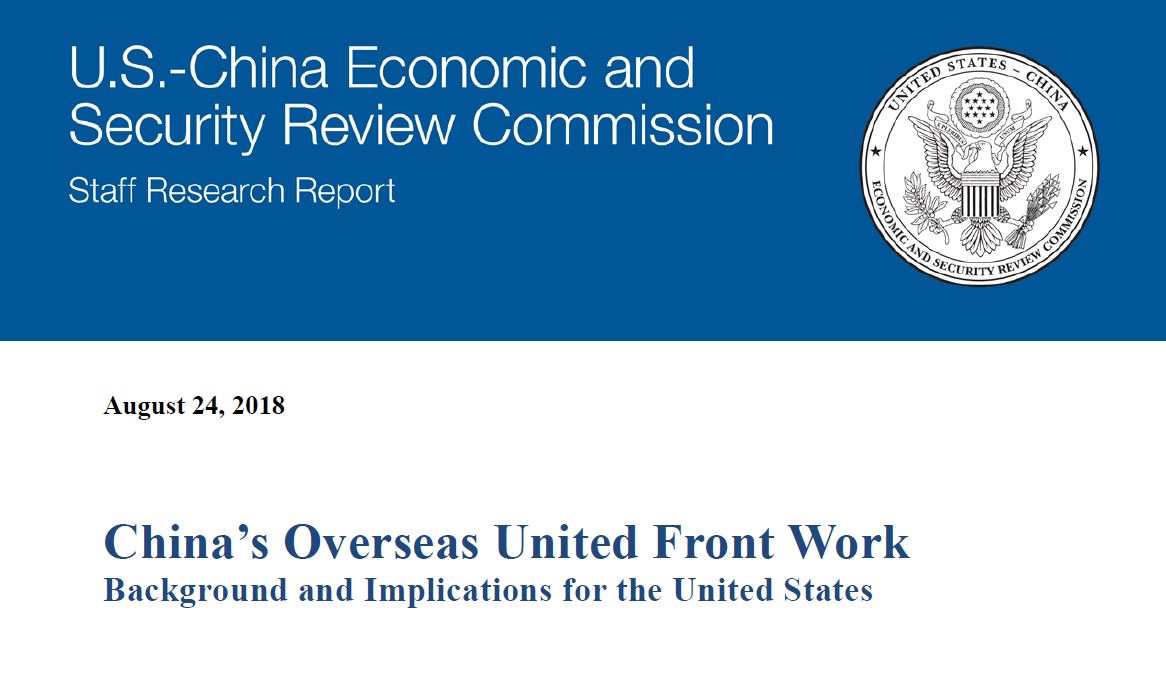 Geopolitics Watch: The Coming Ideological Turn in US Policy on China

On Aug. 24, the U.S.-China Economic and Security Review Commission published a report on the Chinese Communist Party’s (CCP) United Front work overseas and its challenges to the United States.

The 39-page commission report, which draws mainly from secondary sources, gives a background of the CCP United Work Front Department and some of its associated organizations. The report also spotlights some United Front activities in the U.S. and other target countries, and concludes by exploring the implications of CCP influence operations.

Two segments in the congressional commission report touch on the ideological aspect of the CCP’s United Front strategy in America.

First, the report notes that the CCP “sought to influence academic discourse on China and in certain instances has infringed upon—and potentially criminally violated—rights to freedoms of speech and association that are guaranteed to Americans and those protected by U.S. laws.” Several Washington think tanks and academic institutions received funding from the China-United States Exchange Foundation (CUSEF), a Hong Kong-based nonprofit of Dr. Tung Chee-hwa. Tung is vice-chairman of the Chinese People’s Political Consultative Conference National Committee, a Party organization which directs United Front work. The report also cites Senator Ted Cruz (R-Texas) as saying that the CCP “attempts to use ‘Americans who unwittingly promote CCP ideology’ as a ‘countering voice’ in the China debate.”

Second, the report notes that the challenge of countering United Front operations is “complicated by the CCP’s insistence that the CCP is inseparable from China.” However, “simplistically framing the debate over China’s overseas United Front work as ‘Chinese’ influence conflates the positive influence that Chinese culture and people have with the targeted subversive influence of a foreign power designed to shape U.S. policy in ways that may be against the United States’ own interests.”

The congressional commission report is the latest in a string of measures and statements by the U.S. which seem to suggest that America is paying greater attention to ideological matters in addressing the CCP threat:

Very few CCP elites, however, are ideologically-inclined. The Party continues to promote Marxism chiefly to preserve its political legitimacy.

2. During times of crisis, CCP leaderships typically ramp up ideological efforts to heighten its control society, the military, and the Party. The Xi Jinping leadership’s “embrace” of Marxism at the start of Sino-U.S. trade talks appears to be a preemptive move to tighten control over the regime in case a full-blown trade war breaks out and endangers Party rule. With President Donald Trump threatening to tariff all Chinese imports to the U.S., the CCP would likely roll out stronger ideological initiatives and suppressive measures as per its political culture.

3. The CCP is aware that giving in to America’s trade and intellectual property protection demands is a challenge to its ideology. This is clear from the latest round of Sino-U.S. trade talks on Aug. 22 to Aug. 23 where Chinese officials said they would not negotiate U.S. demands for China to change its industrial policy (including ending unfair subsidies to its Made in China 2025 program, allowing U.S. data firms to operate without interference, and forced technology transfers) due to “national security or political reasons.”

The CCP’s economic system is derived from its own ideology (not entirely Marxism) and values (“deceit, perniciousness, and struggle,” or “Jia, E, Dou”). Should the CCP acquiesce to America’s demands, it can no longer exploit the Chinese people (“locking” the people’s wealth in the property markets, giving preference to state-owned enterprises over the private sector, corruption, etc.) or foreigners (IP theft, forced tech transfers, etc.) for its economic benefit. And a financially weakened CCP would have lesser control over society and is at higher risk of being ousted. Put another way, genuine economic reform is tantamount to an ideological shift, and a change of ideology is an existential issue for the CCP.

4. Xi Jinping appears to have anticipated an ideological clash with America in his first term.

In a recent essay submitted to the Chinese language edition of the Vision China Times, Xin Ziling, a former publishing chief at the China National Defense University, disclosed parts of a speech by Xi at a meeting of People’s Liberation Army elites in March 2014. According to Xin’s essay, Xi Jinping noted that the Cold War was essentially a clash between two world models, the free trade system promoted by America and the communist system advocated by the Soviet Union. Xi said that the Korean War and the Vietnam War was a direct result of the clash of global models, but added that the two wars were “not very meaningful” for the Chinese regime, which had “quietly accepted” the “correct” American “rules of the game” when it decided to “reform and open up” in the 1970s. However, the CCP today is “anti-America” because America opposes communism and “socialist revolutions,” while anti-communism remains a strong sentiment among Western experts and in Western society, according to Xi.

5. In considering the CCP factional struggle, Xi’s motive for focusing on ideology and expanding the CCP’s overseas influence operations apparatus have more to do with the immediate concerns of domestic power consolidation then global expansion. Before Xi took office, the Jiang Zemin faction was firmly in control of United Front work and the CCP spy system. To seize control of the CCP’s overseas influence operations apparatus, Xi had to offer a different political vision (“strong country dream” instead of “bide and hide”) to create an excuse to reform the apparatus (reshuffle personnel, streamline departments, etc.) and consolidate his authority. Xi used a similar tactic to gain control over other parts of the regime, including the military and propaganda.

While the CCP’s ideology dictates that it must eventually achieve world domination to guarantee its long-term survival, practical domestic considerations are at the forefront of the Xi leadership’s ideological push. Ironically, Xi’s domestic maneuvers have heightened global awareness of the CCP threat, and appears to be engendering an American pushback.

What’s next:
If the U.S. continues to draw attention to CCP influence operations and takes active steps to counter CCP propaganda, then America would have taken its “strategic competition” with the PRC to the ideological level. And unlike a trade conflict, ideological clashes cannot be resolved through negotiation but through zero-sum competition.

The CCP appears to have only recently realized that the trade dispute is just one front in which the U.S. is pushing back in the “cold war” which the CCP has been quietly waging for years. Regardless of how Xi Jinping responds, an ideological clash would lead to tremendous change in China. Change could come sooner rather than later given the ever-worsening state of the Chinese economy and the stagnation of Sino-U.S. trade talks. Businesses and investors in China must account for political risk to be prepared for America’s ideological turn on the PRC.