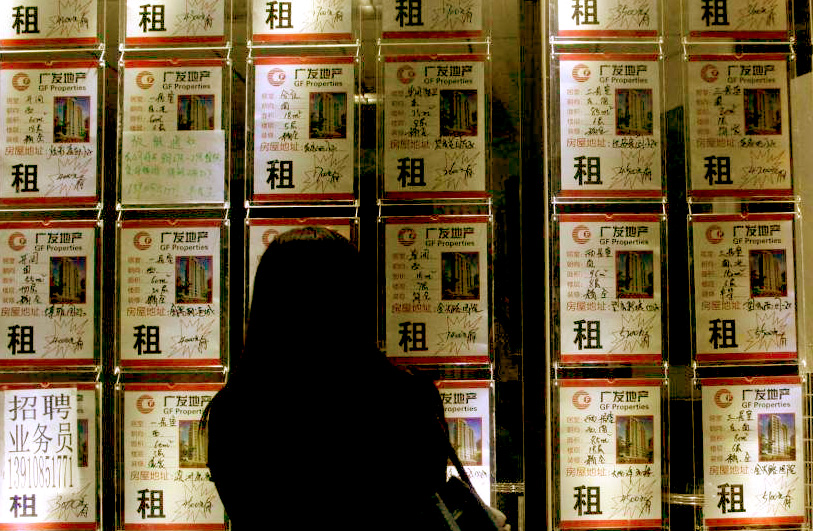 ◎ Whenever the central bank releases liquidity, the funds usually flow to the property markets.

Skyrocketing housing rental prices have become a hot topic in China recently. Property rental and sales companies have been accused of bidding up leases and inflating rent prices through various unscrupulous tactics.

According to property search engine Fangtianxia, the annual rental price of housing in 17 popular Chinese cities rose by over 8 percent between February 2017 and May 2018. Of the 17 cities, prices rose 19.5 percent in Shanghai, 15.5 percent in Shenzhen, and a whopping 25.9 percent in Beijing.

The backdrop:
On Aug. 17, several Beijing municipal departments, including the housing development bureau, the financial bureau, and the taxation bureau, summoned the heads of major housing rental companies like Ziroom, Xiangyu, and Dangkegongyu for a meeting. At the meeting, the rental companies were told that they must not use financing funds to snatch up apartment leases; must not drive up rental prices by monopolizing leases; and must not encourage landlords to terminate contracts to suit their apartment grab.

On the same day, Hu Jinghui, the vice president of rental company Woaiwojia, told the media that competitors like Ziroom and Dangkegongyu have been spoiling the property rental market by buying up apartment leases at prices that are 20 to 40 percent above the market value and renting the apartments out for even higher prices. On Aug. 18, Hu reportedly told a group of friends that Woaiwojia had dismissed him after a competitor’s chairman called his boss. The following day, Hu Jinghui held a press conference to talk about his firing, a move that ignited social debate.

On Aug. 20, the heads of 10 prominent property rental companies promised that they wouldn’t raise rental prices at a symposium organized by the Beijing’s real estate agency association. The companies also pledged to put out over 120,000 apartments on the market to stabilize prices.

The big picture:
Recently, the People’s Bank of China (PBoC) released significant amounts of liquidity in hopes of providing greater financial support for small and medium enterprises amid a weakening economy. However, commercial banks and financial institutions are not active in making loans.

Our take:
Why rental costs are rising
1. Supply and demand determine prices. The rise of rental prices in first-tier cities, however, is not due to an influx of outsiders. Official data shows that the population of long-term residents in Beijing (minus 30,000) and Shanghai (minus 75,200) have decreased at the end of 2017. Instead, it is the shrinking housing rental supply that is driving prices up.

The decrease in housing supply is due to the Chinese Communist Party’s (CCP) policies such as regulating rentals to groups, partitioning of apartments and basements, and the expulsion of the so-called “low-end population” and the demolishing of their dwellings in late 2017 (link).

Taking Beijing as an example, a large number of shantytowns, rental complexes, and industrial apartments in suburban areas have been demolished in recent years. These housing developments used to house large numbers of migrant workers. In 2017, a total of 59.85 million square meters worth of housing was demolished, while total housing constructed in 2016 was only 35.94 million square meters. The problems of the housing supply reduction in Beijing is compounded by the fact that most of the “low-end population” cannot afford to rent the newly constructed apartments.

2. Whenever the PBoC releases liquidity, the funds usually flow to the property markets. New housing policies (a freeze on prices, the imposition of a resale period, etc.) have “semi-frozen” first and second-hand property markets, while second-hand housing in Beijing and Shanghai can only be sold at a reduced price. The phenomenon of skyrocketing housing rentals is the result of funds seeking monopoly advantages in the property markets.

Since 2013, funds entering the property markets were being invested in long-term rental apartments. By the end of 2017, there were over 300 housing rental companies in Beijing, Shanghai, Guangzhou, and Shenzhen managing more than 2 million rooms.

After housing rental companies obtain financing, they proceed to buy up and hoard apartment leases, renovate apartments to raise their value, and use an N+1 payment model (upfront payment equal to total rental months plus 1-month deposit) to drive up rental prices.

3. At the end of 2017, the average rate of returns for housing rentals in China’s first-tier cities was 1.5 percent. Assuming housing and rental prices remain unchanged, homeowners require about 70 years to break even on their investments.

If the Chinese authorities go ahead with a planned property tax, then apartments cannot appreciate in value. When rental returns cannot make up for the tax, then homeowners would start selling their property. In this scenario, the property market would collapse, bad bank debts would soar, and a systemic financial crisis would be triggered.

The CCP does not want housing prices to skyrocket, yet it does not dare to let prices plummet. Hence, its only option is to tolerate rising rental prices to prevent housing prices from dropping. This way, the CCP can proceed to levy a property tax and use economic means to drive away the “low-end population” from the first-tier cities.

Rising rentals, however, would end up escalating, and not resolving, the CCP’s self-inflicted troubles with housing prices (see “Social risks”).

Financial risks
Most housing rental companies will guide tenants to take non-mortgage loans to pay (the N+1 model) for their sublease. Tenants end up making monthly payments plus interest to the rental companies or online lending platforms. The rental companies then bundle the loans as asset-backed securities, and earns the difference from the loan interest. The companies rely on high turnover to cover the cost of expanding their operations.

For example: Presuming that Beijing has 7.5 million apartments and housing rental firms divide each apartment into two smaller “apartments” (larger apartments can be divided into many smaller units), then there would be at least 15 million rooms for rental. If each unit is rented out at the average price of 2,000 yuan per month, then the rental companies stand to receive 48,000 yuan upfront out of a 2-year sublease from online lending companies; an average rental price of 5,000 yuan would translate into 120,000 yuan upfront. And if a housing rental company gains 10 percent of the rental market, it stands to take between 7.2 billion yuan to 18 billion yuan in rental fees at one go.

If the hypothetical housing rental company mentioned above uses financial derivatives and is triple leveraged, then it might at once be handling funds of over 21.6 billion yuan. And the scale of housing rental financing in Beijing could be greater than 216 billion yuan. When this highly leveraged model of generating funds is repeated on a large scale across the country, China will develop another P2P-type financial risk. The risks are real: In March, rental company Shanghai Aigongyu’s “capital chain” broke; in April, the capital chains of Changsha Youzuke and Cres & Asia Residence Group were reportedly in danger.

Social risks
According to an August 2017 report by China’s largest recruitment platform, 84.2 percent of fresh graduates need to rent apartments, and Beijing’s rental prices at the time amounted to 67 percent of their average monthly salary.

Skyrocketing rental prices directly affect young workers who cannot afford to buy houses on their salaries. When rents go up sharply, they would be forced to look for a job in another area. And when the workers start leaving in droves, the companies that hire them may have to close down. This vicious cycle would further weaken China’s economy.

The above scenario, if it unfolds, would ultimately threaten the CCP regime. According to China’s National Bureau of Statistics, the country’s permanent urban population was 813.47 million in 2017 while the urbanization rate was 58.52 percent. When compared with 2007, China’s urban population had grown by 200 million people. If the young people in first and second-tier cities are forced by circumstances to return to their rural hometowns, they will likely have difficulties looking for jobs and encounter livelihood problems. If the Sino-U.S. trade war is not resolved or escalates, the prices of food and other commodities would be driven up. The combination of large numbers of unemployed young people and price hikes would pose a severe threat to the CCP.