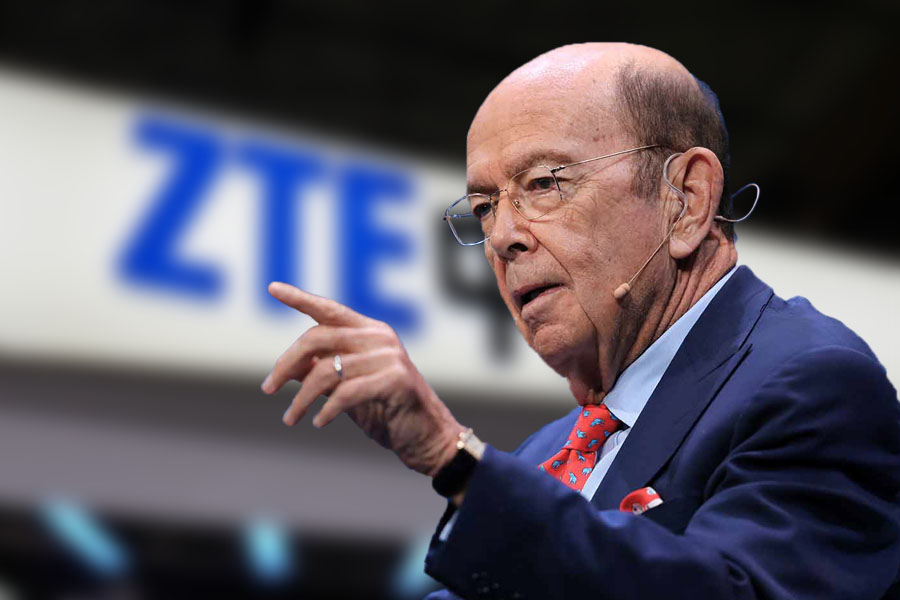 ◎ The new ZTE deal could later be regarded as an important milestone by the U.S. in advancing national security interests in dealings with China.

Under the deal, ZTE would have to:

The deal includes a suspended 10-year ban on buying U.S. components that would be activated in the event of any violations by ZTE within the probationary period.

In an interview with CNBC, Ross said that the new ZTE deal is “a pretty strict settlement. The strictest and largest settlement fine that has ever been brought by the Commerce Department against any violator of export controls.”

“This should serve as a very good deterrent not only for them but for other potential bad actors,” he added.

The big picture:
ZTE suspended major operations in April after the U.S. Commerce Department imposed a seven-year ban forbidding the company from purchasing U.S. components and services. The crippling ban was enacted because the U.S. found that ZTE had violated a 2017 agreement to not ship goods to Iran and North Korea.

The ZTE ban was handed out as trade tensions were ratcheting up between China and the U.S., and after President Donald Trump had agreed to meet North Korean leader Kim Jong Un for denuclearization talks.

Our take:
We wrote after Sino-U.S. trade discussions concluded on May 4 that the U.S. “could have already secured Chinese pledges to make tangible concessions,” and in exchange, would “put ZTE on ‘probation’ and very stringently monitor its future dealings with the Chinese company.” The new ZTE deal affirms our analysis.

Sino-U.S. trade
SinoInsider has been consistent in assessing that the U.S. made good progress in trade talks with China since the first round of trade talks in Beijing. The new ZTE deal suggests that discussions are continuing to go in the direction that the U.S. wants.

We wrote in earlier articles that the Trump administration knows the importance of “face” to Xi Jinping and should stay silent if Beijing had made big concessions to America. Michael Pillsbury, director of the Center for Chinese Strategy at the Hudson Institute and author of “The Hundred-Year Marathon,” made a similar point about “face” in there was a need for secrecy on both sides in an article about Trump winning the first round of trade talks.

We see secrecy at play again at the third round of trade talks in Beijing from June 2 to June 3. The U.S. issued no statement, while the Chinese statement noted that while “concrete progress” was achieved, all agreements with the U.S. would be voided if tariffs were back on. At least one U.S. media outlet reported that the Chinese trade delegation led by State Council vice premier Liu He offered to purchase $70 billion worth of American agriculture and energy goods in exchange for the U.S. lifting $50 billion worth of tariffs on Chinese imports, but U.S. officials are skeptical about the deal. At face value, the trickle of information on the latest round of trade discussions suggests a stalemate.

Conversely, we believe that a situation parallel to the first round of trade talks is at play. That is, the U.S. is maintaining absolute secrecy because China has made pledges of sizeable concessions (beyond the reported $70 billion deal, which may be intended to be a smokescreen). Loose lips from both sides could jeopardize the Xi Jinping administration’s implementation of the concessions; in particular, the deafening silence from the U.S. after the third round of trade talks could be a case of “lessons learned” from the experiences of the previous month. And in exchange for Chinese concessions, ZTE was thrown a “lifeline” by the U.S. Commerce Department.

U.S. national security
The Trump administration’s National Security Strategy (NSS) identifies China as a competitor. However, the NSS also notes that “competition does not always mean hostility, nor does it inevitably lead to conflict—although none should doubt our commitment to defend our interests.” Specifically on the issue of trade, the Trump administration is looking at “fair and reciprocal relationships” that “benefit all with equal levels of market access and opportunities for economic growth.”

The installation of a U.S.-selected compliance team in ZTE and the suspended 10-year ban effectively keeps ZTE on a tight leash. ZTE would be forced to comply with trade rules or risk going out of business permanently when the ban is reactivated. Also, American companies can resume supplying ZTE and are no longer “punished” by the Chinese company’s violations (American economic prosperity is a pillar of the Trump NSS).

The ZTE case would also serve as a stern warning to other Chinese companies like Huawei who have violated U.S. law or are currently behaving irresponsibly. The fear of being handled like ZTE would compel other Chinese companies to “learn” to follow the rules and play fair. Extreme law enforcement action, and not letting China off the hook, may prove to be the solution to reining in noncompliance and bad behavior.

The new ZTE deal hands Xi Jinping a political lifeline (see next section for details), and allows him to focus on driving China’s economic reform and opening up measures. And should Xi succeed with his reforms and make the necessary structural changes to the Chinese economy, America can pursue “fair and reciprocal relationships” with China that “benefit all with equal levels of market access and opportunities for economic growth” in the future. Perhaps U.S. Secretary of State Mike Pompeo best understands Xi’s potential for America and the world. In an interview with Bloomberg when he was CIA Director, Pompeo said that Xi has “incredible capacity to do good around the world” if he consolidates power more fully at the 19th Party Congress in August 2017. And according to a recent report by the Financial Times, Pompeo “is worried that the chaotic approach the US team is taking towards the China trade issue could annoy Xi Jinping” and adversely affect the coming Singapore summit between Trump and Kim Jong Un.

The ZTE issue has been posing tricky problems for the Chinese Communist Party (CCP) in the spheres of politics and propaganda. For instance, the CCP propaganda apparatus has struggled mightily in boasting about China’s high-tech dominance under Xi Jinping’s “new era” since ZTE suspended its major operations. The U.S. Commerce Department’s new ZTE deal thus ensures that America has “kryptonite” near the CCP for at least a decade. To be free from U.S. compliance, ZTE would have to either wait 10 years or develop advanced chips and software within that time frame to replace the American components and services it has come to rely on in manufacturing its products. And the CCP might not be too keen on investing huge resources into a company that is under the watchful eye of America. But if the seven-year ban is retained and ZTE collapses, then the CCP would be “released” from the political and propaganda restraints brought about by a ZTE in trouble, and America would no longer have “kryptonite” to rein in the CCP. A collapsed ZTE would present the CCP with a golden opportunity to fan the flames of hatred against America among the Chinese populace, most of whom would not be told the real reason for the U.S. ban due to CCP censorship. Xi Jinping’s rivals would also use ZTE’s fall as reason to oust him and bring back the old and corrupt order. Ultimately, the collapse of ZTE may be a lost for the Chinese regime, but the CCP would be able to use the lost to strengthen its grip over China and set Sino-U.S. relations on an antagonistic path.

China
The embedded U.S. compliance team in ZTE would give the CCP much psychological stress and present all sorts of headaches for CCP propagandists. But for the CCP propaganda apparatus, the problems of selling the new ZTE deal should pale in comparison to explaining to the public why a “national champion” collapsed ignominiously.

Having secured ZTE’s survival, Xi should be able to maintain his authority in the CCP and beat back mounting pressure from political rivals. When his authority is unquestioned, Xi would be able to push through economic reforms more effectively and liberalize China’s economy. In other words, Xi can see that the structural changes and intellectual property protection that Trump administration officials are asking of their Chinese counterparts are successfully implemented. Of course, the CCP would pass off all reform and opening up measures as self-initiated efforts, and not concessions made under U.S. pressure. The CCP would also continue to use its customary “tough” language in subsequent trade disputes with America.

What’s next:
1) If the Trump-Kim meeting in Singapore bears fruit, China and the U.S. should suspend tariffs and postpone the trade war.

2) In the coming months, China could announce unprecedented measures to open up its economy.