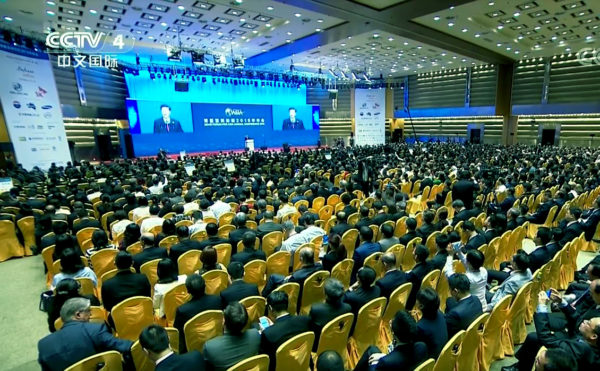 Why Xi Jinping Will Open Up China This Time

◎ Xi could fulfill his Boao promise to open up China.

Speaking at the Boao Forum for Asia on April 10, Xi Jinping pledged to further liberalize China’s economy. “China’s door of opening up will not be closed and will only open wider,” he said.

Highlights from Xi’s speech include:

The backdrop:
Xi’s Boao speech comes after a tit-for-tat tariff standoff between the United States and China, and North Korean leader Kim Jong Un pledging to denuclearize the Korean Peninsula during a recent trip to Beijing. Kim is also prepared to discuss denuclearization when he meets with President Donald Trump in May or early June, according to U.S. officials.

Our take:
There is much skepticism that Xi Jinping would follow through on his pledge to further open up the economy. In view of China’s economic woes, new Sino-U.S. relations, and the present state of elite Chinese Communist Party (CCP) politics, we believe that Xi will fulfill his Boao promise.

1. Gradual economic liberalization appears to be Xi’s only option because China’s financial sector is in bad shape. A clue that the situation is dire can be spotted in official rhetoric. In recent public speeches and interviews, top Chinese financial officials warned about the dangers of Black Swans, Gray Rhinos, Minsky Moments, and the 2008 global financial crash.

To mitigate major risks, the Xi administration has been taking stringent measures to regulate the banking, securities, and insurance industries since 2017. Record fines were collected, and top insurers like Anbang’s Wu Xiaohui were arrested for financial crimes. Expect Xi to continue with his deleveraging campaign until China’s risks are more manageable.

Financial risks are not the only thing worrying Xi. China’s economy has been slowing down for years, leading to rising fiscal deficits, lower employment in the manufacturing industries, and a withdrawal of foreign investments. With a trade war with the U.S. looming and China standing to lose big from imposing tariffs on essential imports like soybeans, Xi must feel that he has no choice but to open up the economy further to attract foreign funds back to the mainland and soften the impact of U.S. tariffs.

2. Trump has shown thus far that he will get tough with China on trade and intellectual property issues as promised on the campaign trail.

Beijing now potentially faces tariffs of $150 billion on over 1,300 products, including goods that are part of its “Made in China 2025” program. Meanwhile, trade talks between U.S. and China appear to be making little headway as Trump administration, which is staffed with China hawks, exercise caution with taking Beijing’s financial pledges at face value. “We can’t just trust. We need to verify and we need to make sure that if we do get into a negotiation situation where China is making commitments, they have to be commitments that we know that they’re going to follow through on,” an administration official told Reuters.

Trump may send out kind tweets about Xi’s reform moves, but expect his administration to engage Beijing warily. Meanwhile, the Xi administration must know by now that they are dealing with a U.S. president who, unlike his predecessors, is clear about the CCP threat to national security and recognizes the CCP as a strategic competitor. To weaken U.S. pressure and buy time to focus on domestic deleveraging to preserve his rule, Xi would see making concessions via opening up China as the best worst option.

3. Unlike during his first term, Xi Jinping now has sufficient political strength to enact reforms and open up the economy.

In 2013, the Xi administration unveiled an ambitious reform plan that included measures like opening up market access, setting up free-trade zones, and allowing the markets to play a “decisive role” in the economy. But the administration was largely unable to follow through because the Jiang Zemin faction, which rivals the Xi camp, was still very influential. For example, premier Li Keqiang was reported to have slammed his fist on his desk in frustration when local Shanghai officials (Shanghai is the base of the Jiang faction) repeatedly stymied his plans for the Shanghai Free-Trade Zone. Jiang faction associates were also involved in worsening the 2015 financial turbulence in China. Anti-corruption officials chastised purged officials for being “lazy and indolent” while a prominent Chinese scholar remarked that officials were showing “passive resistance” (“bu zuo wei”) to the Xi administration.

The state of affairs in elite CCP politics is very different in 2018. Xi purged many Jiang elites and lower ranking supporters with his grinding anti-corruption campaign, and firmed up his control over the military through instituting sweeping reforms. In 2016 and 2017, Xi took on highly symbolic trappings of power (“core” leader, “Xi Jinping Thought”) and installed his loyalists in many key Party and state positions at the 19th Party Congress and the Two Sessions. Finally, Xi “blindsided” his rivals and officials who have yet to align themselves with his agenda by naming top ally Wang Qishan as vice president and dropping the term limits for Chinese vice president and president.

Perhaps the best indicator of Xi’s present political clout is Kim Jong Un visiting Beijing and humbling himself before Xi. The Trump administration’s “maximum pressure” undoubtedly played a significant role in bringing Kim to the diplomatic table, but it is likely that the strategy would be less successful if Kim felt that the Jiang faction could still be relied on, or if Xi wasn’t powerful enough to convince Chinese officials to obey his orders. Indeed, Hu Jintao was reduced to a figurehead during his tenure precisely because the Jiang faction was very powerful and had massive influence over the Chinese officialdom.

Xi, however, is not entirely in the clear politically. Jiang faction elements and Party princelings are still at large in China’s financial sector. The “halfway” shift to a “bank plus two commissions” regulatory model and the unusual appointment of Yi Gang as central bank chief and Guo Shuqing as central bank Party secretary are revealing of severe problems in the banking and insurance industries. Depending on the seriousness of the financial sector problems and the intensity of the regulatory campaign, the Xi administration could take longer than expected to fulfill Xi’s Boao pledge to open up China’s economy further.