◎ The prosecution of Wu Xiaohui is a classic “kill chickens to scare monkeys” move by the Xi administration.

On Feb. 23, the China Insurance Regulatory Commission (CIRC) said in a statement that Anbang Group chairman and general manager Wu Xiaohui had been prosecuted for “economic crime.”

The statement added that a 31-member working group headed by CIRC official He Xiaofeng will oversee Anbang for a year as of Feb. 23, 2018. Members of the group include regulators from the CIRC, the People’s Bank of China, the banking and securities regulatory commission, and the foreign exchange agencies.

The statement also said that the Shanghai Municipal People’s Procuratorate had started a prosecution case against Wu on charges of fraud and embezzlement.

1. On the morning of June 14, 2017, Anbang said in a statement on its official website that Wu Xiaohui was unable to perform his duties due to personal reasons. In fact, Wu had been placed under investigation.

2. On Aug. 22, 2017, the Supreme People’s Procuratorate noted in its circular on “implementing the spirit” of the July National Financial Work Conference that troublemaking “financial crocodiles” should be resolutely investigated and dealt with.

3. On Jan. 17, 2018, Guo Shuqing, the head of the China Banking Regulatory Commission, told Party mouthpiece People’s Daily in an interview that, “a few lawbreakers used complex structures, phony investments, and circular capital injection to establish illegal large financial groups. These lawbreakers have become a serious impediment to the deepening of reforms and safeguarding the banking system, and must be severely dealt with according to law.” (Link)

1. In our Jan. 17 article, we wrote that the financial operations of big Chinese conglomerates like Wu Xiaohui’s Anbang Group are a threat to Chinese Communist Party regime. We added that the Xi Jinping administration “will not be lenient in cracking down on influential businessmen who are found guilty of compounding China’s financial risks.”

2. The prosecution of Wu Xiaohui is a classic “kill chickens to scare monkeys” move by the Xi administration. Xi is sending a stern warning to Party princelings not to do anything foolish while Beijing strives to resolve the build-up of financial risks and sidestep the potential Black Swans or Gray Rhinos as mentioned by top banking regulator Guo Shuqing.

3. In considering another perspective, the Xi administration’s heavy-handed approach to reining in Anbang suggests that China’s financial risks are so perilous to the CCP regime that it is willing to sacrifice Party princelings to fix the problem.

There are many prominent Party princelings in finance, and they have been known to leverage on their political and business connections to reap a fortune. For instance, Alvin Jiang (Jiang Zhicheng), the grandson of Jiang Zemin, invested in Alibaba Group through his private equity firm Boyu Capital, and made high returns after Alibaba went public on the New York Stock Exchange. Meanwhile, Wu Xiaohui, the former grandson-in-law of Deng Xiaoping, and his Anbang Group are known to launder funds on behalf of the Jiang clan. 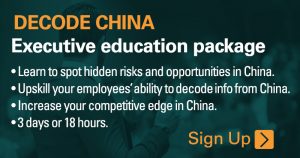