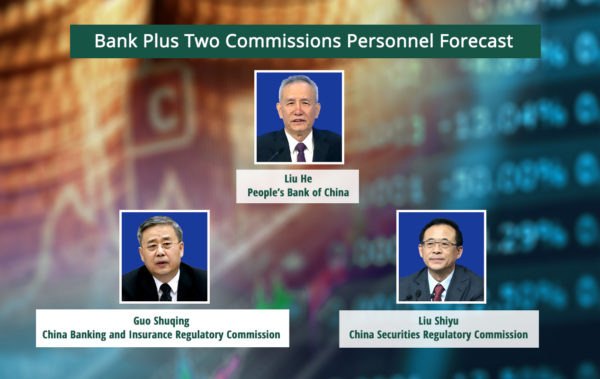 ◎ The Xi Jinping administration’s adoption of a CB2C model reveals three things about the overall situation in China.

According to a reorganization plan deliberated by the 13th National People’s Congress (NPC) on March 13, several State Council institutions would be dissolved or merged. One such merger is that of the banking and insurance regulators into a single entity, the China Banking and Insurance Regulatory Commission (CBIRC).

The Xi Jinping administration’s adoption of a CB2C model reveals three things about the overall situation in China:

3. The model adopted is only a temporary, incremental reform that fails to fully resolve the problem of supervising a financial sector where businesses run mixed operations.

We’ll examine the merger of the banking and insurance regulators from the perspective of elite Chinese politics and factional struggle.

In early February, we analyzed that Xi may shift the CB3C to a “bank plus one commission” due to factional struggle (neidou) considerations (Link). After media outlets started reporting that new Politburo member Liu He may be selected as the next central bank chief, we gave our take on Liu’s suitability for the job (Link). A brief recap follows.

We reasoned that top banking regulator Guo Shuqing is best suited to run the PBoC because he has experience in formulating macro policy, has worked in the central bank and helmed state-owned banks, and has experience handling local debt problems in the provinces. Further, Guo has proven to be an exceptionally tough banking regulator since taking over as CBRC director in February 2017.

In contrast, Liu He has no experience in provincial government, but has the theoretical know-how to formulate macro policy. His lack of on-the-ground experience may see him struggle to tackle the financial problems that the PBoC president has to deal with. Liu, in short, is not the best candidate that Xi can field for the position.

Yet in the lead up to the Two Sessions, rumors of Liu He taking over Zhou Xiaochuan as central bank chief has been circulating alongside speculation that the banking and insurance regulators would merge. The announcement of the new CBIRC and the emergence of the CB2C model suggests that Liu may indeed be appointed as the new PBoC president.

In accounting for the effect of CCP factional struggle in determining personnel movement, there is indeed a very good chance that Liu He, a trusted ally of Xi, will end up running the central bank. But it is difficult to imagine that Liu will head the PBoC for an extended period. Already, he has to perform the duties of a State Council vice premier in charge of finance, Sino-U.S. trade issues, and helm the Financial Stability Development Committee oversight body. And the job of PBoC president is very demanding.

An interim measure for challenging times

Should the personnel arrangement described above be finalized, it is an indicator that China faces immense risks and Xi Jinping lacks capable and trusted officials to place in key financial positions. Three developments prove this:

2. Guo Shuqing has been doing well thus far in stringently regulating the banking sector. However, China’s banking situation may be so dire that Xi cannot afford to move him away at the moment and adopt a CB1C structure with Guo heading the central bank and Liu Shiyu handling a “super regulator.”

If Xi still plans to eventually shift China towards a “bank plus one commission” system, then the creation of the CBIRC is definitely a step in that direction. For one, it is easier to merge the banking and insurance regulators first due to the similarities in regulatory concepts, rules, and tools. On the other hands, the securities regulator is involved in duties like protecting investors and authenticating information disclosure to prevent fraud. Creating a “super regulator” when things are not fully under control could end up being counterproductive.

3. Having two separate regulators instead of one “super regulator” may prove to be more beneficial to the Xi administration’s deleveraging and de-risking campaign at this stage. When liquidity is tight, the securities regulator needs to focus on arranging for top companies to get listed in mainland markets to attract funding into the stock markets and jumpstart the capital market.

For instance, the CSRC facilitated Foxconn’s listing on the Shanghai Stock Exchange. Foxconn Industrial Internet Co. Ltd., a subsidiary of Foxconn, secured an IPO only 36 days after the CSRC issued its prospectus.

On March 15, CSRC deputy director Yan Qingmin said in an interview that Chinese Depositary Receipts (CDR) would soon go on sale. The receipts will represent “new economy” firms (AI, industrial internet enterprises, etc.)  and “unicorns” (privately owned companies not more than 10 years old and worth $1 billion). In early March, some news outlets reported that the CSRC was looking to allow big Chinese tech companies that are listed overseas to get listed and traded in the A-shares market via issuing CDRs.

From the three points and examples above, it makes sense for Xi Jinping to retain Liu Shiyu as securities regulator head and task Guo Shuqing with overseeing banking and insurance regulation. China’s financial situation may very possibly be bleaker than what the world imagines, and Xi is probably wary about picking less loyal officials to helm the regulatory commissions. So Guo has been trusted with running the deleveraging and de-risking drive in the banking and insurance sector, while Liu can focus on attracting funding and capital into the markets to prevent a credit crunch and debt crisis from developing.

With Guo Shuqing and Liu Shiyu tied up, Xi Jinping can only rely on Liu He to head the central bank. Liu He will also likely serve as a placeholder for Guo or other trusted allies of Xi because Xi will avoid appointing veteran PBoC executives who rose up the ranks during the Jiang Zemin era (practically all the current top central banks deputies).

In sum, we believe that two key considerations went into Xi’s decision to adopt a “bank plus two commissions” system, namely, the CCP factional struggle and the serious financial risks China faces. If our assessment of the situation is accurate, then the new regulatory system is only an interim measure that will make way for a more permanent arrangement at a later date. Xi could move towards a “bank and commission” set up when risks have lessened to an acceptable level, and the Jiang faction elements in the financial sector have been largely cleaned out.