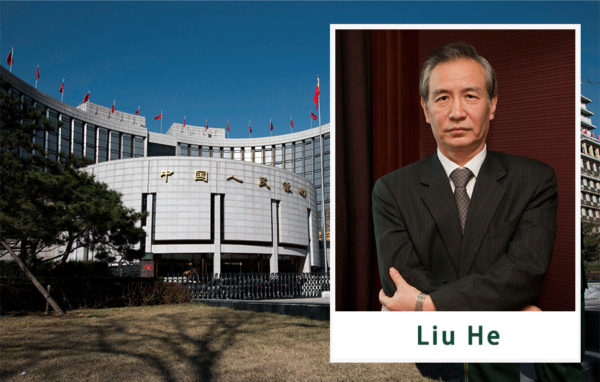 Is Liu He the Next China Central Bank Chief?

◎ Liu as PBoC president is a little off in considering the norms of official ranking.

Near the end of February, several media outlets reported that Liu He, a Politburo member and director of the Leading Group for Financial and Economic Affairs, will be appointed vice premier in charge of finance and the next president of the People’s Bank of China (PBoC).

We anticipated Liu’s entry into the Politburo before the 19th Party Congress, and later predicted that he would succeed Ma Kai as vice premier overseeing finance. We also analyzed that Liu will replace Ma as director of the Financial Stability Development Committee.

As for the position of PBoC president, we believe that China Banking Regulatory Commission head Guo Shuqing will replace the long-serving Zhou Xiaochuan when he retires. We continue to hold that view.

Some of the reports and analysis of Liu He being the “frontrunner” for the top central bank job while concurrently service as vice premier suggest that there is precedent in the case of Zhu Rongji.

In March 1993, Zhu was appointed State Council Vice Premier, and three months later, he became PBoC president. Zhu held both positions for two years, and during that period, he pushed through taxation, financial, investment, enterprise, housing and pricing reforms. For instance, Zhu championed a tax-sharing system to channel the bulk of tax revenue to Beijing and reverse the draining of funds from the central authorities to the provinces. Zhu also halted banks from becoming personal “ATMs” for officials and state enterprise businessmen, saw the establishment of policy banks to undertake policy loans, professionalized the banking sector, and modernized China’s banking system. Finally, Zhu rationalized China’s foreign exchange regulations and scrapped the earlier dual-track system, reforms that diminished the ability for officials to abuse their position for financial benefit.

Zhu Rongji was appointed to key financial positions because he supported Deng Xiaoping’s push to liberalize the economy. Deng’s “reform and opening up” drive was in danger of grinding to a halt after the international community heavily sanctioned China in the wake of the 1989 Tiananmen Square Massacre. Further, left-leaning Party elders and Jiang Zemin were not in favor of continuing Deng’s economic reforms. Zhu Rongji, however, was a proponent of economic reform, and his work in developing Shanghai’s Pudong district caught Deng’s attention and paved the way to his becoming vice premier and central bank president in 1993.

Zhu hadn’t worked in China’s banking system before taking over as central bank chief, but he had spent four years as Shanghai mayor (1987 to 1991). His experience in the financial hub of Shanghai would have given him first-hand knowledge and insights into China’s financial and economic operations, and very possibly allowed him to achieve what he achieved as PBoC president. In other words, Zhu’s career background was most definitely a factor in his appointment.

If Liu He is indeed Xi Jinping’s choice for central bank chief, then somebody hasn’t been doing their homework. Liu has a masters in public administration from Harvard and spent the bulk of his official career in various policy groups (National Development and Reform Commission, Central Financial Work Leading Group Office, etc.). However, Liu has no experience in provincial government. In other words, Liu has the theoretical know-how to craft monetary policy, but it is questionable if he can push through Zhu Rongji-level reforms with his lack of on-the-ground experience.

Conversely, top banking regulator Guo Shuqing has both experience working in provincial government and the banking system. From the late 1980s to early 1990s, Guo worked in the State Commission for Restructuring the Economy and the National Development and Reform Commission. In 1998, he became vice-governor of Guizhou Province and PBoC vice president, and held both positions until 2001. Later, Guo held top positions in the State Administration of Foreign Exchange, China Construction Bank, and the China Securities Regulatory Commission. After Xi Jinping took office, Guo was appointed deputy Party secretary and acting governor of Shandong Province in 2013, and was tasked with fixing the province’s debt crisis. In 2017, Guo was picked to head China’s banking regulatory commission, and has since handed out record fines and very stringent regulations. Guo’s iron-fisted handling of the banking sector and his wealth of experience in banking and provincial government gives him a distinct edge over Liu He in advancing monetary and banking reform as central bank president.

Liu as PBoC president is also a little off in considering the norms of official ranking. The office of State Council vice premier is a deputy national-level post, while the central bank chief, a ministerial-level role, is one step down. On paper, Liu shouldn’t be running the central bank if he is vice premier. But of course, there is the precedent of Zhu Rongji. We believe that if Liu does become vice premier and PBoC president, it will only be for a provisional term like Zhu.

Liu as provisional PBoC chief makes sense in the scenario where the Xi Jinping administration is experiencing stiff resistance or other difficulties in reforming China’s financial oversight system. During the 19th Party Congress, Xi spoke about implementing major reforms, and the topic of economic and political reforms was deliberated at the recently ended Third Plenum (Feb. 26 to Feb. 28). We previously analyzed that the Xi administration may be shifting away from a “central bank and three commissions” regulatory structure to a “central bank plus one commission” structure. But if opposition to this move is immense or Xi is unable to complete preparations for the reorganization by the Two Sessions, then Guo Shuqing could very well stay on as banking regulator head while Liu He handles the central bank in the interim.

We believe that our analysis of China’s financial regulatory structure reform and personnel movement holds if no official is picked as chairman of the insurance regulator, a post that has been vacant for over half a year. Also, the foundation for future political and economic reform would have been laid at the Third Plenum, and reforms will begin to be implemented after the Two Sessions. If a Fourth Plenum is held near the end of the year, expect even more significant reforms to be announced.