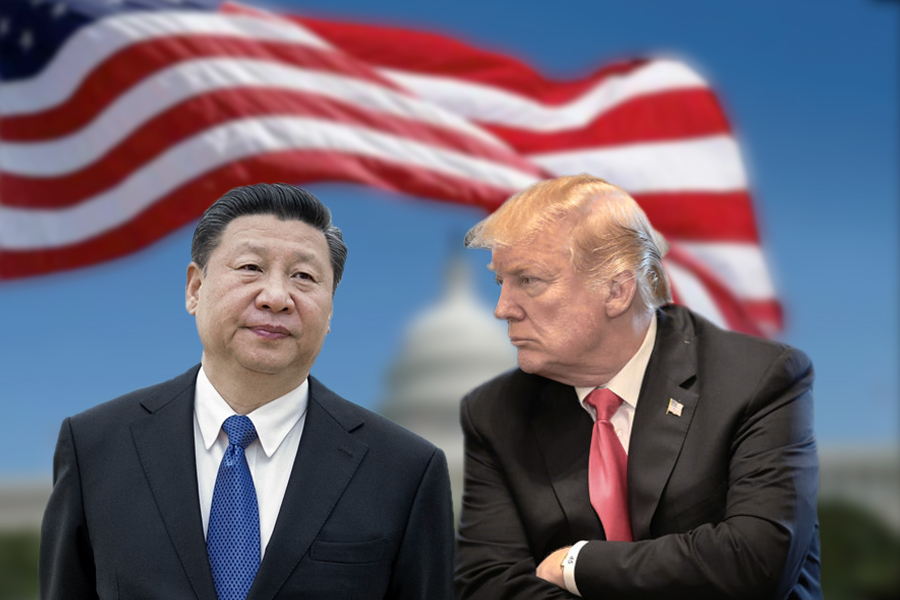 ◎ We believe that a full-blown Sino-U.S. trade war is the catalyst that would set China on the path of tremendous change.

United States President Donald Trump stepped up a trade conflict with China on June 19 by asking his administration to identify $200 billion worth of China goods to be penalized with tariffs at a rate of 10 percent. Trump’s move was a response to China announcing retaliatory duties to an earlier list of U.S. tariffs worth $50 billion.

In a statement, Trump said that China’s retaliatory tariffs “clearly indicates its determination to keep the United States at a permanent and unfair disadvantage.” He added that the U.S. would pursue additional tariffs on $200 billion of goods if China raises tariffs again.

White House trade adviser Peter Navarro said in a reporter’s conference call that “President Trump has given China every chance to change its aggressive behavior,” and “China does have much more to lose than we do.” He added, “The fundamental reality is, talk is cheap. Delay is expensive.”

China’s Commerce Ministry said that China would be “forced to adopt comprehensive measures combining quantity and quality to create a strong countermeasure” to the U.S. tariffs.

Global markets convulsed a day after Trump announced the tariffs, with the Shanghai Composite Index falling 3.8 percent and the Dow Jones Industrial Average by 1.5 percent.

The announcement also comes as the Trump administration’s pro-business policies, deregulation, and tax cuts have contributed to the U.S. economy doing very well. The unemployment rate hit an 18-year low of 3.8 percent, and the U.S. Federal Reserve raised interest rates to 2 percent on June 13. The Fed plans to raise rates four times this year, and projects a 2.8 percent GDP growth for 2018.

Meanwhile, signs that the Chinese economy is doing poorly continue to surface. Local government and corporate debt continue to soar, and the first half of 2018 saw a wave of bond defaults. Starting April, local governments started falling behind in paying civil servants, resulting in small-scale protests by school teachers and state television employees. China’s debt crisis is compounded by the Xi Jinping administration’s deleveraging campaign, which has tightened liquidity in China. While China’s central bank sought to inject liquidity via a 463 billion yuan ($72.43 billion) 1-year medium-term lending facility (MLF), the fact that “junk” bonds are being used as MLF collateral threatens to lower the creditworthiness of the renminbi and devalue the currency.

Our take:
President Trump did not issue a deadline for the implementation of fresh tariffs on Chinese goods. The new list would also have to undergo a review period before they are imposed. China is expected to negotiate, and anything could happen until the tariffs are a reality. Trump’s tariff threat, however, is more or less a declaration of trade war with China.

We believe that a full-blown Sino-U.S. trade war is the catalyst that would set China on the path of tremendous economic, social, and political change. Change does not necessarily mean upheaval and chaos in China. But political risk in both China and the U.S. would increase substantially as Trump and Xi Jinping cope with the fallout of a trade conflict.

The U.S.
Trump’s call for additional tariffs on Chinese goods is consistent with his stance on trade and China. From the campaign trail to the White House, Trump has been very steady in demanding tough action against China’s trade policies and intellectual property theft. And Trump’s National Security Strategy states that U.S. trade relationships with other countries should be based on “fairness and reciprocity.” There may be further trade talks between China and the U.S., but it appears that unless the Chinese Communist Party (CCP) is able to pledge and make tangible concessions upfront, China is looking at a potential $450 billion worth of tariffs (the CCP’s political culture dictates retaliation; see “China” section) and an all-out trade war.

Given the terrible shape of the Chinese economy, the U.S. would win a trade war with China unless the Xi Jinping administration makes structural changes to China’s economy. Such changes would entail political change, including the collapse of the CCP. But as long as the CCP is in power, the Trump administration must account for the Party’s non-economic retaliation to America’s economic strategy. For instance, the CCP could escalate tensions in the South China Sea and over Taiwan; use its influence over North Korea to inject uncertainty into its denuclearization process; and mobilize its propaganda apparatus to incite hatred against the U.S. amongst the Chinese populace in the mainland and elsewhere.

The Trump administration must be prepared militarily to preserve the status quo in the South China Sea, protect Taiwan’s interests, and counter CCP propaganda and disinformation to defuse or mitigate social tensions at home and abroad.

China
We believe that the CCP would be the biggest loser in a Sino-U.S. trade war.

We wrote in previous articles that regime survival is paramount for authoritarian parties like the CCP. And the CCP would do anything and say anything (even self-contradictory statements and actions) to ensure survival, including offering major economic concessions to delay a trade war and selling the concessions as a “win-win” victory for China and the U.S. However, the CCP cannot be seen to lose face because its political culture ties face with political legitimacy. This means that the CCP’s propaganda apparatus is forced by its version of “political correctness” to project toughness even when economic realities mean that toughness is tantamount to diplomatic suicide. Also, the CCP is particularly vulnerable to economic problems because it has linked its legitimacy with economic prosperity since Deng Xiaoping was paramount leader.

Whether Trump knows it or not, his tariff threat is a triple blow to the CCP’s vital points. First, the tariffs and the manner in which it was announced do not give face to China. Second, when imposed, the tariffs would seriously threaten the Chinese regime’s economic survival. Finally, the CCP’s propaganda apparatus has lost control of the narrative on trade. State media defense of China’s trade concessions during the three rounds of Sino-U.S. talks had already turned the CCP into the laughing stock of the Chinese internet. For example, Chinese netizens mocked the CCP’s insistence that China plans to import more goods from the U.S. (a concession) because it placed the people’s well-being first by questioning why the CCP never pursued this policy before the Sino-U.S. trade talks. And despite being perceived by the Chinese people to have made concessions to the U.S., the CCP managed to provoke an escalation of the trade conflict. In other words, the CCP is facing a severe diplomatic, propaganda, political, economic, and social crisis due to its failure to correctly read the Trump administration. Meanwhile, the Xi Jinping administration would come under immense pressure and criticism from political rivals, and CCP factional struggles would become more vigorous.

Extreme circumstances call for extreme action. To handle the multiple crises and preserve CCP rule, the Xi Jinping administration has two options—lockdown or open up. Neither option bodes well for the CCP.

In a lockdown, Beijing could attempt to cut China off from the world as it strives to mitigate financial problems associated with its connection to the global economy and finance. The CCP would impose extreme security measures and greatly tighten its control over society. The attendance of Central Military Commission members and People’s Armed Police officials at China’s National Financial Work Conference in July 2017 and the Central Economic Work Conference in December 2017 shows that the CCP treats economic issues very seriously, and hints at the potential of a lockdown scenario. The probability of lockdown increases if Xi is ousted by political rivals and Party hardliners. However, we are not optimistic that China would see a lockdown and revert back to the Cultural Revolution days because the country is too interconnected with the world. Also, even if Party hardliners succeed, they are at considerable risk of being evicted in a popular revolt, and the CCP would almost certainly be cast aside.

Presently, Xi Jinping appears to be sticking to the path of opening up China. Premier Li Keqiang and the State Council have been announcing reform after reform following the third round of Sino-U.S. trade discussions, and Hainan is being prepped as a testbed for China’s economic liberalization. While opening up is the best solution to resolving trade tensions with America (Trump wants reciprocity), the Xi administration would encounter stiff pushback from various Party factions, interest groups, the Chinese officialdom, and even from Chinese society (especially when the Chinese “Great Firewall” becomes less censored). To counter dissent, Xi would have to tighten control over society, increase security measures, and escalate the anti-corruption campaign to the middle-to-lower level official ranks. Given the extent of corruption in the officialdom, the anti-corruption campaign could also serve to somewhat replenish the regime’s coffers.

If Xi feels that he cannot cope with opposing factions, he could even arrest “untouchable” elite CCP elders like Zeng Qinghong and Jiang Zemin, and hold them accountable for China’s economic woes. Given that the Trump administration is starting to push the CCP on human rights violations, Jiang could even be prosecuted for the persecution of Falun Gong, which includes organ crimes. In 2016, the U.S. House of Representatives passed legislation condemning the CCP for overseeing the live organ harvesting of prisoners of conscience, most of whom are Falun Gong adherents. Should Jiang and other CCP elites be prosecuted for violating human rights and the CCP’s atrocities be laid bare, then Xi Jinping would come under enormous pressure to denounce and disband the CCP.

During the opening up phase, the reformers would individually be at very high political risk. The reformers, however, could survive the CCP’s demise for helping to bring about that outcome.

Get smart:
As change unfolds in China, foreign investors must account for political risk in their business decisions.