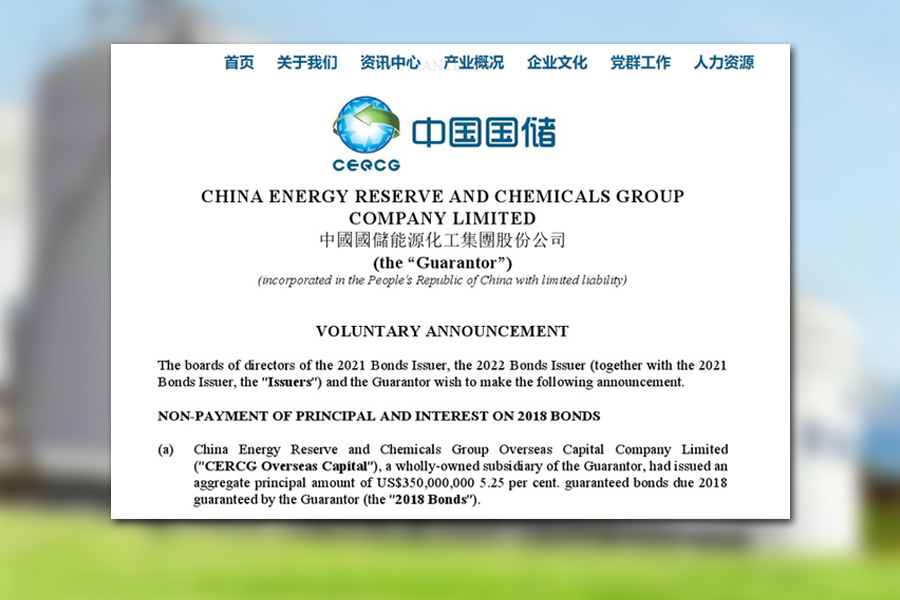 On May 29, the state-owned China Energy Reserve and Chemicals Group (CERCG) announced that one of its subsidiaries was defaulting on a $350 million three-year bond that matured earlier this month. CERCG said that the missed payment also triggered $655 million in other debt securities that are due to mature in 2021 ($400 million) and 2022 ($255 million).

The conglomerate blamed a “tightening in credit conditions” in China over the past two years for restricting its access to bank loans and onshore bond issues. CERCG plans to divest some assets to resolve its liquidity problems.

The backdrop:
1. CERCG is a conglomerate that carries out energy exploration, development, storage, transportation, and energy and chemical work. It has over 30 wholly-owned and holding companies in China and abroad. The Beijing Municipal government holds about 30 percent of CERCG shares (under the name of the Beijing Municipal Commission of Commerce), while PetroChina owns 26.85 percent. The Chinese Communist Party (CCP) International Liaison Department and six other ministries and enterprises also have a stake in CERCG.

2. In November 2017, CERCG grabbed headlines when one of its subsidiaries agreed to pay $5.2 billion to buy The Center, a Hong Kong skyscraper owned by billionaire Li Ka-shing. However, CERCG later backed out of the deal this year.

The big picture:
There has been a wave of bond defaults this year, while new bonds are struggling to find takers. As of May 21, a total of 18 bonds worth 15.9 billion yuan ($2.48 billion) have defaulted. Meanwhile, “AA+” rated private companies and “AA” rated state-owned companies have found it difficult to issue bonds for an extended period.

Our take:
1. Beijing’s deleveraging campaign has already triggered a debt crisis in China. Companies are in crisis because the long-standing business model of taking on heavy debts and issuing fresh bonds to repay old debts is no longer effective with deleveraging measures in place.

2. CERCG defaulting sends a different signal from the defaulting of private Chinese companies. CERCG is a large state-owned enterprise with wealthy shareholders and is supported by national policies. It should not be facing liquidity problems, especially not when domestic oil prices are perpetually rising and when $350 million amounts to only about 2.25 billion yuan.

3. We believe that the problem lies not with CERCG’s lack of financing, but rather China’s lack of foreign exchange reserves. The massive capital outflows in recent years could have resulted in a shortage of U.S. dollars.

According to U.S. Treasury Department data, the total amount of U.S. debt held by China in March reached $1.188 trillion, the highest since October 2017. After deducting U.S. Treasury bonds, China’s dollar reserves would be approximately $700 billion to $1 trillion.

Another factor to consider is U.S. Treasury bonds. Bond yield exceeded 3 percent this year, and because the price of Treasury bonds is inversely proportional to the yield, the price of bond futures is lowered. This phenomenon weakens the liquidity of U.S. dollars in China’s foreign reserves.

4. Given the current situation, China’s ability to generate foreign reserves would be weakened further should the U.S. impose tariffs on China. Thus, we believe that China would not wage a trade war with America even if it ends up imposing tariffs on Chinese imports. Beijing would only move to open up its markets further and attract foreign investment.