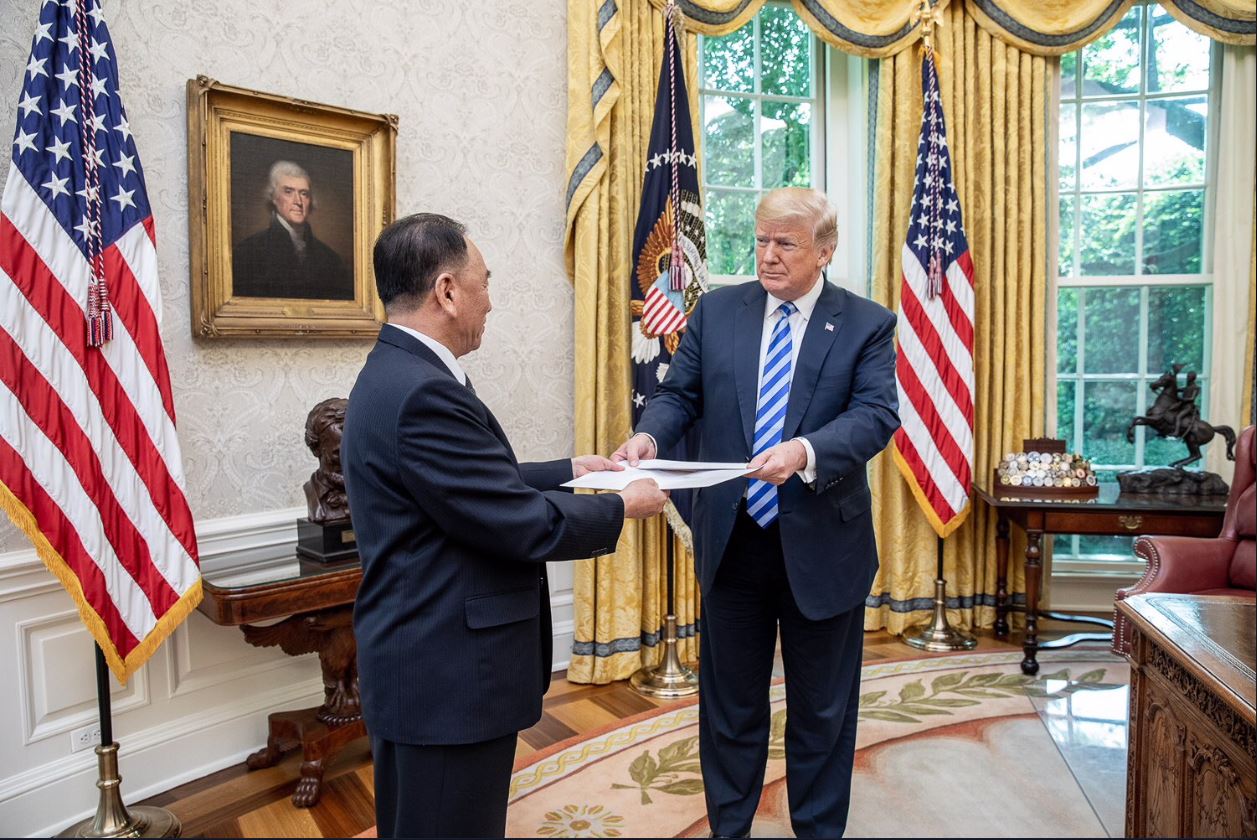 ◎ The Democrats’ demands may end up helping Trump to seal a historic denuclearization and peace deal with Kim Jong Un.

In a letter to United States President Donald Trump, Senate Democratic Leader Chuck Schumer and other top Senate Democrats listed five demands that North Korea must meet before they would approve the lifting of sanctions on Pyongyang.

The demands include:
1) Dismantle or remove every single one of North Korea’s nuclear, chemical, and biological weapons;

5) North Korea’s actions to denuclearize and dismantle ballistic missiles and programs must be permanent.

The letter, which was sent on June 4, also urged Trump to “maintain a tough approach to China” and see that it “will do all it can to help secure an agreement and then insist on strict North Korean compliance with such an agreement.”

Trump needs support from the Democrats to pass legislation in the 100-seat Senate since most legislation requires 60 votes to pass and Republicans only hold 51 seats.

The big picture:
The letter from top Senate Democrats comes as Trump prepares for a summit with North Korean leader Kim Jong Un in Singapore on June 12. The Singapore summit was briefly in doubt when Trump canceled it on May 24 in the wake of North Korea’s threats to withdraw in mid-May. However, U.S. and North Korean officials continued to hold preparatory talks in Singapore, North Korea, and America. On June 1, Trump confirmed that the meeting would take place as originally planned.

The Democrats have been blocking Trump on policy and personnel appointments since he came to office in 2017. In a weekly address on June 2, Trump said that over 300 of his nominees are still awaiting confirmation.

Meanwhile, Sino-U.S. trade talks appear to have reached an impasse. China unilaterally released a statement after the third round of discussions in Beijing from June 2 to June 3, while the Trump administration has stayed silent at the time of writing. According to The Wall Street Journal, China offered at the Beijing talks to buy nearly $70 billion worth of U.S. agriculture and energy products if the Trump administration does not proceed with planned tariffs. State Council vice premier Liu He told U.S. Commerce Secretary Wilbur Ross that the deal would be void if the U.S. imposes $50 billion of tariffs on Chinese goods after a list is released by June 15. U.S. officials remain skeptical of the deal, and nothing has been signed yet according to the Journal. While the Trump administration is looking to greatly reduce America’s trade deficit with China, it ultimately wants China to commit to making structural changes to its economy, guarantee intellectual property protection, and end the practice of forced technology transfers.

Our take:
The Senate Democrats’ list of demands appears to add a further complication to the Trump administration’s denuclearization negotiations with North Korea. Conventional wisdom suggests that the stringent demands would almost certainly torpedo Trump’s diplomatic effort. Given prior and ongoing Democrat obstruction, it cannot be ruled out that the release of the demands close to the Singapore summit is an attempt to set Trump up for failure with North Korea.

Based on our reading of the situation, however, we believe that the Democrats’ demands may end up helping Trump to seal a historic denuclearization and peace deal with Kim Jong Un. An examination of the issue from the perspective of the interests of the three major players in the North Korean crisis follows.

The U.S.
Trump and top officials in his administration have repeatedly said that they want North Korea’s denuclearization to be complete, verifiable, and irreversible (CVID). And until Pyongyang commits to CVID, the “maximum pressure” campaign against North Korea would not be lifted. White House National Security Advisor John Bolton said in a television interview in May that the U.S. would also talk to North Korea about giving up its ballistic missile program, as well as chemical and biological weapons. To date, there is no indication that the Trump administration is backtracking from its denuclearization demands.

Meanwhile, the mainstream view of Trump on North Korea is that he may cut any deal with the North Koreans to win the Nobel Peace Prize. The Senate Democrats’ demands seem to reflect those mainstream “concerns,” but in reality they are not asking for Trump to do anything more than what his administration has already said publicly. In other words, the Democrats are openly calling bluff on Trump.

The Democrats, however, may have unwittingly guaranteed Trump’s success with North Korea by removing his negotiating room. Without the Senate Democrats threatening never to end sanctions against North Korea unless their demands are met, Kim Jong Un and South Korean president Moon Jae-in could still push Trump to settle for a less comprehensive denuclearization deal (not removing chemical and biological weapons, for example). Now Trump can tell Kim and Moon that the specifics of North Korean denuclearization and the continued imposing of sanctions are entirely out of his hands due to the design of America’s political system. All Kim can do is accept the Democrats’ (really Trump’s) demands and set North Korea on the path of historic change, or reject the demands and await regime collapse.

Of course, there is a good chance that the Trump administration would insist upon the same tough denuclearization demands without the Democrats list given what the administration has already said publicly. But in that scenario, North Korea and South Korea have more wriggle room to bargain.

North Korea
We earlier analyzed that North Korea would agree to CVID given its failing economy and Kim Jong Un’s worries about regime survival. Recent developments further affirm our analysis:

Kim seems to have only two options in talks with Trump. He can either agree to the Democrats’ list of denuclearization demands and preserve his rule, or reject the demands and court war by continuing with his nuclear provocations. Kim would almost certainly try to cut a more favorable deal with Trump, but his not being able to afford a hotel stay in Singapore seems to indicate that he might not have anything substantial to bargain with. Also, it is unlikely that Kim would get help from Xi Jinping to pressure Trump given that Xi has his own troubles with the U.S. over trade.

China
We previously wrote that China cannot withstand a trade war with the U.S., and that Xi Jinping would do anything to delay a trade conflict to buy time to fix China’s economic and financial sector woes. A bond default tsunami; mounting debt crisis in the provinces; China’s foreign reserves seeing a U.S. dollar shortage; and the Hong Kong government repeatedly buying Hong Kong dollars to prop up the currency offer a glimpse at the ills plaguing China’s economy. Xi’s headaches are compounded by the coming U.S. tariffs on Chinese imports and Chinese telecommunications equipment maker ZTE being unable to get a reprieve from a seven-year U.S. business ban. Indeed, China’s offer to buy $70 billion worth of American agriculture and energy products in exchange for a suspension of $50 billion of tariffs hints at Beijing’s desperation.

The Chinese Communist Party has staked its political legitimacy on China’s economic performance, and it is now facing a crisis of regime survival. Facing U.S. trade and intellectual property pressure, there is virtually no chance that the CCP would intercede on behalf of the North Korean regime in its denuclearization negotiations with America. (See: “Decoding China’s Statement on Sino-US Trade Talks“)

What’s next:
1. In Singapore, Kim Jong Un should agree to a framework of denuclearization that is based on the Senate Democrats’ list of demands. In exchange, Trump could offer details of the security guarantees that America can provide to Kim, and outline how the U.S. could set North Korea on the path of economic prosperity. Success would hinge on Kim’s willingness to trust Trump.

The Democrats may claim credit for a successful denuclearization deal, but there is nothing in their demands that exceed what Trump and his top officials have already been saying. Kim’s biggest headache would be selling the deal to the North Korean officials and people.

2. Xi Jinping should continue to cooperate with Trump on North Korea in hopes of holding off tariffs for as long as possible and rescuing ZTE from a very embarrassing and painful collapse. Xi’s political rivals, however, may find ways to undermine him and drive a wedge between him and Trump.