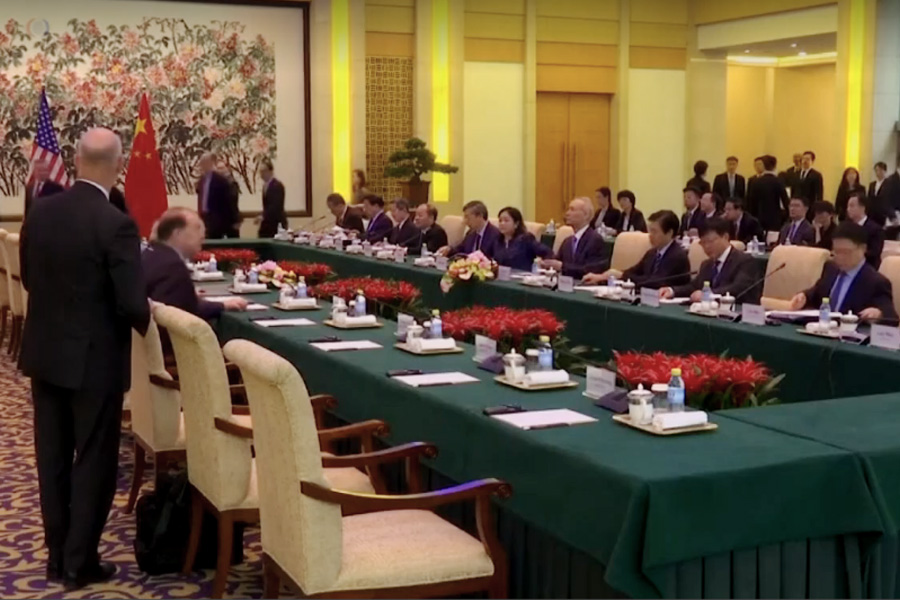 ◎ China’s statement suggests a stalemate in the trade talks.

China and the United States held the third round of high-level trade talks in Beijing from June 2 to June 3. U.S. Commerce Secretary Wilbur Ross led lower level officials in meetings at the Diaoyutai State Guesthouse with a Chinese team led by State Council vice premier Liu He.

Unlike the previous round of trade talks in Washington where a joint statement was made, only China issued a statement on the talks shortly after its conclusion. China’s statement noted that both sides had “good communication” on areas needed to reach the consensus in Washington, but “relevant details are yet to be confirmed.” The statement added: “Reform and opening-up as well as expanding domestic demand are China’s national strategies. Our set pace will not change.”

State mouthpiece Xinhua reiterated the need for China to carry out reform and opening up “at our own pace” in a separate commentary titled “Results Don’t Come Easy, and Need to be Cherished with Sincerity and Trust.” The commentary added that China would import more agriculture and energy from the U.S. to conform to the country’s “high-quality economic development” requirements and help “improve the U.S. trade imbalance.”

The Xinhua commentary also noted that while America hopes to gain “short-term results as quickly as possible” out of domestic political considerations, it cannot “ask for sky-high prices” and be preoccupied only with America’s concerns and “not consider” the concerns of the other side.

The commentary ended by threatening to resume the trade conflict should the U.S. impose tariffs. And when a trade war breaks out, “the results from the hard-won negotiations would be voided. America knows the score.”

The backdrop:
May 28: China and U.S. envoys clashed at the World Trade Organization on the issue of China’s forced technology transfer. China’s Ambassador Zhang Xiangchen denied the U.S. claim, and instead accused America of “deliberate misrepresentation.”

May 29: The White House issued a statement on imposing 25 percent tariffs on $50 billion of Chinese goods, including those related to the “Made in China 2025” program.

May 30: At a State Council meeting convened by Chinese premier Li Keqiang, China confirmed that it would implement investor-friendly measures such as widen market access, revise a negative list for foreign investors by July 1, fully protect intellectual property, and simplify permit procedures (issue visas within two working days) for foreigners to work in China.

May 31: According to an article by a “senior China media person” that was carried by Hong Kong media, Liu He was operating on the principle of “compromise completely, accept half-agreements” while in Washington for trade talks. Liu also had the final say on decisions to be made at the talks. The “senior China media person” noted that North Korean leader Kim Jong Un’s “about-face” when Liu was in Washington was likely an “incredibly idiotic” attempt to hold the Sino-U.S. trade discussions hostage, and had nothing to do with Liu He.

The “senior China media person” added that of all the Politburo members, Li Keqiang and Liu He are strongly opposed to fighting a trade war with the U.S. Liu believes that China would definitely lose a trade war and that the conflict would trigger “unthinkable” prospects like China’s complete economic collapse.

Separately, Tian Dongfang, a non-executive director at Chinese tech company ZTE, was appointed to the role of Party secretary of ZTE’s Party committee. Tian’s appointment was made by the Shenzhen municipal Party committee.

June 1: According to Reuters, the Trump administration is looking to claim a $1.7 billion fine from ZTE and get ZTE to appoint external monitors to police its compliance in exchange for lifting a business ban. It is unclear with China or the U.S. have reached an agreement on ZTE.

Separately, the State Council removed Zhu Guangyao as vice minister of finance and appointed Liao Min to replace him. Zhu was responsible for formulating tariffs and was one of the officials involved in the first two rounds of Sino-U.S. trade talks.

Our take:
1. China’s unilateral statement on the third round of Sino-U.S. trade discussions and Xinhua’s commentary suggest a stalemate between both countries. The language and phrasing of the statement and the commentary—a threat to impose tariffs follows a call to abide by consensus and be reasonable—also reflect the impossible situation that Chinese leader Xi Jinping finds himself in.

Because China cannot withstand a trade war, the Chinese Communist Party (CCP) has to make concessions to America while saving face. Xi, however, cannot hide the fact that China made concessions from his opponents inside the CCP. While Xi’s concessions are ultimately aimed at preserving the CCP’s position in the long-run, his rivals would not let up a chance to launch counterattacks and make things difficult for his administration and Sino-U.S. relations.

2. If Liu He really abided by the principle of “compromise completely, accept half-agreements” during the Sino-U.S. trade talks, then this corroborates our analysis that America had made good progress on trade because the CCP had given up “tangible concessions.”

3. China and the U.S. have reached an impasse on trade due to the fundamentally different political cultures of both countries. American government administrators are usually forthcoming in their public statements because they have to be answerable to the public, while CCP officials and state media are prone to doublespeak as they are used to obscuring or manipulating the truth to prop up the Party’s public image. The two different approaches to public messaging can generate confusion on both sides even neither side has departed from consensus.

The final goal of Trump’s trade war appears to be pushing China to make structural changes to its economy. Speaking at the G7 financial leaders meeting on May 3, U.S. Treasury Secretary said that “if there are structural changes that allow our companies to compete fairly, by definition, that will deal with the trade deficit alone.” Getting China to agree to very specific deficit reduction figures is one way of ensuring that the structural changes take place because Beijing cannot possibly cut the deficit by buying more U.S. agriculture and energy alone. Yet the CCP would be very unwilling to sign a deal with a specific figure because it would be viewed as treasonous in China. This is likely why Chinese and American officials were not able to agree on cutting the trade deficit by $200 billion before the release of the joint statement in Washington. China’s unwillingness to commit, however, would almost certainly create a trust issue between both countries.

The Xi administration appears to be willing to make structural changes to ensure regime survival. The CCP system, however, prevents Xi from making structural changes even if he has tremendous authority over the regime. Not showing weakness is a principle that the CCP and its propaganda apparatus lives by, and the Chinese people and officialdom are not used to admissions of defeat. Hence, Xinhua and other state-run media have to package Chinese concessions as “win-win” victories and declare that China’s reform and opening up measures are self-initiated “national strategies” whose pace would not be affected by American pressure. State propaganda also has to issue bellicose statements like waging a trade war with the U.S. “to the very end.” The problem with propaganda becomes pronounced in the ranks of Chinese officials who are not directly involved in the trade talks. As seen in the recent WTO disagreement, Chinese officials stuck to “the Party is most correct and deny everything” rhetoric when challenged by their foreign counterparts on the CCP’s transgressions.

If China and the U.S. cannot see past their differences in political culture and account for the “concerns of the other side,” as the Xinhua commentary noted, then Sino-U.S. trade tensions could be prolonged beyond what is tolerable for both countries.

4. The U.S. business ban on ZTE has caused the CCP to lose control over its propaganda narrative. Many Chinese officials and people have bought into the myth of “China’s great power rise,” a line that the CCP has been pushing for years.

We believe that ZTE’s plight has placed Xi Jinping under immense pressure and threatens to undermine his authority. Whether or not he can push back against political challenges hinges on securing a reprieve for ZTE. If the U.S. replaces the ban with a heavy fine and “probation,” Xi could preserve his authority and be able to push through economic reforms.

Ultimately, the CCP needs to make structural changes to its political system if it is to liberalize China’s economy to a higher degree and more permanently resolve Sino-U.S. trade tensions.