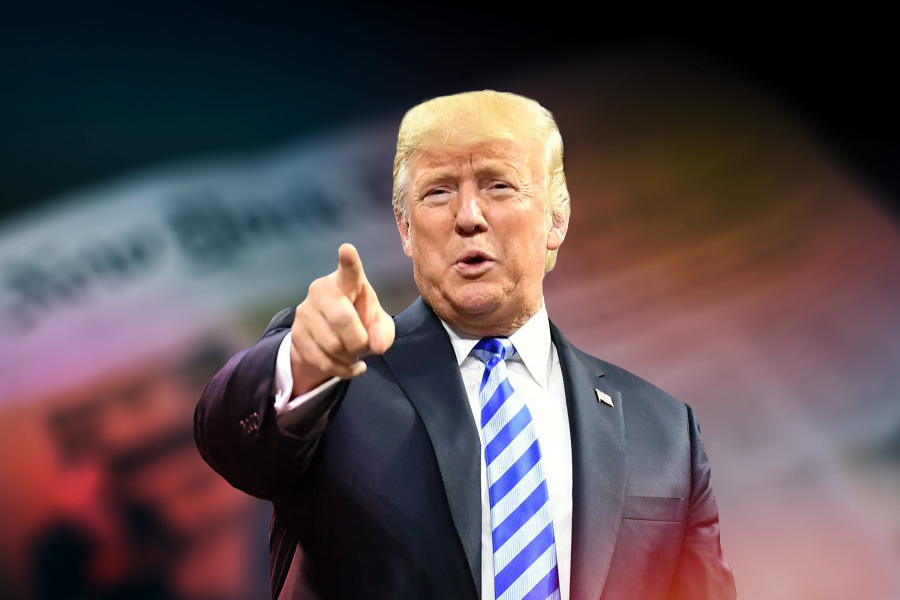 ◎ Using the Red Matrix aggressively is a double-edged sword for the CCP when the U.S. is on high-alert for CCP influence and interference operations.

Speaking at the Center for Strategic and International Studies on Nov. 9, White House trade advisor Peter Navarro said: “As part of a Chinese government influence operation, globalist billionaires are putting the full court press on the White House in advance of the G20 in Argentina.”

Based on our observation, the Chinese Communist Party is indeed going “full court press” with its influence operations. And the CCP does not appear to be relying only on “globalist billionaires” to pressure President Donald Trump.

We believe that the CCP is turning to its Red Matrix to keep the world “plugged in” to a view of China that benefits the regime in the hopes of pressuring Trump to reach a truce with Xi Jinping at the G2o. Additionally, the CCP needs to ensure that global sentiments towards its regime are positive to prevent a collapse in market confidence and an accelerated worsening of China’s economy. Influencing global sentiments also helps the CCP maintain domestic political and social stability.

In studying China-related messaging in the English and Chinese language informational environment in the lead up to President Donald Trump and Xi Jinping’s meeting at the G20, we have identified several narratives that are in sync with CCP propaganda:

The last narrative appears to be gaining prominence after Xi Jinping and Wang Qishan delivered speeches at an expo in Shanghai and a forum for business elites in Singapore respectively in November. Specifically, Xi said: “To use a metaphor, the Chinese economy is not a pond, but an ocean. The ocean may have its calm days, but big winds and storms are only to be expected … Having experienced numerous winds and storms, the ocean will still be there … After going through 5,000 years of trials and tribulations, China is still here.”

Our take:
1. We noted in our article on the Red Matrix that “survival and dominance are two sides of the same coin” for the CCP. The Party went into survival mode after the first round of U.S. tariffs were imposed and shifted the objectives of its influence operations accordingly, a development that is now reflected clearly in Red Matrix narratives.

Based on our study of CCP propaganda and disinformation tactics, the Party has a tendency to project confidence and strength when it is actually in a very tough spot. In our earlier analysis, we noted that the CCP is implementing an Empty Fort Strategy by dealing with the U.S. from a position of strength despite the Chinese economy sustaining painful losses after tariffs were imposed.

CCP propaganda and disinformation can sometimes be debunked by examining historical fact. For instance, Xi Jinping’s “ocean” metaphor in his Shanghai speech may sound impressive and reasonable, but it rings hollow because the CCP frequently conflates China and the five-millennial-old Chinese civilization with its nearly seven-decade-old communist regime. The CCP, which embraces the Western ideology of communism, was originally a branch of the Soviet Union. Also, unlike previous Chinese governments, the CCP sought to disassociate itself entirely from the Chinese civilization once it seized power. Under Mao Zedong, the CCP venerated Marx, Engels, Lenin, and Stalin, and moved to systematically eradicate traditional Chinese culture and heritage, most notoriously during the Cultural Revolution. In modern times, the CCP uses traditional Chinese culture as a Trojan Horse to extend its influence, most famously through the Confucius Institutes. Thus, it is disingenuous of Xi to equate China’s survivability record with that of the CCP and its regime.

2. Not all messaging that the Sino-U.S. trade war will adversely affect the American economy is necessarily the work of the CCP. But it is definitely part of the CCP agenda to promote such views.

In an Oct. 19 interview with financial media Real Vision, Hayman Capital founder Kyle Bass said that China has “a lot of influence in the think tanks and in the universities of the US, and so when the narrative comes that US trade spats with China are going to increase the price of goods here, it just doesn’t happen, and it won’t happen, because the devaluation of the Chinese currency will spread that tariff out amongst the Chinese people.”

Bass also said that while “there are a lot of reports out there on Chinese influence and our think tanks,” he is aware of “a few instances personally where the Chinese either pay the think tanks, or more importantly, they pay a think tank writer’s spouse to teach Chinese elite English … And they pay that spouse way more than the person that the think tank earns in a year.”

Meanwhile, European economists recently found that China, and not the U.S., will end up paying more for the trade war. According to a paper by EconPol Europe published in November, U.S. companies and consumers will pay 4.5 percent more on average for all Chinese goods affected by 25 percent tariffs, while the other 20.5 percent toll will be borne by Chinese producers. Also, because the Chinese goods targeted by tariffs can be mostly replaced with other goods, Chinese exporters will be forced to cut selling prices to keep buyers.

“Through its strategic choice of Chinese products, the U.S. government was not only able to minimize the negative effects on U.S. consumers and firms, but also to create substantial net welfare gains in the U.S.,” the paper wrote.

3. The CCP is very likely afraid that it cannot withstand a global “maximum pressure” campaign led by America to get the Chinese regime to open its markets and enact concrete reforms. Unruly, thuggish behavior by Chinese officials at the Asia-Pacific Economic Cooperation summit in Papua New Guinea is the most obvious manifestation that desperation is kicking in.

Politically, Xi Jinping is not the all-powerful dictator as depicted in most narratives. Xi appears to have incurred backlash from rival factions over his failure to prevent the outbreak of the trade war, and has recently taken action, some drastic, to stabilize his rule (see our analysis of the Meng Hongwei case here and here). An external “maximum pressure” campaign against the PRC could provoke stronger domestic opposition to Xi’s rule and/or inspire the warring factions to unite behind Xi. Regardless, political chaos in the CCP is an existential threat to regime survival, and the CCP would prefer to defuse external pressures through influence campaigns before the pressures affect domestic affairs.

Economically, the CCP has been unable to withstand the trade war thus far and very likely cannot survive a full-blown trade conflict with the United States. China’s economic figures in October have failed to meet market expectations virtually across the board, and the economy looks set to worsen further when America increases tariff rates in January 2019 or adds another $267 billion in tariffs. Meanwhile, Chinese economists have been generally pessimistic about the impact of the Sino-U.S. trade war. We have also previously analyzed the PRC’s problems with fake data, implicit debt, and other issues (see more analysis here).

Socially, the CCP has been having headaches this year in dealing with protesting military veterans, students, workers, and victims of P2P failures. While the CCP has been tightening control over society, most notoriously with the suppression of Uyghur Muslims in Xinjiang, the so-called “stability maintenance” work places an additional financial burden on local governments struggling with bad debts and decreasing revenue. Beijing appears to be trying to save costs by getting local governments and the community to take some responsibility for public security work by promoting the “Fengqiao Experience” (see Nov. 19 edition of the SinoWeekly Plus newsletter for the full analysis), but this solution will likely only exacerbate the problem.

Faced with grim social, economic, and political outlook, the CCP is forced to wield its “pen” in a “full court press,” or aggressively promote propaganda and strengthen the Red Matrix.

4. The CCP’s survival fears have compelled it to tap the messaging channels which it controls or has great influence over to heighten the Red Matrix effect. A stronger Red Matrix, however, is a double-edged sword.

Strengthening the Red Matrix at this stage of the PRC-U.S. rivalry is a high-risk maneuver by the CCP because the U.S. government is on the lookout for CCP influence and interference operations. Top U.S. intelligence officials have warned about the CCP’s “existential” threat to national security and noted that the PRC is the number one counterintelligence priority for America. While the CCP might regain and retain investor confidence in China’s markets and slow down the deterioration of the Chinese economy with the Red Matrix, it does so at the peril of provoking strong U.S. pushback.

The CCP is not out of the woods even in the unlikely scenario where Trump and Xi reach some sort of “truce” at the G20. A truce is not a deal or the end of the trade war, and it means that what Xi has to offer is ultimately unsatisfactory to Trump. Because Beijing did not make enough “significant and concrete concessions,” the U.S. will move to “escalate economic, diplomatic and political pressure” on the PRC, according to Vice President Mike Pence’s recent interview with the Washington Post. When the U.S. implements a “maximum pressure” campaign against the PRC, the CCP risks losing control over the information distribution channels and networks which it had cultivated for decades. And without control over the informational environment, the CCP will eventually lose the Red Matrix.

What’s next:
1. The full court press is a basketball defensive tactic that is typically employed by the team that is behind late in a game to force mistakes or tire the leading team. However, the press, once broken, leaves the trailing team open to quick counters. Teams that deploy a full court press also tend to tire quickly because the press is physically demanding.

The CCP is deploying a “full court press” precisely because it is behind in the trade war and needs to tire/slow down Washington or force it to make mistakes to prevent defeat. Thus, turning to the Red Matrix and its enablers to pressure the Trump administration is a desperation move on the CCP’s part.

The CCP appears to be betting that its Red Matrix can be decisive in pushing President Trump to agree to a trade “truce” at the G20 in Argentina. If that outcome cannot be realized, the CCP will likely notch up the rhetoric by playing the race card against Trump and his administration. According to the 2018 U.S.-China Economic and Security Commission annual report, “the CCP will be quick to cast any pushback or legitimate criticism as fear, nationalism, protectionism, and racism against the Chinese people.”

2. Given Peter Navarro’s remarks at Hudson Institute, we believe that President Trump and his administration is prepared to handle the CCP’s “full court press.” Barring last-minute surprises, we are not optimistic that Trump and Xi will agree to the framework of a deal at the G20 or any sort of truce.

If Trump is particularly dissatisfied with what Xi has to offer, he could even announce the next wave of 25 percent tariffs on $267 billion worth of Chinese goods in December. The tariffs will likely be implemented around the Lunar New Year period in China once the 60-day public comment and review process is up, placing immense pressure on the CCP.

We noted in August that the U.S. policy on China could take an ideological turn. Expect Washington to address CCP influence and interference more openly after the G20 summit regardless of the outcome.

Get smart:
Unplugging from the Red Matrix is essential to understanding the state of China today. A better understanding of China and the CCP helps businesses avoid risk and find other opportunities.

Subscribe to our premium newsletter and training courses today.