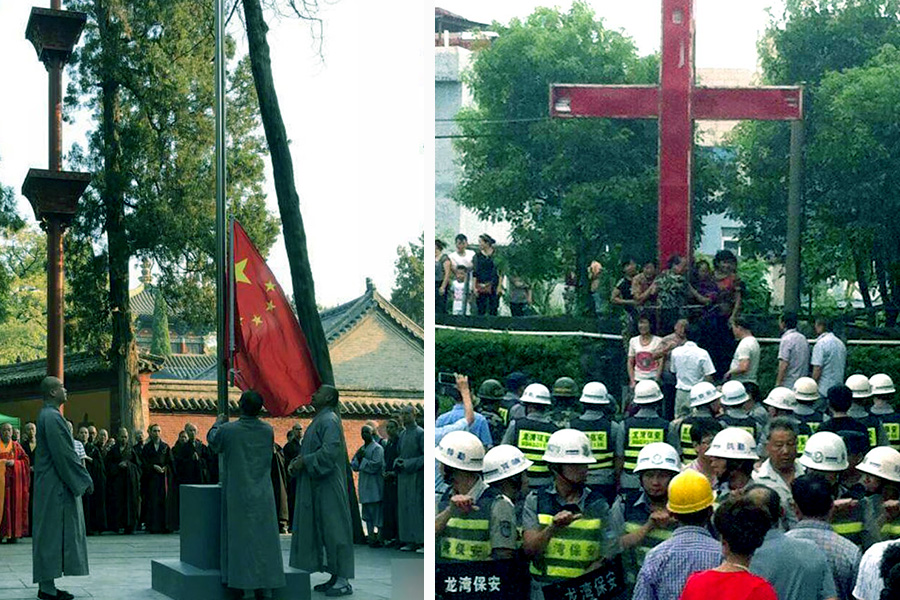 ◎ Based on our research and understanding of the CCP, the more tightly it controls society, the more it feels imperiled.

Since the outbreak of the Sino-U.S. trade war in July, the Chinese Communist Party (CCP) has been controlling Chinese society with ever-increasing strictness. The CCP’s clamp down on religion and freedom of speech have been particularly severe, and it seems to be “maintaining stability” as though it is beleaguered.

Based on our research and understanding of the CCP, the more tightly it controls society, the more it feels imperiled.

The backdrop:
Religion control
1. In the morning of Aug. 27, the abbot of the Shaolin Temple in Henan Province assembled the temple’s monks for a ceremony to raise the CCP red flag on temple grounds. The heads of the local CCP United Work Front Department (Li Li) and the Religion Bureau (Wu Song Tao) were among several officials present to observe the ceremony.

The flag raising at the Shaolin Temple was carried out in accordance with an initiative to “raise the national flag at religious sites” that was proposed at a national-level religious organization meeting on July 31. On Aug. 15, the CCP Buddhist Association studied the initiative at a key meeting in Beijing.

The mandated flag raising is highly symbolic as the CCP is forcing religious groups to show obeisance to and accept domination by an atheist authority.

2. The CCP has recently intensified the suppression of Christians across China, according to the Chinese Christian Fellowship of Righteousness, a group that tracks the persecution of Christians in China. The Fellowship notes that the CCP crackdown includes destroying crosses in churches and replacing them with the CCP red flag and images of CCP leaders; monitoring the content of sermons; “sinicizing Christianity”; introducing “socialist values” into churches; forcing Christians to sign an “undertaking to stop believing in Christianity”; and forcibly demolishing churches.

Suppression in Henan Province, where there is a large population of Christians, has been particularly heavy-handed. For instance, 56 of the 90-plus churches (not including underground churches) in Zhengzhou City, the capital of Henan, have been forcibly closed to date.

Between Aug. 22 to Aug. 23, police officers from 10 cities in Liaoning Province arrested 42 Falun Gong adherents and four of their family members.

4. According to a report in Foreign Policy magazine, “state policy treats all Uyghurs as likely opponents of the party” since Chen Quanguo became Xinjiang’s Party secretary in August 2016. Around 1 million Uyghurs have been vanished and interned in re-education camps, where they are indoctrinated to “love” the CCP.

Several Xinjiang residents told the Chinese language edition of The Epoch Times in an anonymous interview that the local authorities are not focused on growing the economy but on “maintaining stability.” Concentration camps are being constructed everywhere “to a point where foreigners might find unimaginable.” The Xinjiang residents also said that the CCP is forcing Uyghur Muslims to smoke and drink against their religion, and would send to re-education camp those who refuse to comply with their orders.

Speech control
1. Recently, a notice that is reportedly from Henan’s Zhumadian City Central Cyberspace Affairs Commission made the rounds on Chinese social media. Dated Aug. 27, the notice requires all work units in the city to submit hard copy name lists of “Big Vs” (verified accounts of influential Weibo users) to the Commission by Aug. 30. The lists should include “Big Vs” with over 10,000 followers or those who people pay particular attention to.

In July, Chen Jie, a prominent media professional and “Big V,” was arrested on charges of “operating an illegal business” and carrying out “extortion and blackmail.” Before his arrest, Chen had been exposing and criticizing Chinese officials who had engaged in fraudulent and corrupt activities. His arrest attracted great public interest. In August, state mouthpiece Xinhua published a nearly 5,000 word-long, “sentence before trial” article listing Chen Jie’s “crimes.”

2. The number of netizens who have been arrested for online speech is on the rise.

On Aug. 16, public security officers in Anhui’s Ma’anshan City arrested an 18-year-old Chinese male for “disorderly behavior.” The teenager, who used the online moniker “Sibodayetaijun,” had published an article titled “Abe is My Dad, You Mad?” where he wrote: “Ill-fate has me born in the wrong country. The result can only be a grim future. I must do more good deeds this life so that I can become Taiwanese or Japanese in the next life.”

Late at night on Aug. 23, people’s police from the Shenzhen Shajing Police Station in Guangdong forced their way into the home of a woman on the pretext of what she had published online. The incident was captured on video and circulated on the Chinese internet.

On Aug. 25, local police in Shandong’s Shouguang City arrested two women for “spreading rumors.” The women had been telling their friends and relatives in a WeChat group to “eat less pork and use more disinfectant at home.”

3. Several professors in China have lost their jobs for their speech.

On July 6, Wang Gang, an associate professor of clinical medicine at Hebei University of Engineering, was dismissed by the college. Wang had frequently criticized the government on WeChat.

On July 17, Christopher Balding, an American professor at Peking University’s HSBC School of Business in Shenzhen, said in a blog post that the college was not renewing his contract. “I know the unspoken reason for my dismissal. You do not work under the Communist Party without knowing the risks,” he wrote in his blog. Balding has been outspoken about the authoritarian Chinese regime on social media and other forums.

On Aug. 16, Yang Shaozheng, a professor at Guizhou University’s School of Economics, was officially sacked. One of the reasons for Yang’s dismissal was publishing and disseminating “incorrect speech of the political nature.” Yang had previously written an article where he asserted that the estimated 20 trillion yuan spent on the 20 million-odd professional Party cadres and non-Party workers was a “societal waste.” His article caused a stir when it was published.

The big picture:
Sino-U.S. trade tensions continue to worsen. Vice ministerial-level talks on Aug. 22 and Aug. 23 in Washington D.C. did not yield any progress. Meanwhile, President Donald Trump is preparing to go ahead with 25 percent tariffs on $200 billion worth of Chinese imports immediately after a public-comment period is over on Sept. 6, according to Bloomberg News.

On Aug. 24, Trump abruptly canceled Secretary of State Mike Pompeo’s visit to North Korea, citing China’s unwillingness to help with the DPRK’s denuclearization process. “Secretary Pompeo looks forward to going to North Korea in the near future, most likely after our Trading relationship with China is resolved,” Trump tweeted.

Our take:
1. In our June 15 analysis, we wrote: “The U.S. tariffs heighten the political risk faced by the Xi Jinping administration. Xi’s political opponents and those who have reason to be unhappy with his rule would undoubtedly seize the opportunity to mount a counterattack. To curb anti-Xi forces, Xi may find it necessary to further tighten the Chinese regime’s control over society. Increased social control would lead to increased social tension, and further endangers the Xi administration.”

The stricter societal controls in China in recent months affirms our June analysis. The CCP’s clamp down on society is one of the outcomes of its misreading America’s policy shift and its strategy of gambling on the result of the U.S. midterm elections.

2. Before the beginning of the Sino-U.S. trade war, we wrote several articles analyzing why China would not be able to withstand a trade war (see here, here, here). A full-blown trade war would cause China’s economy to worsen further, resulting in inflation, increased capital outflows, higher food prices, and higher unemployment.

Per the CCP’s political culture, tightening control over society is a necessary evil to preserve power. The more danger the CCP feels, the more tightly it would squeeze society.

3. We believe that America and its allies would step up sanctions or stop doing business with the Chinese regime as they become clearer about the CCP threat. Capital will continue to leave China, and local governments in the regime would see their revenue plunge.

The CCP faces collapse when it does not have sufficient funds to sustain brutal “stability maintenance” operations. The CCP is likely acutely aware of this, and is hence tightening control over society now.