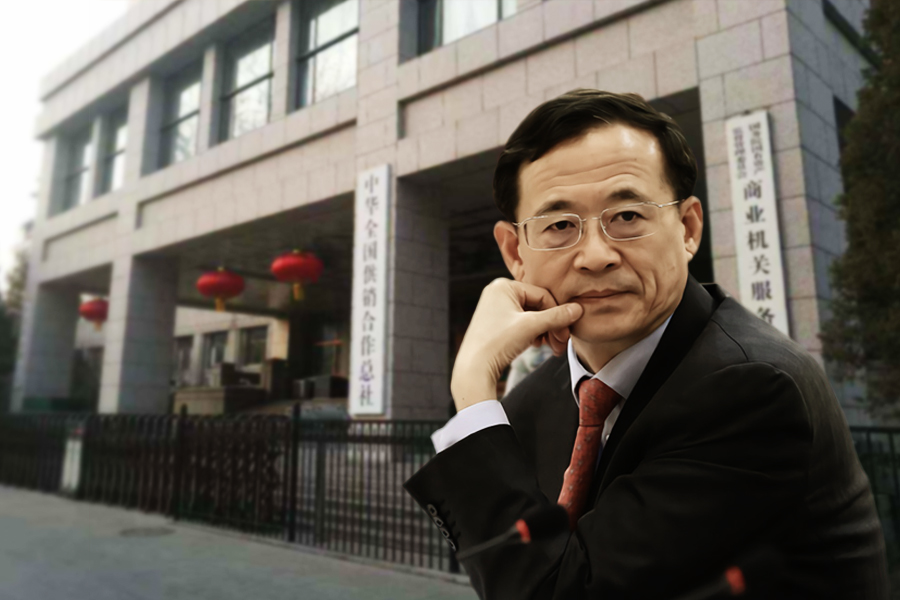 ◎ Liu Shiyu’s transfer to the CCP’s rural supply cooperative is more than just a “demotion.”

On Jan. 26, China Securities Regulatory Commission (CSRC) head Liu Shiyu was transferred to the All-China Federation of Supply and Marketing Cooperatives (ACFSMC) to serve as its director and deputy Party secretary.

Yi Huiman, chairman of the Industrial & Commercial Bank of China and alternate member of the 19th Central Committee, replaced Liu as head of the CSRC.

On Jan. 2 and Jan. 4, the mainland indexes and markets closed at record lows.

The big picture:
The United States and the Chinese regime are holding negotiations to see if the framework of a trade deal can be reached by March 1. On Jan. 24, U.S. Commerce Secretary Wilbur Ross told CNBC that the U.S. and China are still “miles and miles from getting a resolution.”

Our take:
1. Some China watchers believe that Liu Shiyu’s transfer to the ACFSMC is a “demotion” for the markets plunging under his watch.

We believe that the Chinese Communist Party does want to give investors the impression that Liu is being “punished” for poor stock market performance. Based on our research into the CCP factional struggle, however, there is a strong possibility that Liu’s transfer has more to do with the Party making advanced preparations to address a future crisis than a straightforward “sidelining” of an “underperforming” senior cadre.

We believe that the CCP’s reshuffling of Liu Shiyu is aimed at:
a) Signaling to investors that the regime is about to introduce favorable policy changes to rescue the markets;
b) Making emergency preparations to resolve social unrest in the event that Sino-U.S. trade talks fail and the regime is forced to partially “close up” China.

2. In considering the primacy of the factional struggle in CCP elite politics, there is a case to be made that Liu Shiyu, who appears to be a trusted official in the Xi Jinping camp, had performed satisfactorily in aiding Xi in curbing political rivals while he was the top securities regulator.

A brief review of Liu’s stint in the CSRC shows that he was instrumental in cleaning up unhealthy practices in the financial markets and sending important political signals.

In 2015, China’s A-shares crashed, a development which we believe is linked with a so-called “economic coup” by the Jiang faction against Xi. On Feb. 19, 2016, Liu Shiyu was appointed CSRC head, and he went about tightening regulation and putting suspected market manipulators (“giant crocodiles”) on notice. During Liu’s three years as chief securities regulator, the CSRC collected record-high fines and administrative penalties.

Near the end of 2016, Liu Shiyu slammed asset managers for using illegal funds to perform “barbaric” leveraged buyouts, and described the corporate raiders as “evil spirits” and “poisonous pests.” He warned: “Strangers have become barbarians, and barbarians become robbers. When you challenge the law, what awaits you are the gaping doors of a prison cell.” At the time, observers believed that Liu was alluding to companies like Anbang Group. Half a year later, Anbang chairman Wu Xiaohui was investigated, and the authorities took over the running of Anbang in February 2018.

3. The reshuffling of Liu Shiyu out of the CSRC should be good news for the Chinese markets.

Liu’s strict control over mainland markets and willingness to offend interest groups in carrying out his duties caused investors to lose confidence. Restoring market confidence is a must for Beijing to reverse current economic trends. In particular, 2019 will see a wave of restricted shares becoming unrestricted, and the central authorities need to forestall mass share dumping.

The CCP risks triggering a financial crisis if the Chinese markets continue to plummet. Hence, it has to signal that change is coming to restore some investor confidence and stabilize the situation. And the best way to show that new policies are afoot is to replace Liu; investors will be skeptical of any move to relax policies so long as Liu is still in charge of the top securities regulator.

4. Liu Shiyu’s move to the regime’s farm supply cooperative suggests that the CCP is preparing in advance for the worst should Sino-U.S. trade talks irrevocably break down.

After U.S. President Donald Trump announced the first wave of tariffs on Chinese products in June 2018, we analyzed that the CCP could either “continue to accelerate China’s economic opening up,” or “abandon reforms, gradually close up China, and move to strengthen its “stability maintenance” efforts” in the worst-case scenario. Should the Party decide to close up China, it would turn to the All-China Federation of Supply and Marketing Cooperatives, an organ established in 1950 to control the masses that are dispersed in the villages, as well as resolve the circulation and distribution of food and other goods in the countryside.

On Jan. 15, 2018, the ACFSMC released a report at its fifth plenary session which showed that it had reorganized over 10,000 grassroots supply and marketing cooperatives since 2013. At the time of the report’s release, China had more than 30,000 grassroots cooperatives, and the ACFSMC’s coverage of townships had increased to 95 percent from 56 percent in 2012.

This Jan. 15, the ACFSMC released a report at its seventh plenary session which indicated that it had established nearly 1 million ACFSMC business service networks countrywide, with 80 percent of these networks distributed in the counties and administrative divisions below the county-level. In 2018, sales in the ACFSMC system totaled 5.9 trillion yuan (accounting for nearly 7 percent of GDP), with actual profits of 46.8 billion yuan (a profit rate of less than 1 percent). Total ACFSMC assets were worth 1.6 trillion yuan.

The expansion of ACFSMC networks come as China faces a food crisis. In September issues of our premium newsletter, we wrote that the CCP regime had tried to cover up the fact that the summer harvest in 2018 had shrunk by nearly 30 percent while the country’s food self-sufficiency rate is likely at about 66 percent (the safety line is 95 percent and above).

The expansion of ACFSMC networks also comes amid an economic downturn in China, rising business failure, and increasing unemployment. The Sino-U.S. trade war has accelerated the above phenomenon.

In the event of a complete breakdown in trade talks between the U.S. and the Chinese regime, the situation in China could deteriorate rapidly and social tensions will escalate. The CCP could be forced to mobilize the military and utilize its Orwellian surveillance systems (the “social credit system,” facial recognition technology, etc.) to strictly control the flow of people in the country. The ACFSMC would be tasked with guaranteeing the supply of emergency rations in the countryside. The Party’s goal would be preventing unemployed people in the rural areas (the so-called “low-end population”) from assembling in the big cities to trigger a “color revolution.”[1]

The appointment of Liu Shiyu, a tough administrator who is loyal to Xi and is not afraid of offending interest groups in implementing Xi’s policies, to lead the ACFSMC makes sense in a scenario where the cooperative system needs to play an important role during times of social upheaval.

5. In sum, we believe that Liu Shiyu’s transfer is yet another sign that the CCP regime is facing an immense political crisis (see here and here). The reshuffling of Liu also suggests that Beijing is considering measures to at least partially close up China.

Get smart:
The trajectory of Sino-U.S. relations will decisively shape the political situation in China. Tracking the CCP factional struggle and personnel movements offer important clues about the Party elite’s plans for China should the new “cold war” take a turn for the worse.

Businesses, investors, and governments can gain unique insights about China and the Sino-U.S. relationship to sidestep risks and seize opportunities in this tumultuous year with our special report.

Note:
[1] To ensure regime survival, the CCP has always been preoccupied with controlling the populace during critical periods.

During the Great Leap Forward campaign, the CCP used “people’s militia” to strictly monitor the inhabitants of communes and prevent peasants from escaping even during periods of famine and starvation. Today, the CCP is repeating the tactics of its revolutionary past by using advanced surveillance equipment in its efforts to suppress the Uyghur minorities in Xinjiang, as well as rein in the protesting military veterans and dissidents.