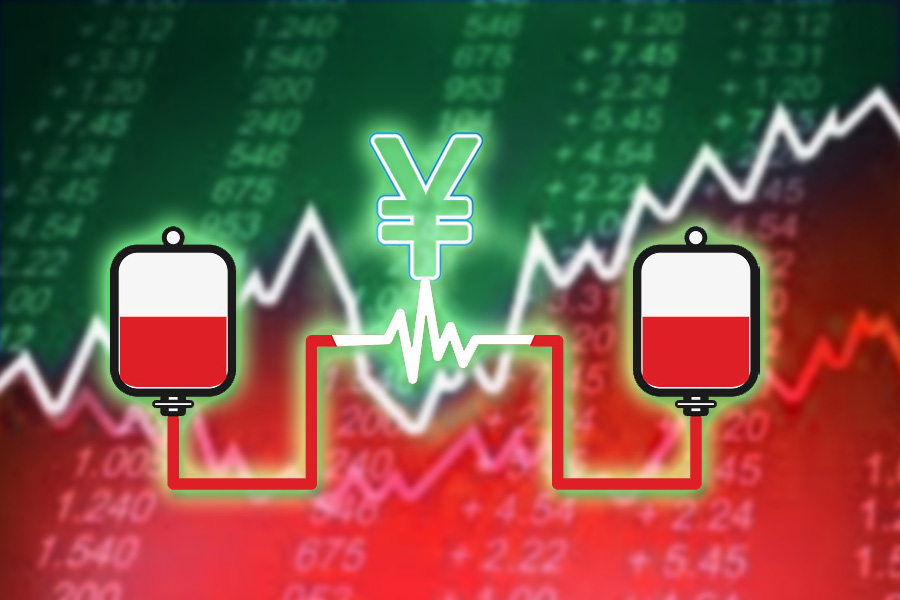 ◎ Major shareholders in China could be thinking of or taking steps to dump newly unrestricted shares in the wake of a worsening economy and slumping market confidence.

On Jan. 8, the official China Securities Journal ran an article titled “The Good Prospects of the PBoC Holding Domestic Stock” by Dongxing Securities lead economist Zhang Anyuan. The article suggests that the central bank should own 1.58-1.78 trillion yuan (about $233.17 billion to $262.68 billion) worth of “suitable” domestic equity assets, and cites the example of Japan’s central bank holding local stock assets. Zhang Anyuan’s article sparked intense discussion among scholars and experts.

The backdrop:
Jan. 2: At least 37 Chinese companies announced that they are selling company-held shares on the first trading day of the year.

The Shenzhen Stock Exchange issued a letter of concern to Ningbo GQY Video & Telecom Joint-Stock Co. Ltd. requesting a supplementary explanation about the company’s earlier announcement that its actual controllers are intending to transfer 68.2 percent of Ningbo GQY shares to Ningbo Gaosi Investment Co. Ltd. for 784 million yuan. Chinese media reports say that the actual controllers of Ningbo GQY are Guo Qizhen and Yuan Xiangyang, and that they had cashed out a total of nearly 1.3 billion yuan worth of company shares from July 2013 to the present.

Jan. 10: According to Shanghai Stock Exchange supervision work documents, the senior management of listed company Shanghai Zhongyida Co. Ltd. has been “collective out of contact” since Jan. 1, 2019. The Shanghai Stock Exchange has requested that Shanghai Zhongyida contact the exchange within 10 trading days or its trading will be suspended. Recently, the company’s stock, which has been largely traded on the margins, broke its price daily upper limit seven times in the last eight trading days and saw its value rise by over 40 percent.

Our take:
Major shareholders in China could be thinking of or taking steps to dump newly unrestricted shares in the wake of a worsening economy and slumping market confidence. This phenomenon seems to have prompted the Chinese Communist Party to float a trial balloon about getting the PBoC to rescue the markets.

1. Panic has sunk in the Chinese markets with the deterioration of the economy and poor prospects. China’s A shares dropped to four-year lows in the first couple of trading days of 2019.

If the CCP is unable to rescue market confidence before the Lunar New Year, the stock markets are in danger of collapse. Market collapse would in turn trigger financial risks, and the regime would be endangered. It is in this context that the idea of the central bank buying domestic stocks is being floated.

2. We previously analyzed that China is facing economic problems because corporate tax is suffocatingly high. The CCP regime, however, cannot enact substantial tax cuts to save the economy without weakening its grip on power (tax dollars are needed for “stability maintenance” works, keeping a bloated bureaucracy loyal to the Party, etc.). Indeed, the CCP’s recent so-called “tax reduction” measures end up ultimately increasing the tax burden for companies.

3. We believe that article carried in the China Securities Journal about the PBoC buying and holding over a trillion yuan of domestic stock could be a CCP trial balloon to test market reaction to the move. If there are no strong opposing voices, the CCP could go ahead and introduce a policy to make the move a reality.

4. While Chinese investors may want the central bank to rescue the markets, we believe that the move is at best a short-term “solution.” Per CCP characteristics, the PBoC will end up becoming an untrustworthy “big banker” in the casino-like Chinese stock markets. In the long-run, a majority of investors can expect to lose with the central bank’s entry into the markets.