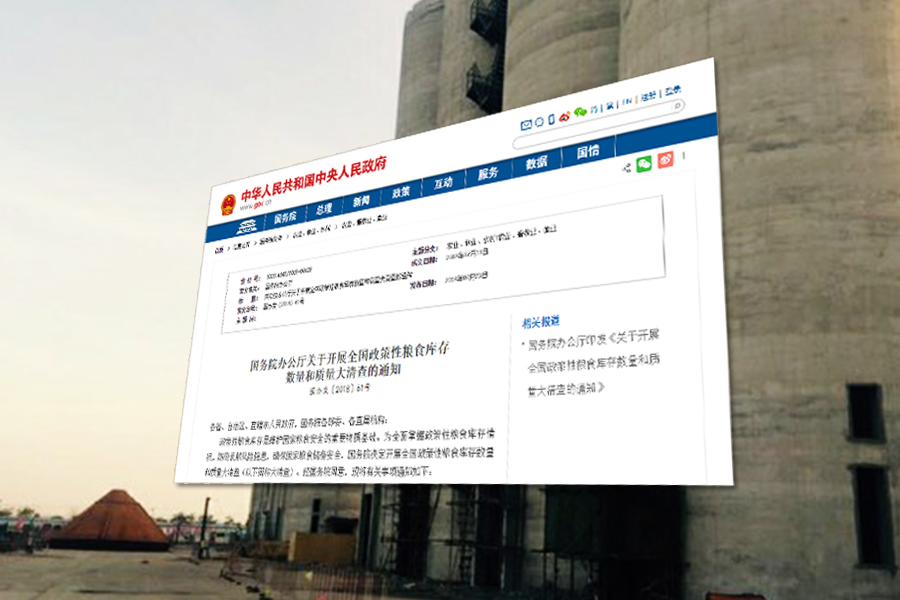 At 8 a.m. on July 29, a fire broke out in the No. 1 warehouse of Datong Grain Reserve in the northeastern province of Jilin. The warehouse contained 9,417 tons of corn, of which 40 tons were destroyed by fire and 540 tons by water damage.

Just six days prior, the General Office of the State Council had issued a notice on inspecting the quantity and quality of grain stocks in China. Ten provinces—Anhui, Fujian, Jiangxi, Henan, Hebei, Hunan, Guangdong, Guizhou, Shaanxi, Gansu, but not Jilin—were up for a round of inspection which is scheduled from the second half of 2018 to March 2019. The staff of Datong Grain Reserve told Chinese media that there was no link between the fire at its warehouse and the General Office notice.

The backdrop:
1. In the afternoon of May 31, 2013, a large fire broke out in the warehouse of a direct subsidiary of Sinograin’s Heilongjiang branch in Lindian County. The fire damaged a total of 78 granaries containing 47,000 tons of grain (34,000 tons of corn, 13,000 tons of rice). A circuit box short circuit reportedly sparked the fire.

Four days before the fire, the central first inspection team was assigned to Sinograin’s headquarters to conduct inspections.

2. On Aug. 17, 2013, 110 Chinese officials from Sinograin’s Henan branch capitalized on national grain acquisition policy to sell off over 3 million tons of food and make away with over 700 million yuan, according to state media. The corruption case exposed the gaping loopholes in Sinograin’s operation and supervision of China’s food reserves.

3. In 2015, the Hainan Audit Office investigated 34 grain reserve companies and found that the first had misappropriated funds of up to 1.79 billion yuan. Twenty-seven of those companies had swapped out 130,700 tons of grain for fake grain, and defrauded the state of 13.2575 million yuan in subsidies. Also, several grain reserve companies in Hainan had tried to pass off 9419.75 tons of older grain as fresh grain; traded 36,200 tons of “virtual grain” (grain that exists on the books only); “transferred” 19,100 tons of grain through fraudulent accounting; and defrauded the Agricultural Development Bank of China of 227 million yuan of low-interest loans.

4. As of July 31, 2018, China’s summer grain purchases (domestic only) have fallen by nearly 35 percent from a year ago. Henan, a grain production province, saw its grain purchases decrease by over 55 percent.

The big picture:
In July, China imposed 25 percent retaliatory tariffs on $34 billion worth of U.S. goods, including agricultural products like soybeans. Afterward, the renminbi exchange rate plummeted to nearly 6.9 to the U.S., and the markets anticipate that the renminbi would fall below the 7 mark.

Our take:
1. Based on our research and understanding of Chinese Communist Party (CCP) cadres and corruption, we believe that the fire at Datong Grain Reserve is very likely the work of local officials seeking to destroy evidence of corruption.

According to China’s criminal law, grain clerks would at worst be charged with “dereliction of duty” if “accidental” fire destroys grain reserves. Guilty officials face no more than three years in prison under normal circumstances and a maximum of seven years in the most severe cases. Conversely, the highest penalty for corruption is the death sentence.

2. From a technical standpoint, there is almost zero probability of destructive fire accidents occurring in China’s grain warehouses—if official protocol is followed and proper equipment is installed, of course.

According to state media reports, the temperature and humidity of all grain warehouses are monitored and controlled by computer. Grain is stored in silos that utilize a closed-loop fumigation system to deal with pests and recirculate air. Thus, the grains will not catch fire under normal circumstances. And should a fire break out, automated sprinklers should be able to extinguish the flames within five seconds.

In an Oct. 20, 2017 report, state mouthpiece Xinhuanet noted that grain warehouses that are directly subordinated to Sinograin use an intelligent grain storage monitoring system with high-definition cameras trained at all areas of the warehouses. Sinograin also developed nitrogen gas regulation and internal air circulation technologies to resolve temperature control issues. Nitrogen is used in pest control and fire extinguishing.

3. The Sino-U.S. trade conflict will reveal more instances of corruption in China’s food supply system, and expose a food crisis.

Chinese local governments sell more and more land every year for property development at the expense of arable land. In 2017, there was only 112.22 million hectares (1.683 billion mu) of available land for grain production, or 815,000 hectares less than 2016. In other words, agricultural land in China today is less than the 120 million hectares set by the CCP.

Despite having lesser arable land and more severe ecological disasters, official grain data shows a bumper crop every year (see Table 2). Local officials have incentive to show that they have a good harvest because they can receive food subsidies from the central government. Methods used by local governments to cheat the central government include purchasing low-cost older grains and passing it off as fresh grains before selling off the older grains as such a year later, or completely fabricating data. Barring war or major disaster, such methods of deception usually escape detection.

With the outbreak of the Sino-U.S. trade war, CCP grain officials are realizing that the game is up. China’s summer grain purchases fell by nearly 35 percent in H1 2018 (see Table 1) even though there are few severe ecological issues this year. With currency depreciation, a shortage of foreign exchange reserves, and lesser food imports, officials cannot find enough low-cost grains to continue their fraud. Thus, officials dare not fabricate “bumper crops” and have to set fire to granaries to hide their crimes before the central government inspection teams arrive.