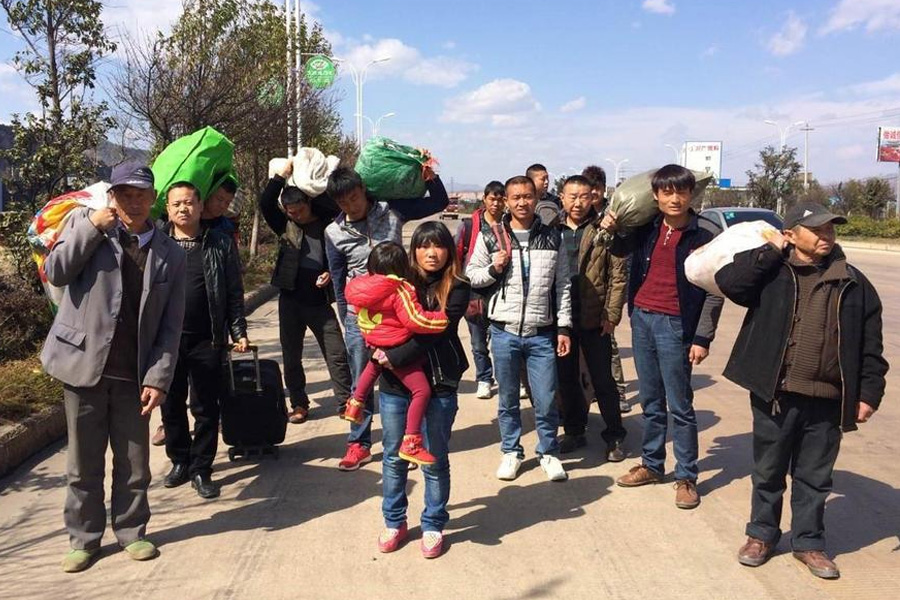 ◎ The CCP’s claim that migrants workers are returning home to partake in “entrepreneurship” is likely an attempt to put a positive spin on rising unemployment.

According to the macroeconomic, financial, and fiscal data released by the Chinese authorities on Nov. 13 and Nov. 14, China’s economy worsened significantly in October, with key metrics like industrial production and social financing falling below market expectations. The poor economic performance across the board suggests that the Sino-U.S. trade war is taking its toll.

The Chinese Communist Party has downplayed its “guo jin min tui” (“the state advances, the private sector retreats”) economic policy in favor of promoting private enterprise as China’s economy worsens. The policy shift, however, does not appear to have stemmed rising corporate failures and unemployment. With the trade war and escalating China-U.S. tensions, the CCP is facing an unprecedented political crisis.

The backdrop:
China’s economy noticeably slowed in October per data released by China’s National Bureau of Statistics, Ministry of Finance, and the People’s Bank of China:

The big picture:
According to a Nov. 13 column in The Washington Post, U.S. Vice President Mike Pence said that China “must fundamentally change its behavior” if it wants to “avoid an all-out cold war with the United States and its partners.” Pence also told the columnist that the U.S. can “more than double” existing tariffs and “escalate economic, diplomatic and political pressure on China” if Beijing does not make “significant and concrete concessions.”

The following day, Western media outlets reported that China had provided the U.S. with written responses to the Trump administration’s trade asks. Sources of news outlets said that the Chinese responses were largely a rehash of previous commitments. In other words, Beijing does not appear to be willing to make the sort of structural reform demanded by Washington. “They are not close to a favorable deal on trade. Not in the same universe,” a source told Reuters.

On Nov. 20, White House economic advisor Larry Kudlow told Fox News that President Donald Trump told him on a “number of occasions any deal between the two countries has got to be in American interests without any question.

Our take:
1. October was a bad month for the Chinese economy. Aside from the poor economic numbers above, Chinese companies are reportedly going into “spontaneous austerity,” and the country is seeing negative growth for the first time. The deterioration of the Chinese economy also appears to be accelerated by the Sino-U.S. trade war.

The economy’s dismal performance has resulted in rising unemployment and a wave of business closures this year. Examples of well-known companies that have folded in 2018 include:

The number of business closures may be much higher than the 5.04 million reported by Netease by the end of the year. On Oct. 20, Sohu.com reported that the advertisements page of a recent edition of the Shenzhen Economic Daily broadsheet was crammed full of liquidation announcements by local companies. The report noted several reasons for the mass closure of enterprises, including business owners looking to avoid social security and taxation penalties that go into effect in January 2019 due to a July reform or entertainment companies trying to comply with tougher scrutiny of their tax payments following the Fan Bingbing scandal (for deeper analysis on the social security and taxation changes, see our September article).

In October 2018, prominent Chinese economist He Qinglian used data issued by the National Bureau of Statistics on March 14 to estimate that the real unemployment rate in China is over 22 percent. He’s estimate is within range of an earlier estimate by the Xinghuo Journalists’ Alliance (星火記者聯盟) in June 2017; Xinghuo’s report, “China’s Unemployment Rate, the Truth is Being Covered Up,” concluded that the real unemployment rate could be as high as 22.9 percent.

The CCP regime, however, continues to issue incredulously consistent unemployment rates despite the obviously weakening economy. According to recent data from the National Bureau of Statistics, China’s urban unemployment rate in October was 4.9 percent, or the same rate as in September. The statistics bureau notes that national unemployment rate has kept steady at between 4 percent and 4.3 percent in the 2000s.

The CCP seems to have been preparing for the rise of rural “entrepreneurship” for a while. The State Council has issued guidelines promoting “entrepreneurship and innovation” in rural areas every year since 2015. In January 2018, a State Council meeting chaired by premier Li Keqiang announced that rural startups will get more public financial support, a move which overseas commentators described as “Xi Jinping’s Down to the Countryside Movement.” Meanwhile, a Jan. 18 China Daily report noted that seven million people (68.5 percent returning migrants) had gone home to rural areas to embark on “entrepreneurship” since September 2017, and that the “entrepreneurs” were on average 44.3 years old. In contrast, there was a total of 38.4 million “entrepreneurs” of average age 40 in the rural areas by November 2018, according to the agricultural ministry. The trend of “entrepreneurs” looks to exacerbate in the future given the double-digit “new entrepreneurs” growth rate as cited by China’s rural industry development department director Zeng Yande.

While the “returning entrepreneurs” may have actually found jobs or created “startups” in rural China, their condition will almost certainly be a step down from those in the urban areas. Many Chinese leave their rural hometowns for the cities in the first place due to the under-developed agricultural economy and lower standards of living. In the cities, migrant workers struggle to pay ever-increasing rental prices, look for jobs, or keep their work when firms close due to the economic downturn. Things got even harder for rural migrants in late 2017 when first and second-tier cities started implementing policies to drive out the “low-end population,” a term which usually means migrant workers. Upon returning home, many find that they have lost their land or possess no farming skills. Finally, because the economy in rural areas is poorer than in the cities, those areas will find it difficult to meet increasing employment needs.

Earlier in the year, a National Bureau of Statistics official offered a glimpse at China’s dire unemployment situation. On March 14, a statistic bureau spokesman said at a press conference that there are over 900 million people of working age in China, but only a total of 776 million jobs. Meanwhile, China is expected to produce a record 8.2 million university graduates in 2018, as well as 5 million graduates of vocational institutes. The spokesman also noted that the job-seeking crowd would be bolstered by “transfer workers” following a reduction of excessive production capacity and rural migrant workers moving to the cities.

Going by the numbers above, there are 124 million people of working age in China that may not be employed at the moment. Add 13.2 million graduates, the “transfer workers” who are out of job due to the CCP’s supply-side reform, retrenched workers from companies going bust, and increased urban populations, and Beijing faces an unemployment crisis. China’s unemployment woes will likely worsen with the escalating Sino-U.S. trade war and rising geopolitical tensions.

What’s next:
We believe that the business failure and unemployment trends listed above will only intensify, especially when U.S. tariff rates increase to 25 percent in January 2019 and if President Trump adds another $267 billion of tariffs.

The knock-on effect of companies closing and people losing their jobs in higher numbers include, but are not limited to:

Unless Beijing finds a way to enact reforms, the effects of a deteriorating economy greatly raise the levels of political risk facing the CCP regime. (For analysis of Xi Jinping’s ability to reform, see here and here.)