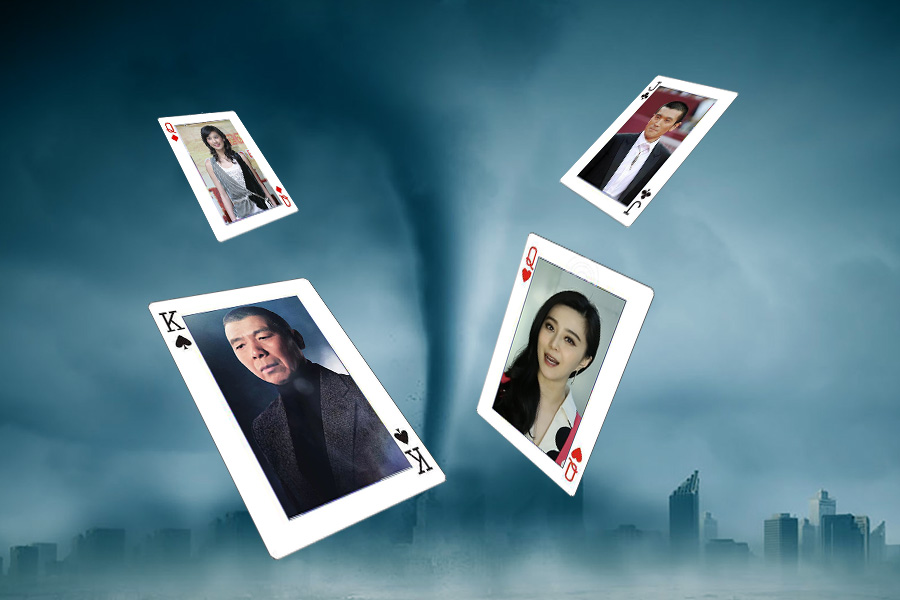 ◎ Xi now appears to be closing in on the entertainment industry.

Meanwhile, Chinese state media has been steering public opinion on the issue of tax evasion since the tax authorities announced a probe into double-contracting in the wake of allegations against Fan.

The backdrop:
June 3: China’s State Administration of Taxation instructed the tax authorities in Jiangsu to investigate the issue of “yin-yang contracts” in the entertainment industry.

The People’s Daily also started to get involved in the issue of Chinese film stars engaging in double-contracting via two short commentaries on its official Weibo account. One of the commentaries noted that “everybody is equal before the law,” and that no one should enjoy “special privileges” because of their reputation, the size of their fanbase, and their “broad networks.”

June 5: The taxation authorities in Jiangsu’s Wuxi City meet Cui Yongyuan in a scheduled interview to collect from him documents which he claimed are “yin-yang contracts” signed by Fan Bingbing. Wuxi is where Fan’s personal film studio is based.

June 6: In a commentary piece on the Fan Bingbing scandal, the Supreme People’s Procuratorate newspaper Procuratorial Daily wrote: “During this period of strict investigation, the skeletons must be brought out from the closet.”

In a Weibo post, Cui Yongyuan alleged that film director Feng Xiaogang had come to own two properties in Los Angeles worth $10 million each as a result of double-contracting.

According to an article on Sina, Chinese film stars and movie studios have long been profiting from fraudulent financial activities like: Market manipulation; using mergers and acquisitions to engage in tunneling; and driving up the prices of securities and China Concepts Stocks through stock manipulation. The Sina article names well-known film studios like Zhejiang Talent and Huayi Brothers as being among the bad actors.

The big picture:
China is presently facing a severe financial crisis. While Beijing has been deleveraging since the second half of 2017, several companies have recently defaulted on bonds and people are frantically snapping up property despite sky-high property prices.

Other signs of financial trouble include China’s foreign reserves falling for two months straight and the central bank expanding the guarantee scope of its medium-term lending facility to include “junk” bonds.

Our take:
1. Cui Yongyuan’s entertainment sector exposé could be entirely incidental. But the Xi Jinping administration appears to have seized on Cui’s allegations and revelations to launch a tax probe and clean out the entertainment industry. The entertainment industry sweep also diverts the public’s attention away from the Sino-U.S. trade discussions, which have not been going well for China.

2. Xi Jinping has spent most of his first term in office rectifying the Party and government institution of the Jiang Zemin faction’s influence. Now it appears that he is closing in on the entertainment industry.

Politically, Xi is ready to tackle entertainment. At the 19th Party Congress, Xi successfully installed officials whom he trusts into key positions in the Chinese Communist Party (CCP) propaganda apparatus, which the Jiang faction had long controlled. Following sweeping state institutional reforms at the Two Sessions in March, state media and the film and media authorities were placed under the Propaganda Department’s control.

3. China’s entertainment industry has always been an area where government and underworld forces intersect. Many of the prominent film stars and movie studios today made their fame and fortune over the past two decades, or a period which roughly corresponds to Jiang’s era of dominance in the Chinese regime.

Chinese state media recently hinted that it is now time to draw the curtains on film stars and studios that enjoyed a monopoly of fortune and fame during the Jiang era. In a Weibo post on June 4, the People’s Daily argued that China’s entertainment sector is an oligopoly that is heavily reliant on a handful of famous actors and big capital investments. This “structural imbalance” has thus prevented smaller productions and lesser-known artists from flourishing. The People’s Daily post suggests that the Xi Jinping camp is looking to purge Jiang-era stars and studios. After the purge, the Xi camp could groom new film stars to serve its propaganda purposes.

4. Apart from being a convenient way to rotate out older artists for young blood, the entertainment industry tax evasion probe could be an excuse for the Xi administration to confiscate the wealth of corruption individuals or movie studios to replenish the national coffers.