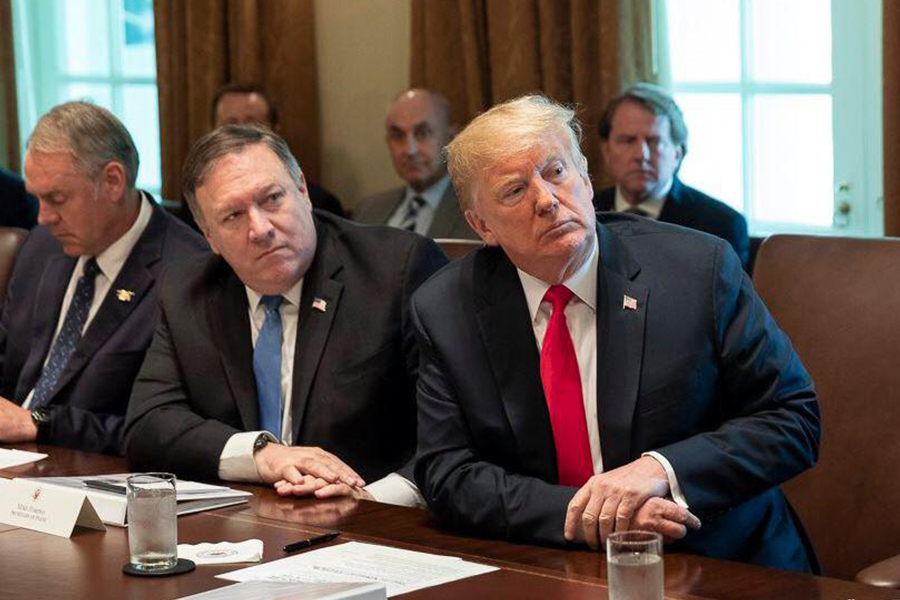 ◎ The Trump administration must utilize creative strategies and tactics to counter CCP propaganda and come out ahead on trade and North Korea.

On Aug. 24, President Donald Trump announced what could be a freeze in denuclearization talks between the United States, North Korea, and other parties.

In a thread on Twitter, Trump wrote: “I have asked Secretary of State Mike Pompeo not to go to North Korea, at this time, because I feel we are not making sufficient progress with respect to the denuclearization of the Korean Peninsula … Additionally, because of our much tougher Trading stance with China, I do not believe they are helping with the process of denuclearization as they once were (despite the UN Sanctions which are in place) … Secretary Pompeo looks forward to going to North Korea in the near future, most likely after our Trading relationship with China is resolved. In the meantime I would like to send my warmest regards and respect to Chairman Kim. I look forward to seeing him soon!”

Trump’s tweets affirm our June 15 analysis of the People’s Republic of China’s (PRC) pivotal role in ensuring the successful denuclearization of the Democratic Republic of Korea (DPRK). The tweets and the lack of visible progress at a recent meeting of PRC and U.S. trade officials also point toward the coming escalation of the Sino-U.S. trade dispute.

The backdrop:
Before Trump’s Aug. 24 announcement, there were promising signs of America and the two Koreas building trust and quietly progressing on the path towards peace and full denuclearization.

We earlier analyzed that the denuclearization of the Korean Peninsula and the signing of a peace treaty hinges on mutual trust between the U.S. and the DPRK.

South Korea
In late July, senior South Korean officials talked about ending the Korean War “at the earliest possible date” and “within the year.” The officials noted that consultations on the topic were underway between the U.S., North Korea, and South Korea. Kang Kyung-wha, South Korea’s foreign ministry, floated the idea of declaring the end of the Korean War at the United Nations General Assembly in September.

North Korea
Kim Jong Un has been touring factories and farms in North Korea since the Singapore Summit in June, likely to project the impression that he is focused on economic rebuilding. The lack of missile or nuclear tests in nine months adds to the impression that Kim is truly shifting away from the “byungjin” dual-track policy of developing nuclear weapons and the economy as he announced at a key political conclave in April.

Kim has also taken concrete steps to fulfill commitments made at the Singapore Summit in June.

On July 27, 55 cases containing the remains of U.S. war dead and a dog tag arrived in Osan Air Base in Pyeongtaek, South Korea. Forensic analysis indicated that the remains were likely those of American servicemen. The remains were later flown to Hawaii on Aug. 1 and received by Vice President Mike Pence.

America
Speaking at the Aspen Security Forum on July 22 about North Korea denuclearization and peace, General Vincent Brooks, U.S. forces commander in Korea, noted that “the lack of trust is the enemy we now have to defeat.”

Meanwhile, the appointment of Stephen Biegun as special envoy to North Korea suggests that the U.S. anticipates increased interaction with the DPRK beyond what Secretary Pompeo can personally undertake. Biegun’s private sector background also hints at future discussions with North Korea that could involve details about U.S. private sector investment after the country abandons its nuclear weapons, a point that Pompeo raised in a television interview in May.

Our take:
1) On June 15, we detailed in an article the potentially dire implications of U.S. tariffs on Chinese goods which President Trump announced after the Singapore Summit. In our analysis, we noted that Chinese Communist Party (CCP) political culture dictates that Xi Jinping would have to retaliate to Trump’s tariffs or “face serious challenges to his rule from rivals and the system.” Retaliation could take the form of “relaxing sanctions and secretly playing up Pyongyang’s suspicions of the U.S.”

Trump’s latest tweets and the recent rumors that Xi and his allies have been challenged by political rivals prove that our June 15 analysis is accurate.

Trump’s remark about sending Pompeo to North Korea “most likely after our Trading relationship with China is resolved” suggests that he now recognizes the PRC’s pivotal role in North Korean affairs. Going forward, the Trump administration would likely escalate the Sino-U.S. trade war through methods such as applying tariffs on all Chinese exports to America. The Trump administration could even apply pressure to the PRC on non-trade fronts.

2) Details of the latest round of Sino-U.S. trade talks suggest that the CCP is still misreading America’s China policy revolution.

According to The Wall Street Journal, Chinese officials had divided U.S. trade demands into three buckets, namely, China purchasing additional U.S. goods (30-40 percent); market openings and greater foreign investment in China (30-40 percent); and U.S. demands for China to change its industrial policy (20-40 percent). The PRC believes that the first bucket of demands can be met immediately, while demands in the second bucket would take years to negotiate. The PRC refuses to negotiate most of the demands in the third bucket “because of national security or political reasons.”

The WSJ wrote: “U.S. officials said they believed this accounting underscored that the Chinese didn’t understand U.S. priorities, especially when it came to protecting intellectual property.”

If the CCP had realized the full implications of America’s tough stance on China (recent media reports suggest that the CCP is gradually dawning on the fact), the Chinese officials might not have proposed the three buckets. Instead, the CCP seems to be hoping that the U.S. midterm elections in November and the special counsel investigations could create favorable conditions for the PRC to renegotiate trade with America. As we laid out in an earlier article, America’s policy shift on China should stay regardless of a “blue wave” or “red wave” in November.

What’s next:
Barring unforeseen circumstances, neither the U.S. nor the PRC is likely to blink on North Korea or the trade dispute.

China’s economy is worsening, and the CCP cannot withstand a trade war with America. However, the CCP would still very likely mobilize its propaganda assets to swing the narrative of the trade dispute in its favor. National Security Advisor John Bolton said in an interview with ABC on Aug. 19 that the U.S. government is concerned about election inference from four countries, including China.

The Trump administration must utilize creative strategies and tactics to counter CCP propaganda and come out ahead on trade and North Korea.