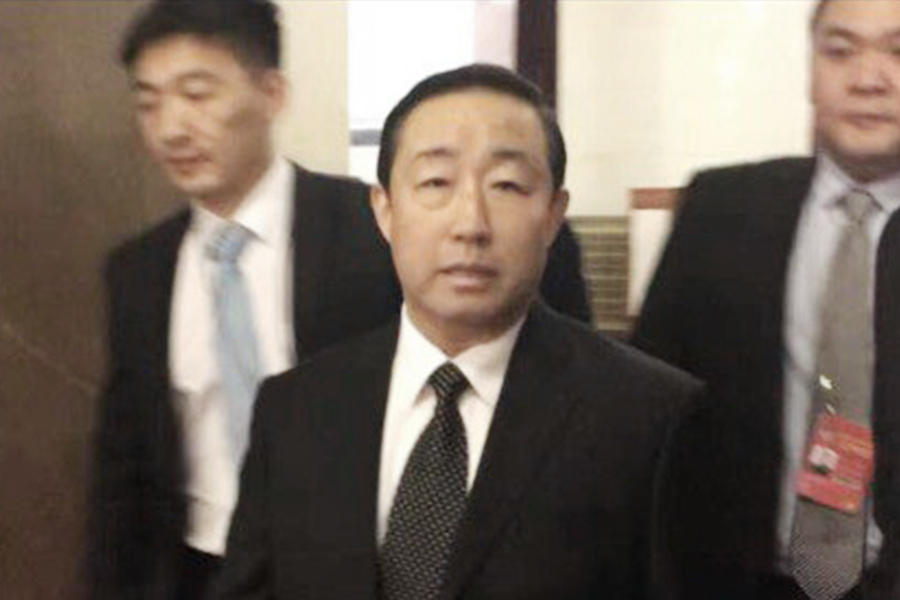 The Two Sessions personnel reshuffle saw some shock moves, including the appointment of Yang Xiaodu as National Supervision Commission director, Yi Gang as central bank chief, and Yang Jiechi not being named to any state job.

The promotion of Fu Zhenghua, the former public security vice minister, to Ministry of Justice head is another move that puzzled observers. When he was in law enforcement, Fu oversaw several cases of gross human rights abuse. He also once headed the “610 Office,” which coordinates the persecution of the Falun Gong spiritual community.

Chinese dissidents and human rights workers are very concerned that the Fu’s appointment as justice minister will result in a regression in the use of the legal system to defend against rights abuses.

We believe that there is reason to be worried about rights abuses under Fu Zhenghua given the authoritarian nature of the Chinese regime. However, it appears that institutional safeguards have been put in place to check the Ministry of Justice against excesses. Also, Fu is currently on the knife’s edge given the state of the factional struggle (neidou) in the Chinese Communist Party (CCP).

Fu Zhenghua: A brief factional background
Fu Zhenghua served in the Beijing Municipal Public Security Bureau (BPSB) for several years, and eventually headed the bureau from 2010 to 2013. The Jiang Zemin faction has long swayed the BPSB, and Fu can be regarded as a typical Jiang factional official.

Fu, however, appears to have switched sides in the CCP factional struggle before the 18th Party Congress. According to news reports in Chinese language publications, Fu the “turncoat” proved his loyalty to Hu Jintao by helping him thwart an armed police coup in Beijing in March 2012 led by then-Central Political and Legal Affairs secretary Zhou Yongkang. Zhou launched the coup four days after fellow Jiang faction member and Chongqing chief Bo Xilai was purged. The coup was first acknowledged by the Xi Jinping leadership in 2016 when a book of Xi’s speeches criticized Bo, Zhou, and others of attempting to “wreck and split the Party.” More recently, securities regulator Liu Shiyu and CCP General Office director Ding Xuexiang condemned high-ranking officials of having sought to “usurp the Party leadership.” (For more on the coups, see here, here, and here.)

Fu Zhenghua seemed to have been rewarded for “defecting” from Xi’s factional rivals. In August 2013, he was promoted to vice minister of the Ministry of Public Security. He later led the investigation of Zhou Yongkang and other Jiang faction officials. In May 2016, Fu was promoted again to executive vice minister.

But Xi never appeared to trust “turncoat” Fu completely, and Fu never seemed to have fully distanced himself from the Jiang faction. CCP factional struggle is a convoluted and consequential affair. The actions taken by individuals entangled in the struggle can sometimes appear counterintuitive, but could actually be Machiavellian measures aimed at serving larger factional goals. Fu Zhenghua’s case is a model example of factional politics in play.

Going by Xi Jinping’s statements about the “Lei Yang Incident” in May 2016, it appeared that he was planning to use the case to rectify the public security apparatus.[1] However, Xi seemed to have reconsidered the plan after two strange incidents that year. First, about ten thousand military veterans suddenly assembled outside the military headquarters in Beijing to petition the government about unpaid benefits.[2] Second, 4,000 BPSB officers threatened to resign over the arrest of their fellows who were involved in the “Lei Yang Incident.” Fu Zhenghua is said to be behind the attempted mass resignation. Both strange incidents demonstrated to Xi that the BPSB plays a crucial role in “stability maintenance” work and cannot be casually admonished or overhauled.

In January 2017, fugitive Chinese tycoon Guo Wengui started accusing Fu Zhenghua of corruption, abusing power, and “doing as he pleases” on Twitter and Youtube videos. Subsequently, Fu attended the Two Sessions meeting heavily escorted by a security detail. Going by the schedule on the Ministry of Public Security website, he also participated in an unusually low number of public security activities between 2016 to 2017. 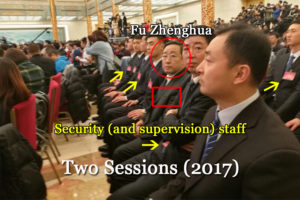 Fu Zhenghua’s position looked very shaky going into the 2018 Two Sessions. His being named as justice minister, however, suggests that Xi still has uses for Fu’s ruthless handling of old allies.

Cleaning up the security and legal affairs apparatus
Over the past two years, Xi Jinping has made slow progress in cleaning up the domestic security and legal affairs apparatus, including the justice ministry. The recent Party and state institutional reforms and Fu Zhenghua’s appointment as justice minister seem to be aimed at hastening the cleansing progress.

Oct. 2017: Wu Aiying was officially expelled from the Party at the 7th Plenum of the 18th Central Committee.

Jan. 24, 2018: The 19th Central Committee and the State Council jointly launched an anti-organized crime campaign. We believe that this campaign is aimed at rectifying the domestic security and legal apparatus. (Link)

Jan. 30, 2018: Wang Xiaohong, the deputy mayor of Beijing and fourth-rank public security vice minister, left his Beijing post, a move which foreshadows a future job change. Earlier at the 19th Congress, Wang, an official whom Xi trusts, was catapulted into the Central Committee despite his non-elite (shuangfei) status.

March 21, 2018: According to the plan for Party and state institutional reforms, the administrative office of the new Advancing Law-based Governance Leading Group will be situated in the Ministry of Justice.

As part of state institutional reform, the Legislative Affairs Office is dissolved and its functions integrated into the justice ministry.

Many birds, one stone
Taking the macro view, Xi Jinping’s appointment of Fu Zhenghua and other recent personnel moves appear to be aimed at eliminating the remaining Jiang faction elements in the domestic security and legal apparatus:

2. Going by the functions of the post-reform Ministry of Justice, Fu Zhenghua’s authority has been greatly weakened. Also, he is only the justice ministry’s deputy Party secretary; Yuan Shuhong, the former deputy director of the Legislative Affairs Office, is Party secretary. By the “Party leads everything” power structure, Yuan is Fu’s “supervisor.”

3. Fu’s movements will be further checked with the Advancing Law-based Governance Leading Group administrative office being located in the Ministry of Justice. Because the Leading Group will be headed by either Xi Jinping or Xi ally Li Zhanshu, Fu will find a pair of very high-ranking eyes watching over what he does as justice minister.

4. As public security vice minister, Fu has proven to be merciless in rounding up his old allies in the Jiang faction. We believe that Xi may seek to turn Fu loose against the dark characters running China’s prisons.

The justice ministry oversees the prisons, which are infamous sites of torture, abuse, and other human rights violations. During Xi’s first term, however, the purge of prison officials was nothing to shout about. To demonstrate his loyalty to Xi and preserve his career, Fu could carry out a rigorous sweep of the prisons and the justice apparatus.

5. Fu Zhenghua’s promotion is a strike against Guo Wengui, the Chinese tycoon who is hiding out in the U.S.

Guo seems to be a chess piece in the factional struggle between Xi Jinping and the Jiang faction. Before the 19th Congress, he sought to attack the Xi administration through criticizing Fu Zhenghua and “exposing” top Xi ally Wang Qishan. Guo’s move against Wang appeared to be aimed at forcing Xi to drop the idea of retaining Wang in a senior leadership position. However, Wang has since become vice president (and could potentially stay on in power indefinitely) and Fu is justice minister. If anything, Guo’s “exposés” have lost value.

CCP factional struggles are complicated affairs. Without an understanding of factional relations, it would be very difficult to detect CCP disinformation and misinformation. (See “A Warning About Guo Wengui” and “Decoding China’s ‘Secret Document’ on North Korea”)

6. We believe that Fu Zhenghua’s promotion doesn’t guarantee his safety. In fact, he is at high risk of being investigated, and could very well be purged the moment he shows signs of disloyalty in his new position.

7. The Ministry of Justice manages Chinese lawyers. There is a very good chance that the situation for human rights lawyers could deteriorate with Fu in charge as he strives to curb signs of disloyalty to “Party core” Xi, i.e., rights lawyers openly criticizing Xi’s rule.

[1] Lei Yang, a Chinese environmentalist, was arrested by five Beijing police in a case of “mistaken identity,” and was later to have died in police custody of unnatural causes. Lei’s death sparked a huge public uproar, and Xi Jinping seemed to speak up on behalf of him and against his treatment by the police in public speeches. The English edition of People’s Daily even ran a commentary piece calling on police officers to listen to Xi and not to “exploit powers in the name of law enforcement.” The official statements indicated that Xi was intent on using Lei Yang’s case to clean up the domestic security apparatus.

[2] The BPSB almost certainly had a hand in allowing the military veterans’ protest to happen; a gathering of ten thousand people cannot easily escape the scrutiny of security officials. In other words, the Beijing security officials were sending a message to Xi: Without us protecting Beijing, the CCP leadership is endangered.