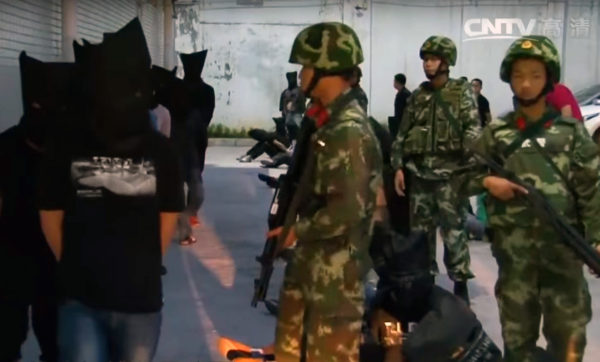 ◎ The new anti-organized crime campaign is likely aimed at sending a strong political signal and not merely addressing a common societal problem as in the earlier campaign.

The Chinese Communist Party (CCP) Central Committee and the State Council issued a document on Jan. 24 to launch a special campaign against organized crime.

The document called for a crackdown on “malevolent and corrupt forces” and the swatting of “flies at the grassroots” (the term “flies” refers to low-level officials who engage in corrupt activity). The document also called for the punishing of officials who put up “protective umbrellas” over mobsters and for the forming of “overwhelming momentum” against criminal organizations.

On the same day that the document was released, state mouthpiece Xinhua published an essay aimed at shaping favorable public opinion towards the campaign. The Xinhua piece raised several points:

2) The “hitting black” campaign of the past focused on cracking down on crime, while the emphasis on “sweeping black” is the strengthening of government at the grassroots and the clamping down on crime on a broader scale.

3) The earlier “hitting black” campaign placed too much emphasis on cracking down on gangs and not on preventing their formation.

Why it matters: The new anti-organized crime campaign is likely aimed at sending a strong political signal and not merely addressing a common societal problem as in the earlier campaign.

Our take: Xi Jinping is taking the fight to the Jiang Zemin faction at the grassroots. His campaign is likely aimed at addressing several problems which first arose during the Jiang era.

1. Local mafia colludes with governments at the grassroots, take bribes, and frequently repress the local populace. The problems created by organized crime has escalated over the years and now threatens the political stability of the CCP regime.

2. Through breaking up collusive networks between local governments and the mafia, Xi Jinping could win the support of the people and alleviate social problems. By shifting the focal point of social tensions, the people would feel that the lawbreaking officials, and not the CCP system, is to blame for their troubles.

3. The campaign gives Xi an excuse to clean out the domestic law and security apparatus of Jiang faction influence. In recent weeks, many Political and Legal Affairs Commission (PLAC) officials were transferred to new positions in different regions, a move which prevents them from sheltering local mobs and facilitates the purge of gangsters.

4. The new National Supervisory Commission will have an opportunity to be put through its paces and accrue merit by supporting political reform via the anti-organized crime campaign.

5. With organized crime in retreat, the banking industry will be forced to shrink their support for usurious online lending platforms and restrict shadow banking activity, and instead, fund private enterprises that contribute to the real economy.

6. The underworld real estate business, which is built on illegally seizing land and demolishing buildings, will take a hit. Local governments will then be less likely to sell land to investors and developers at artificially low prices and indirectly prevent local debt from growing.

8. Human rights activists could be arrested in the name of curbing gangsters. Without potential protest organizers, local governments will be able to guard against large-scale human rights incidents.

Is the latest campaign like Bo Xilai’s “Singing Red, Hitting Black” in Chongqing?

1. Bo’s campaign was aimed at eliminating dissenters to his rule, expanding his network of supporters, and accruing funds for use in a coup against the Xi leadership. Xi’s campaign appears to be aimed at pushing through reform and creating an opportunity to eliminate the remaining Jiang faction elements in the security and legal apparatus.

In other words, Bo’s “hitting black” serves to advance his coup goals while Xi’s “sweeping black” seeks to restore order and consolidate his authority.

2. Both Bo and Xi’s anti-organized crime campaigns reflect the CCP’s style of repression.

Bo’s campaign, however, is distinctly Maoist. Chongqing residents were encouraged to sing Cultural Revolution-era songs, and the campaign inspired radical leftist elements in society to attack reform-minded persons and the wealthy.

While the Xi leadership has tightened CCP control over society, it has also quietly downplayed the Cultural Revolution and suppressed radical Maoist leftists. For instance, the 50th anniversary of the Cultural Revolution went uncelebrated, while the People’s Daily cautioned against repeating the “mistakes” of Mao’s revolution. The Xi administration is concerned that the Maoist radicals’ call for the poor to overthrow the wealthy would prove appealing in a society with a widening rich-poor gap.

3. As in all CCP campaigns, opportunists will seek to exploit the conditions created by the campaign to their benefit. Expect to see cases of local officials blackmailing legitimate enterprises, reappropriating private wealth, and improperly labeling innocents as criminals.