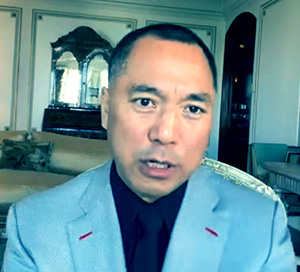 Controversial fugitive Chinese billionaire Guo Wengui is making headlines in Western media again, appearing in The New York Times, The Wall Street Journal, The Epoch Times, Washington Free Beacon and the Drudge Report. He is scheduled to speak in Washington D.C. on Oct. 4 at an event hosted by Bill Gertz of the Free Beacon.

Inconsistent and not credible: Guo is your typical elite Chinese businessman intertwined in Chinese Communist Party (CCP) politics and business. Guo’s accusations and claims against CCP officials are largely contradictory, unverifiable, and/or proven false. Other times, he may be presenting facts alongside fiction, rendering it impossible to tell one from the other.

Our take: Considering Guo’s inconsistencies and the timing of his appearances in Western media, as well as his upcoming event in D.C. scheduled exactly two weeks before the 19th Party Congress, it appears Guo is deeply involved in the power struggle between Xi’s administration and the Jiang faction. With the Western media paying close attention to him, he will likely target Wang Qishan at the D.C. event at the Hudson Institute, which will greatly benefit the Jiang faction. His claims, whatever they may be, will likely be detrimental to Xi and Wang, possibly diminishing U.S. trust in the Xi administration.

In the past, Guo has admitted to spying for the CCP; whether he still is a spy and to what extent, only Guo himself knows. Regardless, the act of spreading disinformation through Western media has been a common CCP spy tactic. Although Guo denies that he is a Jiang faction member, the information he releases is a pressure point against the Xi administration, especially at this critical juncture before the 19th Party Congress on Oct. 18.

If anyone at this point in time still buys into Guo Wengui’s claims, they may find themselves caught in an international controversy, just like the Voice of America.

Contact us for an in-depth report about Guo Wengui.