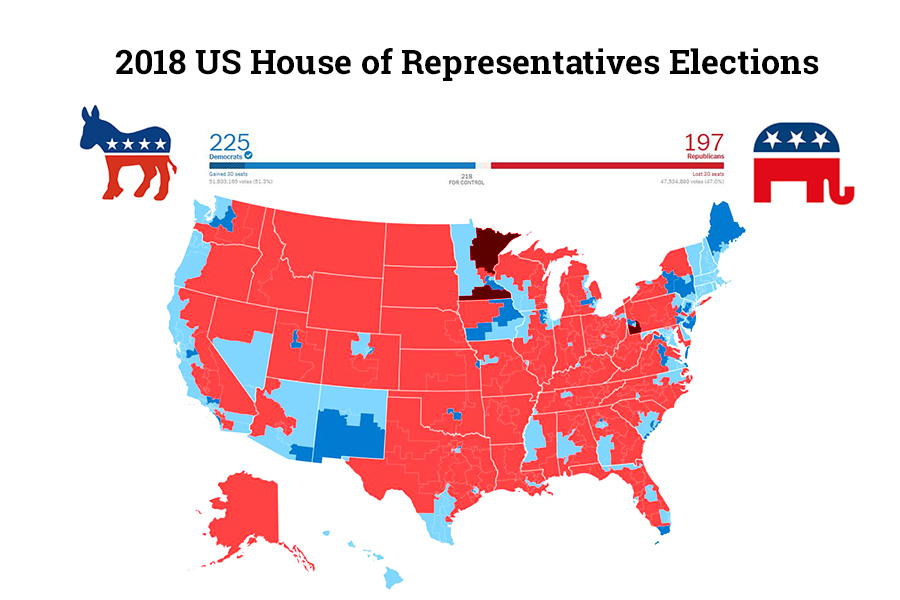 ◎ The midterm results should have little effect on influencing the Sino-U.S. trade war.

In August, we wrote that the Chinese Communist Party could be “gambling that U.S. domestic elections play out in a manner that allows it to avoid a consequential clash with America.”

A Nov. 7 China Daily report on the midterm results suggests that the CCP was hoping for a Democratic victory in the House of Representatives. The report appeared to suggest that the Democrats had won an uncharacteristically large number of House seats. The report also seemed to cheer on President Donald Trump’s “bitter setback,” noting that a Democrat majority in the House would allow them to “block Trump’s agenda and open his administration to intense scrutiny.”

The Democrats “also could force Trump to scale back his legislative ambitions, possibly dooming his promises to fund a border wall with Mexico, pass a second major tax-cut package or carry out his hardline policies on trade,” according to the China Daily report.

But did the CCP’s “gamble” on the midterm results work out?

Our take:
We touched on the U.S. midterm election results and what it means for the trade war, Sino-U.S. relations, and the CCP regime in our analysis of recent keynote speeches by Xi Jinping and Wang Qishan. In this article, we will briefly recap our earlier analysis and raise new points.

1. The midterm results will have negligible effect in preventing Trump from carrying out his “hardline policies on trade” with the People’s Republic of China.

Trump’s tariffs and the “Sino-U.S. trade war” are only one part of America’s China policy revolution, a point we have discussed at length in several articles (see here, here, and here). The White House, the Republican Party, and the Democratic Party all appear to be in sync on the issue of countering the CCP threat, which U.S. intelligence officials have described as the “broadest, most complicated, most long-term” (FBI director Christopher Wray) and “existential” (National Counterintelligence and Security Center director William Evanina).

In October, a bipartisan group of U.S. Senators released a resolution condemning the persecution of religious minorities in China. And Trump’s tariffs have bipartisan support in the Senate and the House; likely incoming House Speaker Nancy Pelosi issued strong statements of support for investigations and tariffs on China when they were announced. In fact, the CCP’s tariffs in the farming and Rust Belt regions, which were clearly intended to alienate voters from Trump, backfired when candidates that opposed Trump’s tariffs were defeated at the midterms while several of those who supported the tariffs won their races. Hence, a Democratic majority in the House will not change America’s broader policy shift on China.

If anything, a Democrat-controlled House could mean tougher China policies as lawmakers strive to hold the Trump administration accountable for the deals that are cut with the PRC. The ZTE ban is a case in point. Trump decided to alter a crippling business ban on ZTE as a favor to Xi Jinping, and the White House later explained that there were national security interests to maintain compliance incentives (we analyzed the seemingly counterintuitive move here). But lawmakers in the House and Senate were strongly opposed to Trump’s decision, and they tried unsuccessfully to reimpose the business ban on ZTE. A Democratic-majority House will likely guarantee that the Trump administration can never again undo tough sanctions on China once they are made, and may request even stricter sanctions if there are political benefits for doing so.

2. Legislative gridlock will likely cause Trump to put greater focus on executive action and foreign affairs.

China Daily rightly concluded that Democratic control of the House could force Trump to “scale back his legislative ambitions.” How much he has to “scale back,” however, is unclear at this stage. In a press conference a day after the midterms, Trump noted that he and the Democrats both want to work on “economic growth, infrastructure, trade, lowering the cost of prescription drugs,” and a “beautiful bipartisan type of situation” could potentially emerge. Indeed, it is politically advantageous for the Democrats to pass some legislature over the next two years to court moderate voters instead of purely resisting Trump to appeal to their new (and possibly fickle) political base.

Should legislative gridlock dominate proceedings in Congress, Trump could end up signing more executive orders as a workaround, especially on issues that he believes must be done. Trump may also very likely turn his attention away from legislation and focus on foreign affairs, such as the denuclearization of North Korea, finding ways to work with Russia in addressing the PRC’s belligerent activity, and dealing with CCP interference and influence in America and elsewhere. China Daily/the CCP may come to rue “celebrating” the legislative gridlock brought by a Democratic House.

3. The Democrats can impeach Trump with a simple House majority. But they might not want to do it.

Unless the Special Counsel investigation produces especially damning evidence of collusion between the Russian government and the Trump campaign, the Republican-majority Senate will unlikely vote to remove Trump from office. And the Democrats may not have anything else aside from the outcome of the Special Counsel investigation to move for impeachment.

Even if the Democrats do believe that they have Trump on an impeachable offense, they might not wish to go ahead given past precedent. The Republicans’ attempt to impeach Bill Clinton in 1998 ended up energizing Democratic voters and costing Republican seats in the House during the midterms then. And the Democrats do not want to energize Republican voters given their hopes of winning the 2020 presidential elections.

The CCP will unlikely be betting on the Democrats impeaching Trump as a means to slow down U.S. efforts to counter the PRC.

4. The midterm aftermath could give the CCP a case of “gambler’s conceit.” Gambler’s conceit is a fallacy where a gambler believes that he will stop a risky behavior while still engaging in it.

The CCP advances its agenda by creating and exploiting divides. To create and exploit divides abroad, the CCP utilizes influence operations and its Red Matrix. CCP influence and interference have recently come under the spotlight, but very few are aware of the Red Matrix’s existence and effects. Given the CCP’s modus operandi, Party nature, and the vast sums invested in its influence operations, the CCP, like the proverbial gambler, will keep rolling the influence and interference dice in the hopes of recuperating its “losses.”

From the CCP’s perspective, it has reason to hope that it may get lucky with the next dice cast. The midterm results reveal a more divided America populace. Meanwhile, America’s mediascape is becoming more polarized and news reports from trusted media outlets appear to be increasingly skewed by political agenda. Anti-Trump bias may be a reason why the press has paid less attention to, or even sought to downplay, the warnings of PRC interference by the White House, as well as U.S. intelligence, national security, and diplomatic agencies. Further, claims that Trump and his administration are “racists,” many of which were made in the lead up to midterm election day, gift the CCP material to craft inflammatory propaganda and disinformation narratives for target audiences in China and abroad. All in all, the political and information environment in America has become highly conducive for the CCP to operate in and exploit to its advantage.

The CCP, however, may not get lucky with the U.S. and its allies actively working to counter the many threats posed by the Communist Party. The application of effective counter-propaganda measures will greatly reduce the efficacy of CCP propaganda, disinformation, and influence operations. In this scenario, what may seem like opportunity and hope for the CCP may turn out to nothing more than a very costly and risky gamble.