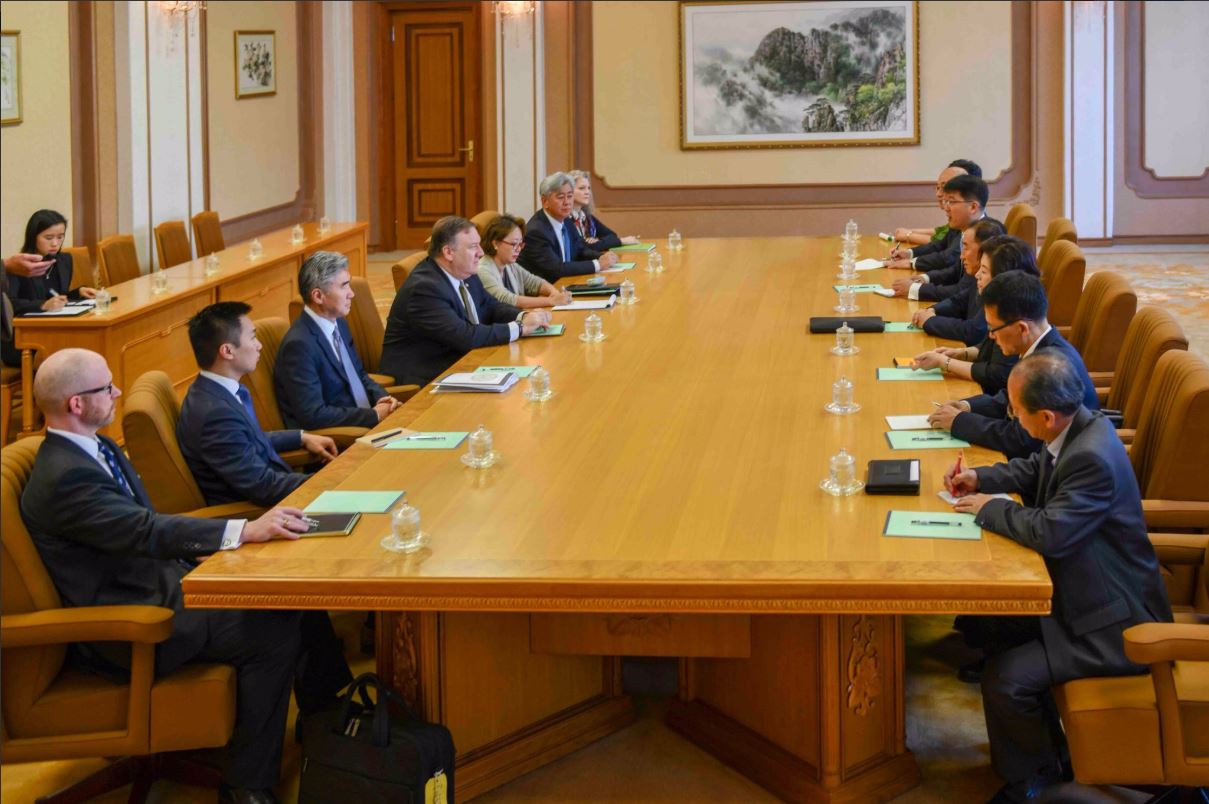 ◎ The timing and tempo of the U.S. strategies is vital to ensure mission success.

Before departing Pyongyang on July 7, United States Secretary of State Mike Pompeo said that the round of talks he had with General Kim Yong Chol, North Korean leader Kim Jong Un’s top lieutenant, were “productive” and held in “good faith.” He added that progress was made on “almost all of the central issues” of North Korean denuclearization.

Hours later, North Korea’s foreign ministry issued a statement describing the negotiation results as “regrettable.” The statement accused America of making “gangster-like” demands that may rattle Pyongyang’s “unshakable will for denuclearization.” The statement also suggested that both sides should take “simultaneous actions” to improve bilateral relations and end the Korean War in July on the anniversary of the armistice agreement.

Mainstream media and observers interpret North Korea’s statement and continued construction work at its nuclear and missile sites as signs of deep trouble for the denuclearization progress and U.S.-DPRK relations.

Official remarks by the U.S. and South Korea, however, suggest that there is more to the story beyond North Korea’s rhetoric. Cheong Wa Dae, the office of South Korean president Moon Jae-in, noted that while differences remain between America and North Korea, both sides “are in the process of reaching agreement on all issues, including a declaration of the war’s end.” At a press conference in Japan on July 8, Secretary Pompeo brushed off North Korea’s comments and said that Pyongyang had reaffirmed its commitment to denuclearization. “People are going to make stray comments after meetings. If I paid attention to the press, I’d go nuts,” he said. Meanwhile, United States President Donald Trump tweeted on July 9 that he has “confidence that Kim Jong Un will honor the contract we signed &, even more importantly, our handshake.” Trump also suggested that China “may be exerting negative pressure” on the denuclearization deal over the Sino-U.S. trade dispute.

Based on a close reading of North Korea’s statement and from the U.S. and South Korean response, we are optimistic that there was good progress at the latest round of U.S.-DPRK talks. The 65th anniversary of the Korean War armistice could see North Korea take concrete steps towards irreversible denuclearization and the signing of a peace treaty (in April, SinoInsider made the prediction that a peace treaty would be signed on July 27). We believe, however, that whether or not the world sees peace on the Korean Peninsula and progress on denuclearization later this month hinges on the level of trust that the U.S. and North Korea have in each other.

February 2018: North Korea participates in the Winter Olympics in South Korea at the last minute. Athletes from both Koreas march in the opening ceremony together bearing the flag of a unified Korea.

March 2018: Kim Jong Un requests to meet with Trump. Trump agrees, and a meeting is scheduled for June.

May 2018: North Korean state media and officials criticize the U.S. and show a lack of sincerity for the meeting with President Trump. Trump cancels the meeting, and Kim Yong Chol later travels to America to meet with Pompeo in New York and pass a letter from Kim Jong Un to Trump in Washington. Trump announces that the meeting is back on schedule.

June 12, 2018: Trump and Kim meet in Singapore and sign a joint declaration. Both parties agree to establish new relations and build a “lasting and robust peace regime on the Korean Peninsula.” Trump commits to providing security guarantees to North Korea, while Kim reaffirmed his “firm and unwavering commitment to complete denuclearization of the Korean Peninsula.”

Later, news outlets say that North Korea has been erasing its anti-U.S. propaganda and has stopped directly attacking Trump since March.

Our take:
1. We previously wrote that authoritarian regimes like the DPRK and the PRC cannot be seen to lose face because it affects their political legitimacy. So official remarks in both regimes, even on bilateral affairs, are often crafted with internal propaganda considerations foremost in mind. The use of critical language in North Korea’s statement on the recent bilateral talks with the U.S. appears to be an attempt to reconcile the overall tone of the statement—that of a weaker party humbly addressing a superior party—with Pyongyang’s carefully cultivated “tough guy” image. And given the Western media’s fixation on words like “gangster-like” and “regrettable,” North Korea has at least been successful in convincing foreigners that it was just as tough as before. However, the statement also contains rare efforts at self-deprecation, such as North Korea admitting that it is “so naive as to be foolish” in talks with the U.S. The statement also notes that North Korea “still cherishes our good faith in President Trump,” an unusual remark to make if Pyongyang was genuinely backsliding on denuclearization.

Indeed, the statement reflects North Korea’s fear that negotiations might breakdown due to a lack of trust on both sides. “Trust” is mentioned five times in the statement, while “mistrust” and “distrust” and mentioned once each. The statement also describes the talks as “apprehensive” and “regrettable,” and uses phrases like “defusing tension” (twice). Finally, the statement notes that America’s suspension of joint military exercises with South Korea is a “highly reversible step,” while its destruction of a nuclear test site is “irreversible.” Regardless of North Korea’s claim about the irreversibility of blowing up its nuclear test site, it is clear that Pyongyang remains very wary of whether it can trust the U.S. to live up to its side of the bargain post-denuclearization. After all, both countries are technically still at war with each other, and the DPRK only very recently started downplaying anti-American sentiments at home. For North Korea’s elites, fears of decapitation and regime overthrow by the militarily superior U.S. are very real.

The statement, however, shows greater sincerity from North Korea towards denuclearization as compared to past statements, even if it resorts to rhetorical language to advance a point. While the statement calls for a “step-by-step” and “simultaneous” approach to denuclearization—an approach that experts believe facilitates foot-dragging and the ultimate failure of North Korea to abandon its nuclear weapons—it also notes that “both sides should be bold enough to be free from old ways which had only recorded failures and resolve the problem in a fresh manner which is never bound by the existing ways.” The latter remark opens the door to creative solutions where Kim Jong Un can tell his people that the DPRK is dismantling its nukes per its own initiative (step-by-step) and not because of U.S. pressure (not too unlike Xi Jinping declaring that China would reform and open up at its own pace in the face of trade pressure from America). Selling denuclearization this way allows Kim to remain firmly in control of the domestic narrative and prevent the process from being undermined by party hardliners.

We wrote in March that Kim’s biggest headache in denuclearization is selling the move to the North Korean elites and the people. The statement by the North Korean foreign ministry after the latest round of U.S.-DPRK talks reflects precisely the sort of difficulties we anticipated that Kim would face.

2. The Trump administration has repeatedly said that it would maintain the “maximum pressure” campaign on North Korea until complete, verifiable, and irreversible denuclearization is achieved. Trump has also promised to provide security guarantees to North Korea. The administration would unlikely bulge from those positions.

An obvious problem with the security guarantee pledge is the Korean War. It would be impossible for U.S. to offer safeguards, no matter how creative or extensive, to a country that it is still at war with. And Kim Jong Un doesn’t appear to be comfortable with starting on irreversibly destroying his nuclear capacity before America can guarantee his safety. This particular conundrum and its probable workarounds, as well as the issue of mutual trust, could be what Kim Yong Chol was referring to when he asked Secretary Pompeo during a press conference if he had slept well after the “very serious discussions on very important matters” between the two parties on the first day of Pompeo’s visit.

Here is how we believe both countries might be able to resolve their respective problems and move forward with denuclearization:

3. While North Korea might not have ceased construction at its nuclear sites, it has not conducted missile or nuclear testing since December 2017. The lack of testing is perhaps the more critical point at this stage than whether or not there is construction since the U.S. and the DPRK have not officially embarked on the denuclearization process.

4. It is very likely that the Chinese regime has a hand in dragging out North Korea’s denuclearization. We wrote earlier that Beijing would see bringing Kim Jong Un to the negotiating table as a bargaining chip to delay a trade war with America.

However, after Trump announced tariffs in June, we wrote that “the CCP could opt not to cooperate with the U.S. in enforcing sanctions and instead find ways to aid Pyongyang, or drive a wedge between the U.S. and North Korea” in retaliation. “The denuclearization of North Korea may not occur as easily as the Trump administration might expect post-tariffs,” we wrote.

5. To get the Chinese regime to back off on North Korean affairs, America can consider applying carefully modulated pressure on Beijing. For instance, the U.S. could hit China with more tariffs, punish vital state-backed companies like ZTE and Huawei, and step up military presence in the South China Sea and Taiwan Straits. Creative “soft” power strategies can also be used to complement the “sharp” power projection. The timing and tempo of the strategies, however, is vital to ensure mission success.

Read more:
Yes, North Korea Will Give up Its Nukes and Kim Jong Un Is Crying to Prove It
Trump-Kim Summit Affirms Our Peace and Denuclearization Prediction
Why We Predicted Coming Peace on the Korean Peninsula