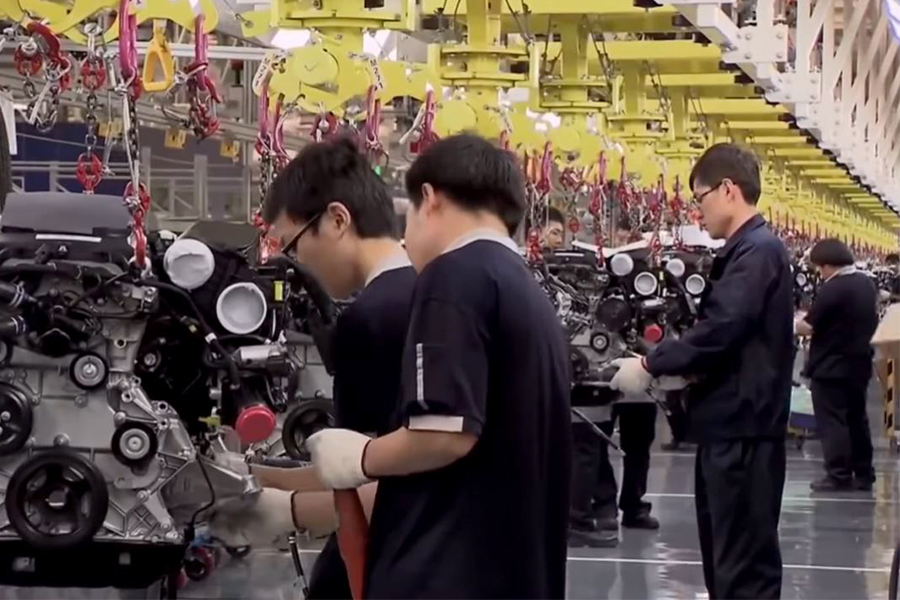 ◎ There are two reasons why the Xi administration appears to be motivated to open up China’s economy.

China’s National Development and Reform Commission and the Ministry of Commerce jointly released a shortened negative list of industries where foreign industries are restricted or banned on June 28.

The new list reduces the number of sectors restricted to foreigners from 63 to 48, and will go into effect on July 28. The sectors where curbs have been eased include finance and banking, automobile, agriculture, manufacturing, energy, professional services, and infrastructure. China also will relax or remove ownership caps on businesses like power grids and ship and aircraft manufacturing.

The backdrop:
The new negative list comes as China’s investment restrictions on overseas companies have drawn renewed criticism from the United States and the European Union.

The announcement of the list also comes as the trade dispute between China and the U.S. is heating up. During three rounds of Sino-U.S. trade talks, the Trump administration pushed the Chinese regime to make structural changes to its economy to cut the U.S. trade deficit with China. The Chinese side offered to purchase more U.S. goods ($70 billion) to ease the deficit and cancel planned tariffs, but the Trump administration rejected the offer and moved to impose tariffs. The first rounds of U.S. tariffs of $34 billion would come into effect on July 6, and China faces a potential $450 billion worth of duties should it continue to pursue trade retaliation.

The negative list is the latest in a string of economic liberalization measures rolled out by the Xi Jinping administration. Previous measures include cutting auto tariffs and issuing plans with deadlines for the opening up of Hainan Province.

Our take:
There are two reasons why the Xi administration appears to be motivated to open up China’s economy: regime and personal survival, and U.S. pressure.

1. The Chinese economy cooled off in the later years of the Hu Jintao administration and was plagued with intractable financial risks, a result of Jiang Zemin era (1989-2012) policies and culture of corruption. Xi had sought to reform the economy about a year into his first term at the Third Plenum of the 18th Central Committee (November 2013), very likely as a means to defuse risks and preserve the Chinese economy. The Chinese Communist Party (CCP), after all, had tied its political legitimacy to economic prosperity after Deng Xiaoping took power. However, many of the Third Plenum reforms went unimplemented.

Many observers point to Xi’s failure to carry out economic reform in his first term as another example of CCP duplicitous behavior. The reality is more complex. Xi might have the intention to reform, but he could not start the process without first consolidating power. Meanwhile, his political rivals (Jiang faction and other CCP interest groups) were entrenched in both the public and private sectors. Indeed, Jiang faction associates have been linked with worsening China’s 2015 financial crisis. Chinese scholars and anti-corruption officials also noted that officials in local governments and elsewhere were carrying out “passive resistance” (bu zuo wei) to Beijing by not properly executing orders. Xi’s anti-corruption campaign and efforts to consolidate power are aimed at gaining the upperhand in the CCP factional struggle and curbing official resistance to ensure that his orders are duly executed. Since the 19th Party Congress (top allies installed in key offices) and the Two Sessions (presidential term limits removed; Wang Qishan named vice president), Beijing has stepped up a financial de-risking campaign and rolled out economic reforms one after the other.

Xi, however, would not find any joy in opening up the economy despite his increased personal power because he is working within the CCP political system. The system is deeply resistant to market reform, and CCP political culture does not tolerate showing any signs of weakness under all circumstances. Thus, the Chinese regime keeps insisting that it is opening up at its own pace and as part of its “national strategy,” and is not caving to U.S. pressure. Not showing weakness also explains why Beijing had no choice but to announce $50 billion in retaliatory tariffs to match the recently imposed U.S. tariffs even though China cannot withstand a trade war with America. Indeed, the CCP’s desire for self-preservation and saving face has trapped Xi Jinping in a Catch-22 situation as Sino-U.S. trade tensions escalate.

If Xi’s deleveraging campaign cannot defuse financial woes and trade tensions with the U.S. worsen, his political enemies, while weakened, can seize the opening to undermine his rule and further complicate the situation. We explained the dangers Xi faces to his person in our earlier article on why he removed the presidential term limits. In other words, Xi may finally have enough power to push through reform, but his power is brittle, and the political risks his administration faces rises sharply with each failure.

2. The Chinese regime would never admit it, but trade pressure from the Trump administration is a crucial factor pushing Beijing to hasten economic liberalization.

The Trump administration is clear that it wants China to carry out structural reforms to allow for greater trade reciprocity between the two countries. President Donald Trump’s decision to reject a $70 billion purchase deal with China and press ahead with tariffs underscores his determination. While Beijing has been rolling out reforms, Trump administration officials have indicated that the U.S. is suspicious about China’s sincerity to reform.

Speaking at the Detroit Economic Club on June 18, Secretary of State Mike Pompeo said: “Chinese leaders over these past few weeks have been claiming openness and globalization, but it’s a joke. Let’s be clear. It’s the most predatory economic government that operates against the rest of the world today. This is a problem that’s long overdue in being tackled.”

At a financial forum in Beijing on June 29, U.S. ambassador to China Terry Branstad said. “The administration is not convinced that the Chinese are willing to make enough progress soon enough. I think the concern is it’s been promised so many times, and it’s been delayed. So, we really want to see it happen and we want to see it happen now. Not three years from now or five years from now.” Branstad is likely referring to Beijing’s plans to take three to five years to fully lift foreign ownership caps for financial services and other industries.

The U.S. tariffs are the most visible sign that the Trump administration lacks trust in the Xi administration. To win trust, Xi would have to demonstrate stronger commitments to opening up China.

3. Faced with external and domestic pressures, Xi Jinping’s current best option is to liberalize China’s economy as quickly as possible. We have been writing that Xi would open up the economy before the U.S. tariffs were announced (see here and here), and that the Chinese regime would sell the reforms as self-initiated measures.

The Trump administration can “help” Xi to overcome resistance from the CCP system and actualize his economic reforms through firmly and continually pressuring China on trade and other issues like human rights. Excessive “sharp” pressure, however, could produce unintended and dire consequences.

Get smart:
Businesses in China or would-be investors must account for political risk in the climate of a Sino-U.S. trade dispute.

Read more:
The Potentially Dire Implications of US Tariffs on China