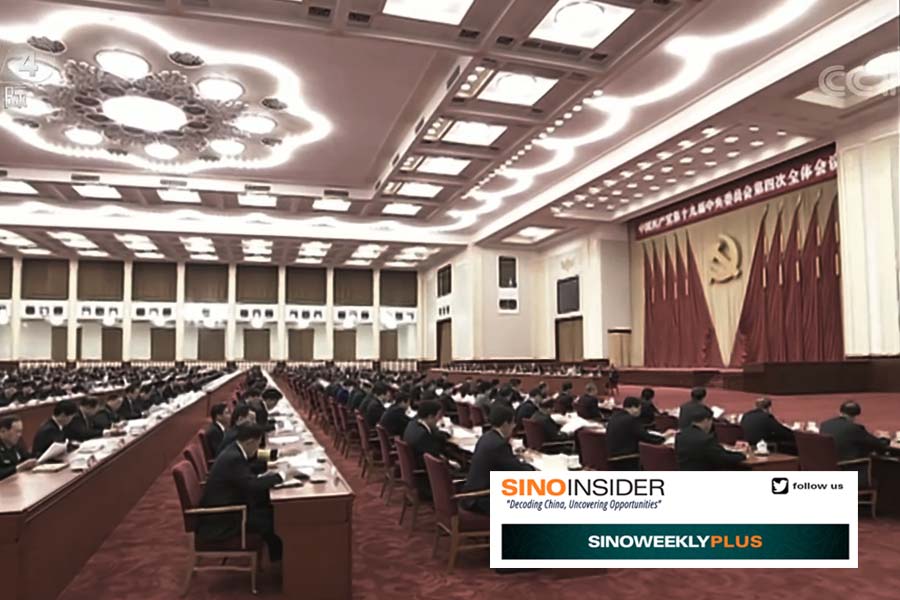 ◎ The following analysis was first published in the Oct. 1 edition of our subscriber-only SinoWeekly Plus newsletter. Subscribe to SinoInsider to view past analyses in our newsletter archive.

On Sept. 28, the CCP Politburo held a meeting to discuss the 14th Five Year Plan, future targets for 2035, and a set of regulations for the work of the CCP Central Committee (中国共产党中央委员会工作条例, henceforth referred to as “Regulations”).

According to state mouthpiece Xinhua, the Regulations are an “inevitable requirement” for “firmly safeguarding the ‘quan wei’ (權威) of the Party Central Committee with Comrade Xi Jinping at the core.” The Regulations will also make “comprehensive provisions” on the “leadership position, system, powers, methods, decision-making, and self-building” of Party Central so as to guide the strengthening of Central Committee work.

Our take
1. The Regulations, which could be unveiled at the Fifth Plenum, appear to be an attempt by Xi Jinping to formalize his various power consolidation moves since 2016 and the transition from “consensus” rule (“collective leadership”) to “strongman” authoritarianism (“General Secretary Plus”):

The formalization of monumental political changes in the CCP such as those advanced by Xi usually starts with propaganda, is later actualized in protocol, and finally gets inscribed in official documentation. The idea behind formalization is to make it clear in the CCP regime that “Xi represents Party Central, and Party Central is Xi.” In other words, the following proposition is about to be valid (albeit indirectly so): “The Party leads everything, and Party Central leads the Party; therefore Xi, who represents Party Central, leads everything.”

What is eventually written into or excluded from the Regulations could shed light on how far along Xi is in transitioning the CCP from “consensus” to “strongman” rule. If the Regulations merely emphasize Xi’s paramount status in the “collective leadership,” then he is comfortable at the moment with formalizing the “General Secretary Plus” arrangement. However, if the term “collective leadership” is not included in the Regulations, then Xi is working to formally abolish “consensus” rule and promote a “strongman” system.

2. Several implications can be drawn from Xi’s decision to announce the Regulations at this time.

a) Xi has the advantage in the CCP factional struggle

Xi Jinping has clearly taken steps after the Beidaihe meeting to further consolidate power and boost his “quan wei.” The fact that Xi is able to announce the Fifth Plenum dates and a bid to formalize his power consolidation via the Regulations suggests that Xi has the edge in the factional struggle while his opponents are “suppressed,” at least for the moment.

CCP factional politics is a cutthroat affair, and the tables can turn quickly regardless of how much power a faction might hold. Thus, despite being the most powerful man in the regime on paper, Xi still needs to increase his “quan wei,” the intangible but crucial signifier of “power-prestige” in the Party. Again, the ousting of Party Chairman Hua Guofeng by Deng Xiaoping, who never held the top job but accrued immense “power-prestige” through accomplishments, is illustrative of the relationship between titles and “quan wei” in determining who actually has power and authority.

There are at least three ways in which elite CCP cadres gain “quan wei.” While the CCP officially believes in atheist communism and seeks to abolish class, the “red aristocracy” like Party princelings Xi Jinping or Bo Xilai naturally have more “quan wei” over “peasant” officials (官二代) like Hu Jintao or Li Keqiang due to “heredity”; princelings maintain that their “right to rule” stems from the fact that their revolutionary fathers established the “Red” dynasty (打下江山). Meanwhile, official positions, titles, political theories/slogans/phrases/movements, propaganda, protocol, as well as elite and military support also add to a CCP cadre’s “quan wei.” Finally, “quan wei” can be accumulated through racking up personal accomplishments. This last point explains why Xi took personal responsibility for the Xinjiang issue and his leadership’s inept handling of the coronavirus outbreak while reframing them as “accomplishments.”

Xi is almost certainly aware that the more power he holds, the more precarious his personal situation becomes. Thus, Xi will endeavor to show no weaknesses (even when his policies have clearly gone astray), keep finding ways to enhance his “power-prestige” in the regime, and subdue factional rivals to minimize his political risks.

Before taking office, Xi Jinping forged crucial alliances with the Hu Jintao camp and powerful princeling clans (like the Ye family) to take on the Jiang faction. Xi, however, will likely feel less need for existing alliances the closer he brings the regime to full “strongman” rule. When Xi becomes a genuine strongman, the balance of power in the CCP factional struggle would be drastically altered, and along with it the interests and priorities of all factional struggle participants. For instance, paranoia will inevitably set in for Xi, and he will view everyone, even current close allies, with suspicion. In fact, Xi could already be re-evaluating existing political alliances, and those with whom he is merely in a “marriage of convenience” (like Li Keqiang) will be the first to see their political risks rise.

Meanwhile, the “anti-Xi coalition” has yet more reason to oust or sideline him so as to restore the balance of power and preserve their interests. In light of recent events covered in our previous analyses, we believe they will not hesitate to use “unrestricted warfare” tactics that could imperil both Xi and the regime.

On the whole, “strongman” rule will lock the CCP into an endless and deadly power struggle—the more powerful the “strongman,” the greater the resistance to his rule, and the graver the consequences for the CCP regime.

Xi could be calculating that formally equating himself with the Party would lower his political risks because factional rivals will think twice about undermining him lest they bring down the Party as well. The gross imbalance of power in the Party resulting from Xi’s actions, however, could instead compel the “anti-Xi coalition” to move against him to preserve their interests and ensure their survival. We previously noted that Xi’s rivals are capable of pinning all the CCP’s ills on him before ousting him in the name of “restoring order from chaos” (“撥亂反正”), even if it means dissolving the Party.

In the era of “perish together” factional struggle and a perilous geopolitical climate for the CCP regime, Xi’s factional rivals will have no qualms with using “unrestricted warfare” tactics against him, regime survival be damned. Businesses, investors, and governments must beware sharply rising political risks and volatility in China.

The Party’s tightening of control over China under Xi Jinping means that his factional rivals could find it tough to pull off successful “unrestricted warfare” schemes domestically. Hence, the “anti-Xi coalition” could seek “help” from abroad to secure Xi’s ouster. For instance, Xi’s rivals could hand over incriminating, verifiable intelligence to the U.S. that demands some sort of response, including “sensitive” topics like the origins of the coronavirus and the Xinjiang persecution campaign, or matters concerning U.S. national security. This scenario will likely produce a “Berlin Wall” moment for the CCP unless both Xi and the U.S. decide not to act on the intelligence leak.

Meanwhile, in a scenario where Xi’s rivals find success against him with their “unrestricted warfare” and Xi has no good options left, there is a possibility that he could turn to President Trump for assistance. This too would result in a “Berlin Wall” moment for the CCP. 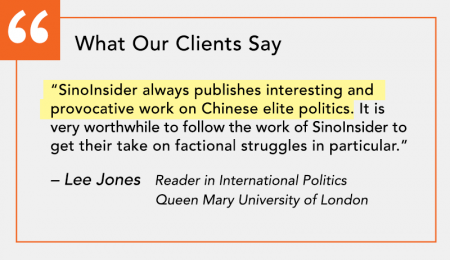