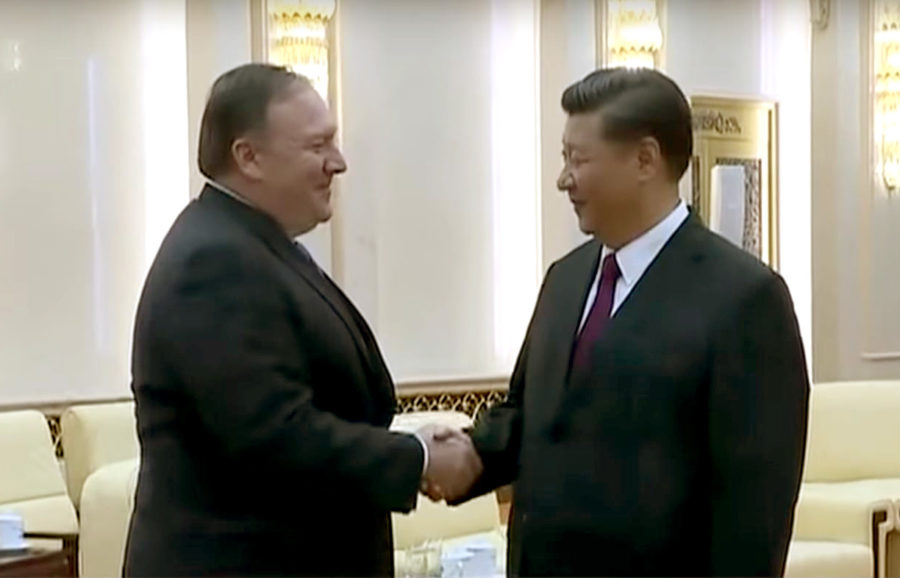 ◎ Trump could still press ahead with tariffs or reduced tariffs on June 15 if there is a lack of mutual trust between the two sides.

On June 14, Secretary of State Mike Pompeo met with Chinese leader Xi Jinping in Beijing as part of an effort to secure international support for the United States on the denuclearization of North Korea. A day earlier, Pompeo had met with the foreign ministers of South Korea and Japan in Seoul to update them on the U.S.-DPRK summit in Singapore on June 12.

Speaking at a press conference with Chinese foreign minister Wang Yi, Pompeo thanked China and Xi for “his role in helping bring North Korea to the negotiating table and for the continued support as we work to achieve the complete, verifiable, and irreversible denuclearization of North Korea.” He added that China, Japan, and South Korea are committed to a “fundamentally changed relationship” after the Singapore summit, and that “we have turned a corner, that we have begun a process away from the threat of war and towards peace on the peninsula.” Pompeo said that the three countries would keep the sanctions regime against North Korea in place until its denuclearization is complete.

Pompeo said that the U.S. has a “very constructive relationship” with China. “We’ve seen the power that comes when the United States and China do work together, when we don’t treat the relationship as being zero-sum,” he said. He added that there was “good and constructive discussions” on trade, and that America’s trade deficit with China is “still too high.” Pompeo also said: “When our two countries disagree, our two countries will speak up and firmly stand for each of our people.”

According to state mouthpiece Xinhua, Xi Jinping said that “Sino-U.S. cooperation can accomplish major matters that benefit both countries and the world.” He expressed hope that both countries abide by the consensus reached between him and Trump in Beijing, as well as “strengthen communications, increase mutual trust, control disagreements and expand cooperation.” Xi added that the U.S. and China should “always read each other’s strategic intentions correctly, and respect and show consideration to each other’s core interests and major concerns.”

The Xinhua report of Xi and Pompeo’s meeting was placed in a prominent position on the Xinhua Chinese language home page. Underneath the report was a commentary piece by “Xin Shiping” (a homophone of Xi Jinping that is meant to represent Xi’s views) on how China’s opening up measures “throws open the golden gates to the world.” The commentary quotes a speech by Xi about how China would open its economy “wider and wider,” and how the pace of opening up would go fast.

The backdrop:
The meeting between Pompeo and Xi follows the signing of a joint statement between Trump and North Korean leader Kim Jong Un where both sides commit to working “toward complete denuclearization of the Korean Peninsula.”

The meeting also comes before Trump is due to activate $50 billion of tariffs on Chinese imports on June 15. Reports in the Western media indicate that Trump would go ahead with the tariffs based on his remarks to Fox News that he was “very strongly clamping down on trade” with China. Trump, however, did not mention the tariffs specifically in speaking with Fox News. Other reports say that Trump would roll out tariffs on a smaller list of Chinese exports.

Our take:
1. President Trump previously linked China’s help in bringing North Korea to the table for denuclearization with the trade issue between both countries. We analyzed earlier that the Singapore summit was a success for Trump, and the remarks of Secretary Pompeo in China and the Xinhua report affirm our assessment. The official remarks on both sides also reveal the importance of Xi Jinping and China in reining in North Korea, and the Xinhua report at least appears to put out a strong reminder to Trump that Xi and China have greatly contributed to his success with Kim.

2. While the Xinhua report of Xi’s meeting with Pompeo makes no specific mention of trade issues with the U.S., it is very obvious that Xi Jinping is most concerned with trade and the tariffs that Trump plans to impose. First, the report refrains from criticizing the U.S. and plays up the goodwill and potential of beneficial cooperation between both sides. Next, the “Xin Shiping” commentary on China opening up more and faster appears to be deliberately positioned below the Xi-Pompeo meeting report to signal that Xi is prioritizing economic liberalization, or the implementing of “structural changes” that U.S. trade officials have been asking as a means to lower the U.S. trade deficit with China. Finally, China has been announcing various opening up measures on an almost daily basis since the third round of Sino-U.S. trade talks in Beijing and the lead up to the Singapore summit.

3. The constant emphasis on cooperation and trust in the Xinhua report reflects Xi Jinping’s concerns that the Trump administration may misread his intentions and become unduly suspicious of whether he is living up to his end of the consensus reached with Trump. For instance, Trump had openly wondered whether Xi’s second meeting with Kim in Dalian had led to North Korea’s abrupt “about-face” on having the Singapore summit. The phrase “control disagreements” appears to be a call for both sides to temper hawkish voices who are advocating policies or making public comments that would upend agreements and progress on trade issues or North Korea.

4. The Chinese economy has been worsening to a point where civil servants are openly protesting for their unpaid wages and truck drivers are going on strike across China. The United States Federal Reserve raising interest rates is also set to have a negative impact on the Chinese economy. We wrote earlier that China cannot withstand a trade war with the U.S. So Xi is likely under immense pressure to delay a trade conflict with the U.S. for as long as possible to buy time to fix the economy and fend off political rivals who are looking to seize an opening to undermine his rule. The Xinhua report of the Xi-Pompeo meeting and China’s recent wave of opening up measures appear to be Xi’s attempt to gain a reprieve from Trump.

What’s next:
1. President Trump and his team are likely very aware of Xi Jinping and China’s importance in keeping the pressure on North Korea until its denuclearization is complete. To reward Xi’s effort and ensure his future cooperation, Trump could delay the implementation of tariffs and pause the “trade war.” After all, Trump has already granted ZTE a reprieve of sorts after hitting it with a crippling seven-year business ban in April. Xi, however, would have to show concrete efforts to open up China’s economy to maintain the tariff suspension.

2. Trump could still press ahead with tariffs or reduced tariffs on June 15 if there is a lack of mutual trust between the two sides (hawkish voices in the administration winning out, for example), or if Trump believes that Xi is not doing enough to liberalize China’s economy. However, we are optimistic that Trump won’t immediately impose tariffs.