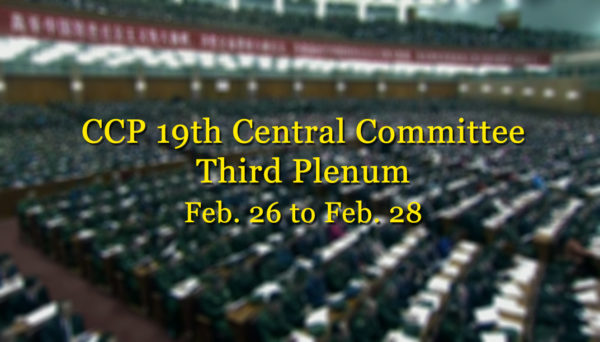 ◎ We believe that Xi held two separate plenums to discuss the adding of his “Xi Jinping Thought” to the constitution and the appointing of key state personnel because he met with stiff resistance from inside the Party.

On Feb. 24, the Politburo Standing Committee announced that the 19th Chinese Communist Party Central Committee would be convening its Third Plenum from Feb. 26 to Feb. 28.

The discussions at the Third Plenum will be focused on “deepening reform of Party and state organs.” Lists of candidates for top state positions and the top political advisory body will also be deliberated.

The Second Plenum, which is traditionally held near the end of February, was instead convened on Jan. 18 to Jan. 19. Instead of deliberating personnel appointments, this Second Plenum was chiefly about adding Xi Jinping’s political theory, a title of symbolic significance in the CCP, to the state constitution. Also approved at the Second Plenum is legislation for the new national supervision apparatus, a major political reform initiative.

1. We believe that Xi held two separate plenums to discuss the adding of his “Xi Jinping Thought” to the constitution and the appointing of key state personnel because he met with stiff resistance from inside the Party. In other words, Xi felt a need to consolidate his position by adding his name to the state constitution first (Second Plenum) before carrying out further negotiations on personnel appointment (Third Plenum), including confirming Wang Qishan as the next Chinese vice president.

2. The candidates for the top state leadership positions and the political advisory body should be finalized at the Third Plenum. (See our Two Sessions personnel forecast list.)

The biggest difference between this Third Plenum and previous editions is the discussion of Party and state organ reform, or political system reform. The most prominent reform up for consideration should be the establishment of the National Supervision Commission, a state anti-corruption body responsible for carrying out investigation and prosecution of corrupt Party cadres and civil servants. We believe that the Ministry of Supervision and the National Bureau of Corruption Prevention may be merged into the National Supervision Commission as part of the reform.

Based on our analysis of CCP factional fighting and personnel movement, we also believe that the current financial regulatory structure may change from a “central bank and three commissions” model to a “central bank plus one commission” model. (See “Leaner and Meaner: Why China’s Financial Oversight Agencies May be Merging”)

3. Xi Jinping spent his first term in office consolidating power in the Party apparatus through his anti-corruption campaign, political reforms (creating leading small groups and tightening Party discipline regulations to rein in cadres) and military modernization efforts. After more fully consolidating power over the Party at the 19th Congress, Xi appears to be reforming state institutions to consolidate his “state power.”

We earlier analyzed that Xi faces a life-and-death factional struggle that has already seen at least two failed coups and several attempts on his life. Understandably, Xi has dire need to implement political and economic reform to preserve his position.

4. The economic and political reforms proposed at the Third Plenum may just be the beginning of a political system overhaul. If Wang Qishan does become vice president and concurrently holds the position of deputy leader of the CCP National Security Commission, expect major reforms to be unveiled at the Fourth Plenum in the latter half of this year.