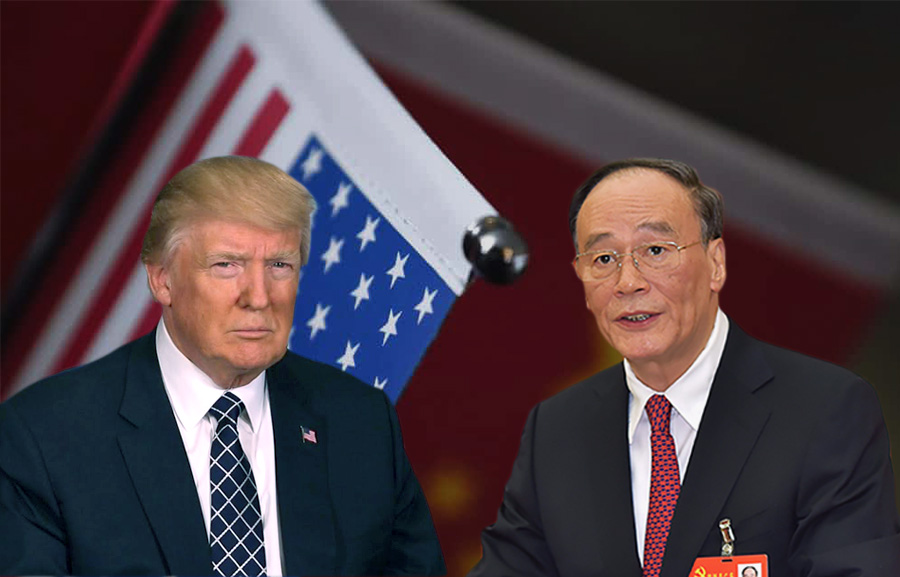 ◎ Xi Jinping could bring back trusted ally and seasoned troubleshooter Wang Qishan ahead of schedule to help even the odds.

In December 2017, President Donald Trump identified China as a “revisionist power” and strategic “competitor” in his National Security Strategy (NSS). The new U.S. National Defense Strategy (NDS) unveiled the following month echoes the NSS’s theme of long-term “great power competition” with China and Russia. And on several occasions in January, Trump administration strongly signaled that it is preparing to ratchet up trade action against China in 2018.

Faced with increasing American pressure and domestic woes, China’s Xi Jinping could bring back trusted ally and seasoned troubleshooter Wang Qishan ahead of schedule to help even the odds.

The U.S.-China relationship always appeared to be taking a competitive turn when Trump was elected president. Trump was a vocal critic of China’s trade practices with the U.S. before he was a presidential candidate and on the election trail. In April 2017, Trump ordered a probe on China’s steel imports and launched an investigation into China’s intellectual property theft in August. In mid-January 2018, Trump told Reuters that his administration would soon be announcing a “very big intellectual property potential fine,” and that he would touch on trade action against China in his State of the Union address at the end of the month. Meanwhile, a senior White House official told several news outlets that Trump’s advisors are “united” on taking action against China this year. “Across the board, everyone sees China as a major threat that needs to be dealt with,” the official said.

The Trump administration looks set to pressure China not just in 2018, but over the long haul. Both the Trump NSS and NDS note China’s military modernization efforts, “predatory economics,” influence operations and attempt to assert its hegemony in the Indo-Pacific region, and state America’s commitment to “long-term strategic competition” with China. While the conventional view holds that Trump’s praise of Xi Jinping contradicts his tough stance on China, we believe that Trump treating Xi and China differently is in fact a strategic move.

The rising U.S. pressure comes when Xi is beset with domestic problems. Xi may have more solidly consolidated control over the Chinese Communist Party (CCP) at the 19th Congress in October, but he is far from the all-powerful and unrivaled leader as the mainstream narrative depicts. The recent suicide and prosecution of two high-ranking Chinese generals who were arrested barely three months before the 19th Congress hints at a failed coup against the Xi administration. The frequent reshuffling of senior military and political officials after major personnel movement at the 19th Congress is revealing of political instability in the Chinese regime. Recent calls by the Xi leadership to eliminate “major risks” in the financial sector, the legislating of stricter regulation, and official confessions of fake economic data by provincial governments indicate that China is facing more severe economic woes than publicly reported. And the outrage by middle-class Chinese over the eviction of Beijing’s “low-class population,” or migrant workers, point towards increasing social tensions and growing intolerance towards governmental repression. Xi’s troubles are compounded by a U.S. government that declared its support of China’s entry into the World Trade Organization a mistake and is comfortable in calling out China’s “market-distorting behavior.”

With confrontation with America inevitable, Xi will need a competent, dependable representative to handle Sino-U.S. relations. Xi’s representative would be someone that he trusts enough to reflect his intentions unvarnished to the Trump administration. The representative would ideally be already familiar to American officials and needs to have a good grasp of economics. Finally, the representative would likely be the incoming Chinese vice president, a state position with sufficient diplomatic rank to directly negotiate with members of Trump’s Cabinet.

Based on the criteria above, Wang Qishan stands a good chance of being selected by Xi to serve as his China-U.S. representative.

Wang Qishan is arguably Xi Jinping’s most trusted official. Wang and Xi knew each other as sent-down youths in Yan’an City during the Cultural Revolution period (1966-1976). In Yan’an, they swapped books on economics and social sciences, and once shared a single bed and blanket due to the impoverished living conditions at the time. After Xi became Party General Secretary in 2012, he appointed Wang as chief of the Central Commission for Discipline Inspection and put him in charge of the anti-corruption campaign. Wang would go on to purge over 1 million officials for malfeasance. Many of disgraced officials at the deputy ministerial-level and above are members of the Jiang Zemin faction, including prominent individuals like Zhou Yongkang, Xu Caihou, and Guo Boxiong. Indeed, the anti-corruption campaign was so intense that Chinese officials reportedly declared that they would sooner face the devil than Wang Qishan. It is not an understatement to say that Xi’s swift power consolidation is directly linked to Wang’s efforts at cleaning house. And Wang’s achievements are by no means easy to attain given the Jiang faction’s nearly two decades of dominance over the regime.

Indeed, Wang has a track record of tackling crises. As vice governor of Guangdong Province in the late 1990s, Wang oversaw the $4 billion bankruptcy of a state-owned investment company. In 2003, he was appointed Beijing mayor and tasked with handling the SARS epidemic. Later, Wang oversaw preparations for the Beijing Summer Olympics in 2008. When the 2008 financial crisis struck, he was made a State Council vice premier and put in charge of commerce and finance. Wang’s reputation as a problem solver earned him the moniker of “firefighter-in-chief.”

Wang the “firefighter-in-chief” has the required experience and knowledge to handle U.S.-China relations. On the economic front, Wang’s CV is solid: He was one of four influential economic advisors in the 1980s who promoted reform-minded policies; he helped launch China’s leading investment bank and managed the bankruptcy of a state-owned investment firm in the 1990s; and he oversaw trade and economic relations with the U.S. as vice premier. American officials are familiar with Wang from his time as vice premier, and Wang is also long acquainted with former U.S. Treasury Secretary Henry Paulson. Paulson is currently the chairman of Paulson Institute, an independent think-tank which is focused on bettering U.S.-China relations and promoting economic growth and environmental protection in both countries.

Going by insider information made public in the press, Xi Jinping may have already made up his mind on picking Wang Qishan for vice president. Western media started reporting in November that Wang will become China’s next vice president and tasked with handling Sino-U.S. relations. In December, Hong Kong newspaper South China Morning Post cited several sources as saying that Wang was still attending Politburo Standing Committee meetings as a non-voting member and is expected to be named vice president at the upcoming Two Sessions.

But Xi may not necessarily get his man. Many scholars and observers have explained Wang’s exit from the Politburo Standing Committee at the 19th Congress as Xi adhering to Party age norms. We believe, however, that Xi was forced to compromise on retaining Wang Qishan in the Standing Committee due to fierce internal resistance. The intense overseas campaign against Wang leading up to the 19th Congress is a surface manifestation of opposition sentiment, and Xi’s instruction to “protect embattled high-ranking officials” during an emergency July meeting is an oblique show of support to Wang. The results of the 19th Congress indicate that Xi likely gave up Wang in exchange for adding the symbolically significant “Xi Jinping Thought” into the Party charter and further consolidating power. However, we assessed in October that Xi could still pick Wang for a state job—head of the new state anti-corruption body or vice president with a diplomatic portfolio—given his considerable importance to the Xi leadership as a seasoned troubleshooter. The subsequent media articles about Wang being selected for the vice presidency corroborates our analysis.

At present, Wang has virtually no competition for the vice presidency. Incumbent vice president Li Yuanchao is almost certainly stepping down in March, and he may even be headed for an earlier exit if the intelligence we received in December about his being unofficially probed proves accurate. Meanwhile, Wang Huning and Hu Chunhua, the two active officials whom observers consider to be potential vice presidential candidates, are ill-suited for the job. New Politburo Standing Committee member Wang Huning frequently joined Xi on diplomatic trips, but is known for being a quiet intellectual who rarely engages in conversation with U.S. officials at international forums. Hu Chunhua, the former Guangdong Party secretary, is automatically ruled out for the vice presidency because foreign observers frequently tout him as a possible successor to Xi. It is highly unlikely that Xi, who has very clearly not identified a successor at the 19th Congress, will now send mixed messages and pick someone who might seem like a potential successor as vice president, a position which Party leaders like Xi and Hu assumed before coming to the top office. On the other hand, no one would consider Wang a potential Xi successor should he become vice president as he is well past the unofficial retirement age for senior Party positions (Wang turns 70 in July). There is no upper age limit for the vice presidency.

As America edges closer to a trade conflict with China, Xi would need a dependable representative to smooth potential U.S.-China tensions. Wang Qishan appears to be the most likely candidate for the job, but Xi still needs to overcome internal Party resistance before he can appoint Wang as vice president. And if Xi clears the internal hurdle, he will have to weigh the risks and advantages of bringing back Wang as scheduled in March, or at an even earlier date.

If Wang isn’t appointed vice president, the extent of Xi Jinping’s power consolidation and the strength of his political opposition must be reevaluated.

On Jan. 29, Wang Qishan became a delegate to the Hunan legislature for the upcoming National People’s Congress session in March. This suggests that Wang may play a bigger role in elite Chinese politics, and further verifies our earlier analysis.