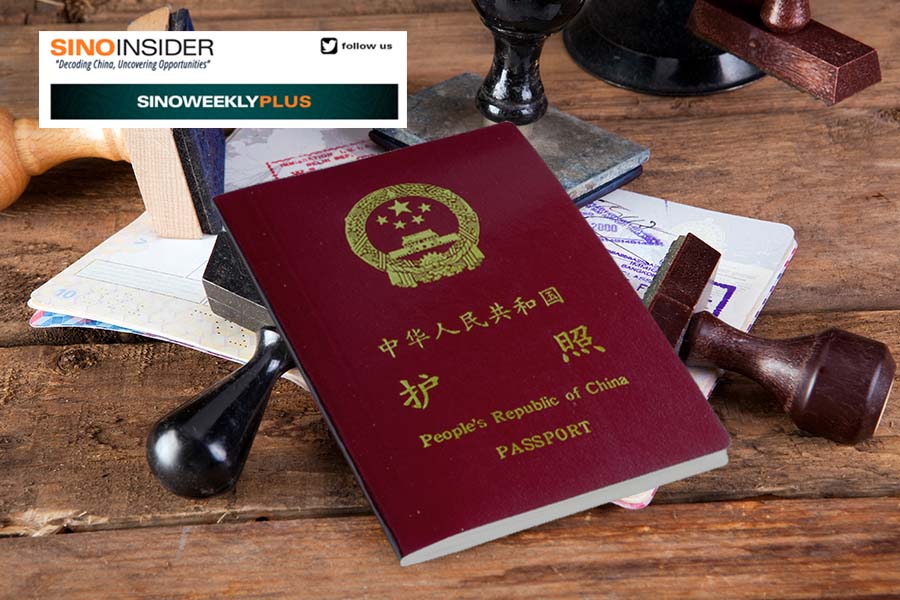 ◎ The following analysis was first published in the July 16 edition of our subscriber-only SinoWeekly Plus newsletter. Subscribe to SinoInsider to view past analyses in our newsletter archive.

On July 15, The New York Times reported that the Trump administration is considering a sweeping travel ban to the United States for Chinese Communist Party members and their families. The Times reported the U.S. government could also “revoke the visas of party members and their families who are already in the country, leading to their expulsion,” as well as impose travel restrictions on “members of the People’s Liberation Army and executives at state-owned enterprises.”

According to the Times’s report, White House, U.S. State Department and U.S. Department of Homeland Security officials are also considering alternative measures to blanket ban CCP members, including targeting only the 25-member Politburo and their families.

The Wall Street Journal also reported similar news on July 16. Michael Pillsbury, Trump’s informal China advisor, told the Journal that the travel ban would be “an important step in the direction that Secretary of State Mike Pompeo has been going in the last few months, to delegitimize the Communist Party and its 90 million members.”

News of a draft travel ban appeared to have an immediate impact in China. On July 16, Chinese stock markets fell the most in five months, with the Shanghai Composite Index dropping 4.5 percent and ChiNext in Shenzhen retreating 5.9 percent.

Our take:
1. News of Trump’s proposed travel ban comes as a double whammy for CCP members in government. This year, the CCP rolled out at least four regulations that strengthen the Party’s control and scrutiny over military officials (active and retired) and civil servants. In particular, a law on administrative punishments for civil servants published on June 20 states that CCP members can be demoted or fired for traveling abroad without permission. The law also states that CCP members who “illegally” obtained permanent residency overseas could be sacked from their job and expelled from the Party. Now CCP members have to contend not only with PRC government travel restrictions, but also the possibility of being barred entry from the United States.

Since taking office in 2012, Xi Jinping has tightened immigration control for CCP officials, including having their passports confiscated and/or not issuing new passports to them. At the Party elite level, Xi’s travel restrictions are oftentimes a direct response to the intra-Party factional struggle and represent an effort to put his rivals under control and on notice. Xi’s Party-wide travel restrictions, however, appear to be aimed at addressing the problematic issue of CCP members voting with their feet as they lose confidence in the Party. All in all, Xi’s travel restrictions allude to a serious crisis in the regime.

2. If imposed, a Trump travel ban on CCP members will compound Xi Jinping’s domestic political problems. Many among the CCP elite have family abroad, and some would have acquired American visas or even permanent residency. Also, the U.S. is a popular travel and immigration destination for rank and file CCP members with the means. A sweeping travel ban on CCP members to the U.S. would immediately make Xi deeply unpopular among regular Party members who are already finding it hard to leave China. Regular CCP members could even reconsider their Party affiliation and quietly partake in grassroots efforts to symbolically quit the Party as they plot their escape from the regime (for implications of this, see point 3). The Party elite would also have more reason to criticize Xi for worsening the Sino-U.S. relationship, and could inspire some to side with the “anti-Xi coalition” and escalate the “perish together” direction of the factional struggle against the Xi leadership. Members of the Party elite could even attempt high-profile “defections” to the United States that would embarrass the Xi leadership and further complicate the factional struggle.

Xi Jinping has been relying on Party orthodoxy to consolidate power over his factional rivals and secure his political and personal survival. To that end, Xi has kept strengthening the Party and its paramount position in the PRC since coming into office. Xi’s reliance on the Party to maintain power, however, is a double-edged sword as his factional rivals have used Party orthodoxy against him on several occasions over the past eight years. A potential Trump travel ban and its ramifications would make it increasingly harder for Xi to justify his power consolidation strategy. Depending on how things develop, Xi could find himself in a position where he has to choose between preserving the Party or ending the Party to save himself.

3. Much fury has been directed at the Trump administration over the reported travel ban. Critics of the travel ban for CCP members argue that the vast majority of them are not involved in policy. The presumption behind the argument is that many Chinese people—including human rights lawyers, scholars, business people, and regular folk—will be unfairly penalized for their Party membership. Some critics have also argued that a Trump travel ban would turn Chinese public opinion against the United States. And in the context of inflamed rhetoric over race issues in the U.S., some critics could claim that the reported Trump travel ban is “racist.”

We believe that critics of the travel ban should focus their ire on the CCP instead of the Trump administration. The fact that the administration is even contemplating a travel ban is the direct result of the CCP’s pernicious behavior towards the Chinese people, the U.S., and the world. The CCP’s cover-up of the Wuhan coronavirus and its flouting an international commitment on Hong Kong with the passage of a draconian national security law have merely confirmed to the Trump administration that the CCP will never become a normal and responsible member of the global community. For the sake of national and global security, the U.S. has to find ways to force the CCP to change its behavior. We believe that a travel ban on CCP members is effective enough to get Xi and the Party’s attention.

The argument that many Chinese people not involved in policy will be unjustly affected by the reported Trump travel ban on CCP members does not hold water. First, the overwhelming majority of Chinese people will not be affected by the travel ban because CCP members account for only about 10 percent of the Chinese population. Second, Chinese people do have a choice on whether to join the Party and enjoy the privileges that come with the membership; privileges in mainland China, however, could soon come with geopolitical repercussions. Third, and perhaps most importantly, CCP members must be aware that they have aligned themselves not just with any regular political party, but a malicious organization responsible for some of the worst human rights abuses in modern history, including mass incarceration and enslavement of ethnic minorities, as well as live organ harvesting of prisoners of conscience. Membership is support, and CCP members cannot claim to be completely guiltless when the Party is taken to task for its crimes against humanity.

Arguments of “racism” and a turning of Chinese public opinion against the U.S. over the reported travel ban are not completely invalid given the present informational and political environment in America and mainland China. While the Trump administration is clearly targeting a political party (the CCP) and not the Chinese people, the CCP and political partisans in the U.S. will nonetheless conflate the two in attacking President Donald Trump, his administration, the Republican Party, and those who approve of a travel ban. The CCP’s near-total control over information in mainland China also allows it to spread false narratives about a travel ban. Of course, the CCP and political partisans will find it much harder to criticize the Trump administration if a limited travel ban focused on the CCP elite is enacted.

Depending on how the Sino-U.S. “new cold war” develops and the needs of U.S. national security, the Trump administration might want to consider a sweeping travel ban targeting all CCP members. If so, the Trump administration needs to implement solutions to identify Party members, answer accusations of “racism,” and even win over public opinion in China. We have two proposals:

a) Support the “Tuidang Movement”

The Trump administration will find it very challenging to identify CCP members with the exception of government officials and prominent figures. Chinese citizens who wish to quit the Party to avoid a travel ban also cannot do so easily or without repercussions.

One workaround could see the administration recognize the “tuidang movement” (退黨運動). According to a 2015 study published in Cambridge University Press’s “The China Quarterly” journal, Falun Gong adherents and their supporters in China have, since 2004, encouraged Chinese citizens “to issue ‘tuidang’ (‘withdraw from the party’) statements, symbolically severing their affiliations with the Party, youth league, or young pioneers as a form of catharsis and a way to clear the conscience.” To date, over 360 million people have quit the Party and its affiliated associations via the “tuidang movement.” Lech Walesa, the former Polish president who led a pro-democratic effort to end communist rule in Poland, described the “tuidang movement” as “history’s tsunami.”

The Trump administration could consider offering travel exemptions to Chinese citizens who symbolically renounce their CCP membership with the Global Tuidang Center. This move would serve to demoralize and further delegitimize the CCP, as well as turn the undercurrent of public opinion against the Party.

b) Enact a “cultural strategy”

The U.S. can show that it genuinely means well for the Chinese people by showing appreciation for authentic Chinese culture and China’s 5,000-year-old civilization. The goal would be to nullify the CCP’s “century of humiliation” propaganda, show the Chinese people an alternative to Party rule and culture, restore the Chinese people’s pride in their cultural heritage.

The Trump administration has made appreciative nods towards Chinese culture. In a statement on June 6, U.S. Secretary of State Mike Pompeo noted that the people of Hong Kong and Taiwan have “common roots in an awe-inspiring civilization that has endured for thousands of years.” On July 16, U.S. Attorney General William Barr said that the CCP rules “with an iron fist” over “one of the great ancient civilizations of the world.” Such appreciative nods, however, are not enough to counter the CCP propaganda and disinformation that would be unleashed should the Party opt to go “all-in” on the “racism” card.