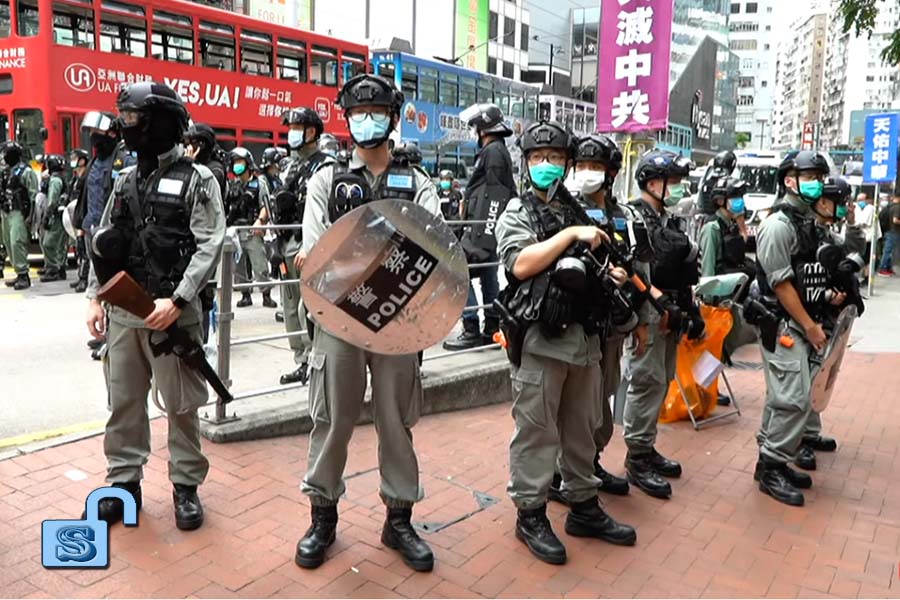 ◎ The international community must join the U.S. in condemning the PRC for pushing to implement national security legislation in Hong Kong.

On May 22, the People’s Republic of China’s National People’s Congress introduced a draft legislation on implementing a national security law in Hong Kong (henceforth referred to as the “NPC Hong Kong law”). The new law was strongly condemned by many in Hong Kong and around the world because its passage means the de facto end of Hong Kong’s autonomous status and the “one country, two systems” arrangement.

In this article, we will give an overview of why the Chinese Communist Party is pushing the NPC Hong Kong law now and what it says about the current state of the CCP regime. We will also look at three ways in which the United States and the world can respond to the CCP’s latest Hong Kong move.

Decoding the CCP’s Hong Kong move
To make sense of what the CCP is doing with the NPC Hong Kong law, we need to examine the move in the context of CCP characteristics, factionalism, and operations.

CCP characteristics
The CCP is a Marxist-Leninist organization whose ultimate goal is world domination. Party culture is defined by deception, oppression, bloodshed, dictatorship, atheism, and never-ending struggle. Much of the regime’s behavior is driven by its instinct to survive and dominate.

The NPC Hong Kong law is clearly an attempt by the CCP to dominate Hong Kong. While Hong Kong is entitled to a high degree of autonomy under the “one country, two systems” arrangement, the CCP has always intended to bring the city more in line with “one country” and away from “two systems” so as to ensure a seamless integration of Hong Kong with the mainland when the arrangement expires in 2047. The pro-democracy protests in recent years, however, appear to have convinced the CCP to move “one country” integration ahead of schedule and bring Hong Kong more fully under Beijing’s grasp. The CCP is also likely looking to more quickly “acclimatize” the world to the reality of its complete authoritarian takeover of Hong Kong.

The NPC Hong Kong law is also born out of the CCP’s struggle with survival. Pro-democracy sentiment is high in Hong Kong, the CCP is no longer confident that it can continue to successfully manipulate affairs in the city through its proxies (there is a chance that the pro-establishment camp will be denied a clear majority in the Hong Kong Legislative Council after elections are held in September). The CCP absolutely will not allow Hong Kong to become what it might term an “anti-revolutionary” base from which the United States and other democratic nations can “subvert” the communist regime. The CCP’s fears are reflected in it constantly accusing the U.S. of having a “Cold War mentality” in its propaganda outlets and foreign ministry statements. Meanwhile, the CCP and Xi Jinping need to create a big distraction to shift domestic and foreign attention away from the regime’s many crises, including a rapidly deteriorating economy, food shortages, rising unemployment and business failures, global calls for accountability on the coronavirus pandemic, and the Sino-U.S. “new cold war.” By keeping the world focused on the fate of Hong Kong as opposed to the PRC and its troubles, the CCP likely hopes to buy itself valuable time to mitigate its crises and forestall regime collapse.

CCP factionalism
Factionalism has long been a feature of the CCP regime, and the factional struggle between Xi Jinping and his political rivals has intensified further in the wake of the coronavirus outbreak. Factional fighting in the CCP gives Xi impetus to take a gamble with the NPC Hong Kong law during a crucial period for the communist regime.

Xi currently has the upper hand in the factional struggle and needs to maintain it. However, Xi does not have anything to show the Party at the Two Sessions to justify his continued strongman rule and the marginalization of “collective leadership”—the Chinese economy is tanking under Xi’s policies and the coronavirus; Taiwan is stealing the limelight from the PRC globally and mainland efforts to subvert Taiwan’s democracy are failing; the PRC is facing international pushback due to the coronavirus, “mask diplomacy,” “wolf warrior” diplomats, and the CCP’s other pernicious behavior; and the Sino-U.S. “new cold war” is quickly heating up. Thus, Xi has to get tough on Hong Kong—an approach that is clearly in the Party’s interests and would allow Xi’s rivals no reason to object to it—to give himself a “win” at the Two Sessions and firm up his authority/“quan wei” in the CCP.

Xi is likely also looking to bring the Party to consensus and in doing so put the factional struggle on “pause.” Without introducing the NPC Hong Kong law at the Two Sessions, there would be a lot of attention on the PRC’s failings under Xi and his factional rivals would be able to zoom in on the failings to pressure Xi to abdicate some power behind the scenes. With the proposal of the new law and the intense global attention to it, however, the Party and Xi’s rivals are compelled to “prefer left rather than right” (寧左勿右), rally around the Party “core” leader, and defend the regime from external enemies.

CCP operations
The announcement of the NPC Hong Kong law is consistent with the CCP’s “advance to retreat” (以進為退) strategy on Hong Kong and other “chain stratagems” that we identified last year. As we noted above, part of the reason for introduction of the law is to create a distraction so that Xi Jinping and the CCP can focus on other pressing problems.

The CCP is also likely betting that the U.S. and the world does not take any real action to penalize the PRC for its latest Hong Kong move based on prior experience. When the CCP moved troops near the Hong Kong border in August 2019, U.S. President Donald Trump called out the move on Twitter but his administration did not appear to take further action. We warned at the time that “Trump’s weak stance on Hong Kong would only encourage the CCP to keep pushing the boundaries of suppression in the city,” and most unfortunately, our analysis was later proven accurate when Hong Kong police besieged the Chinese University of Hong Kong and the Hong Kong Polytechnic University in November 2019 and caused a humanitarian and human rights crisis. We believe that the CCP is again testing the Trump administration with the NPC Hong Kong law because President Trump, despite signing the Hong Kong Human Rights and Democracy Act of 2019 into law, gave the CCP room to maneuver; in a Nov. 27, 2019 statement, Trump noted that “certain provisions of the [Hong Kong] Act would interfere with the exercise of the President’s constitutional authority to state the foreign policy of the United States,” a point that the CCP could interpret as Trump signaling that he might not actually use the Hong Kong Act when the situation arises.

Finally, the CCP is likely gambling that it is able to persuade and influence businesses, investors, and governments into accepting the “new reality” of having a national security law in Hong Kong and not condemn the PRC or withdraw from the city.

The U.S. and the world can respond to the CCP over Hong Kong in three ways:

1. The U.S. must back up rhetoric with concrete action
The U.S. has repeatedly called out the CCP regime over Hong Kong during the anti-extradition bill protests. But the Trump administration has stopped just short of actually punishing the PRC for its actions. The Trump administration’s lack of action to back its rhetoric has emboldened the CCP and resulted in the current Hong Kong crisis. Going forward, the Trump administration must draw the red line and take concrete action against the CCP to make it think twice before attempting to further undermine Hong Kong’s freedoms and autonomy. Sanctioning Chinese and Hong Kong officials for abuses and curbing freedoms under the Hong Kong Act or other new legislation would be a start.

There are promising signs that the Trump administration will take concrete action going forward. On May 27, U.S. Secretary of State Mike Pompeo informed Congress that “Hong Kong is no longer autonomous from China, given facts on the ground” and said that the U.S. “stands with the people of Hong Kong as they struggle against the CCP’s increasing denial of the autonomy that they were promised.” A day earlier, President Trump told reporters that he would be doing something “very powerfully” to China over the Hong Kong issue this week.

2. The world must stand up to the PRC over Hong Kong
The international community must join the U.S. in condemning the PRC for pushing to implement national security legislation in Hong Kong. World governments must also make it clear that there will be steep costs for the PRC if it persists in its current course of action.

Global silence or appeasement over Hong Kong today will only embolden the Chinese communist regime to advance its agenda to dominate the free world and hasten the arrival of the CCP’s so-called “community of shared future for mankind”—a CCP-led world where authoritarianism, ideological conformity, “rule by law,” and persecution are the norm.

3. Shift the spotlight back on the CCP
The CCP is using the Hong Kong national security law issue to distract the Chinese people and the world from its regime-threatening internal and external crises. The U.S. and the world should take the opportunity to use the Hong Kong issue to shift the spotlight back on the CCP and turn Hong Kong into the PRC’s “Berlin Wall” moment. For instance, the U.S. and the world can call out the CCP for taking advantage of the coronavirus pandemic to undermine Hong Kong and step up military action in the South China Sea and the India-China border with the goals of avoiding accountability for causing the disastrous pandemic and advancing its domination agenda.

Shining the spotlight back on the CCP will lead to an intensification of the factional struggle between Xi Jinping and his rivals, with direct ramifications for regime survival. When Xi is eventually forced into a showdown, he will have to decide if he wants to save the Party or save himself.

Don Tse is the co-founder and lead researcher at SinoInsider.

Larry Ong is a senior analyst at SinoInsider.